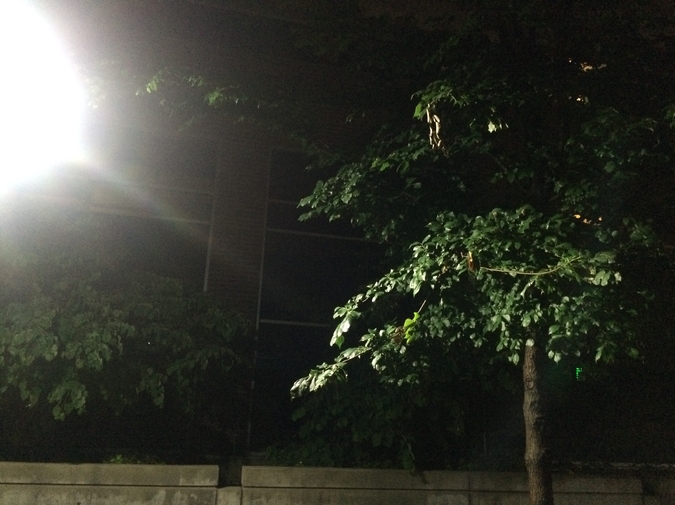 Baby Julia ate the sun in three fantastic bites. She died, of course—you can’t just gobble a flaming ball of noxious gas and live to tell the tale—but not as quickly as one might think. There were days when she simply cried without stopping, sunlight pouring from her eyes and burning her cheeks. Everything she touched burst into flame: her stuffed rabbit, her crib, a passing spider. Her drool became steam and every now and then she’d expectorate a tiny fireball, no bigger than a peanut, which would shoot through her bedroom wall, forming a peephole to the backyard where she had once, not so very long ago, sat in her bouncy chair and watched the clouds turn to circus animals.

Her parents, Mary and Don, were overcome first by grief and then by caution: they purchased fire extinguishers and flame retardant blankets, put the fire department on speed dial and plugged the holes in the nursery wall with corks, so that the angry neighbors could not look in and make a spectacle of their only child. Julia was their everything. Every night, Mary had sat at the edge of Julia’s crib and sang: You are my sunshine, my only sunshine. You make me happy when skies are gray. Now, Mary and Don could hardly look at their baby without going temporarily blind. Whatever Julia needed, they had to simply throw to her, clapping a hand over their eyes as they did. Once, Mary threw a bottle of formula that hit Baby Julia square on the nose. Julia began to cry—she was, after all, just a baby—and what could Mary do? She couldn’t even hold her own baby, because her baby was 3.5 million degrees Fahrenheit—hotter than the summer day on which she was born, when the weatherman cracked an egg on the sidewalk, looked into the camera and said, “There you have it folks. The rumors are true.”

Everything is terrible when your baby is a conglomerate of roiling hydrogen, helium, nitrogen, iron, magnesium, and oxygen, but some moments are bound to me more horrendous than others. Who could forget the time Baby Julia sneezed and a flaming ball of mucus shot through the room, ricocheted down the hallway and exploded near the television? Mary had just bought the television on clearance at Best Buy. Before she ate the sun, Baby Julia had enjoyed sitting before it, mouth open, clapping along to Dora the Explorer or Blues Clues. But now there was only this: a pool of melted silver plastic, glass, black metal—a smear of red that had once been the POWER button.

It was not that Mary and Don gave up on their daughter. They tried everything they could think of: dousing her nursery with a garden hose, surrounding her crib with sodium bicarbonate, YouTubing Native American rain dances which they mimicked half-earnestly in the backyard, thankful, for the first time, for the darkness, as both of them worried the performance might be culturally insensitive. The problem was that any serious action would have killed Baby Julia. You can’t just aim a firehouse at an infant, and you certainly can’t blast her with a fire extinguisher.

When they felt they had nothing left to lose, they came up with a plan. First, they set the air conditioning as low as it would go—30 degrees—so that frost formed on the carpet and windows. Then they drove to the Safeway, whose windows were smashed, cans of green beans and coconut milk littering the parking lot, and bought 44 bags of ice. With the help of a gangly store clerk, they hauled the bags into the back of their Subaru. The car was new, purchased only a month before Julia was born. At the dealership, Mary and Don had imagined a hundred and one ways they’d use the hatchback: hauling firewood, unloading Julia’s graduation cake, transporting the family dog. But this—the stowing of 44 bags of ice with which to extinguish their blistering daughter—was certainly not one of them.

Once home, they poured the ice into two plastic garbage bins which they then rolled into Julia’s nursery. Of course, upon entering the nursery, the ice instantaneously liquefied and they were left with two garbage bins full of water. The water then began to boil and the bins to dissolve. Within moments, the bins had melted down to two pools of bubbling plastic—the water inside long since turned to steam. Mary and Don held each other and wept. From her crib, obscured by a cloud of gassy light, Baby Julia giggled. She liked when her parents came to visit.

And that’s just what was happening inside the house. Outside was even greater madness. Turns out, people liked the sun. More than that, they needed the sun, as did the plants, the animals, the ocean. What people didn’t account for was the residual heat, stored up in the earth’s crust—enough to sustain life for another six months, at the very least. People also didn’t predict that, the afternoon before she passed, Baby Julia would burp up a generous portion of the sun, thus restoring the planet to a modest fraction of its previous brightness. All they saw was darkness, and so darkness was what they accepted as fate.

In this dark time before the burp, everything was chaos. It was not just the stories on the news—people running through the streets naked, fearing divine rapture or aliens or war. It was everywhere, in every corner of the newly nocturnal earth. Coyotes began to howl, bats erupted from their enclaves, moonflowers unfurled with embarrassing confidence. Everywhere—in Indonesia and Odessa and Alberta—people raged with determined fear. Respectable citizens took golf clubs to storefronts, looted bottles of water and chicken noodle soup and industrial-sized jars of mayonnaise. Those who had heretofore conducted polite, scrupulous lives were the very people who devolved the fastest: pushed toddlers to the ground, elbowed octogenarians in the chest. Everyone was shocked to discover that decency and survival were opposite ends of the same teeter-totter.

Meanwhile, Baby Julia was burning but oblivious. How could she have predicted the ugliness of a species that she had only recently joined? She didn’t know the first thing about humans. All she knew, really, was that she liked the sun—the heat of it against her nursery window, the way it scattered the light of the glass hummingbird mobile that hung above her changing table. She liked it best when it caught the stones on her mother’s necklace, causing her mother’s chest to glow a brilliant red. Her earliest memories were of her own hands—yes, her very own hands, to do with whatever she pleased—reaching toward the sun in the morning, her small fingers opening and closing, blinking against the light. Who knew a baby could be so hungry for something so far away? Or maybe it wasn’t hunger—maybe it was something greater, more powerful. Baby Julia was a baby, but even she understood that she was nothing much in the grand scheme of things. She would never be one of the greats: the rain or the wind or the dirt or the sky. But maybe, just maybe, she could participate in some peripheral way—by touching or tasting or, even better, by eating the celestial thing that she admired most. Why not? All around her, things were consuming other things: caterpillars were munching leaves, the mailbox was ingesting letters, the soil was drinking rain. Not to mention that every night, some invisible glutton took another bite of the moon. Eventually there’d be a new one—full and silver and miraculously intact—but without fail, that anonymous mouth would slowly eat it back down to a measly grain of rice. And then there was her mother who, every day, without fail, put the same plastic spoon in her mouth: pudding, applesauce, mashed peas. So why not this? Why not her and why not today and why not the sun?

It had burned at first. As with any exchange of energy, there was a little pain—a moment of hurt before everything cooled and sweetened. Like the time her mother gave her a spoonful of hot cocoa right out of the microwave, or when her Aunt Lenore blew raspberry kisses on her belly. Nothing truly good was painless. Baby Julia was young, but she understood at least this much. Which is why, after that first bite, she did not stop for the pain but instead charged through it, determined to push onward, toward the beauty, the burn, the light.