One Of Those Boys 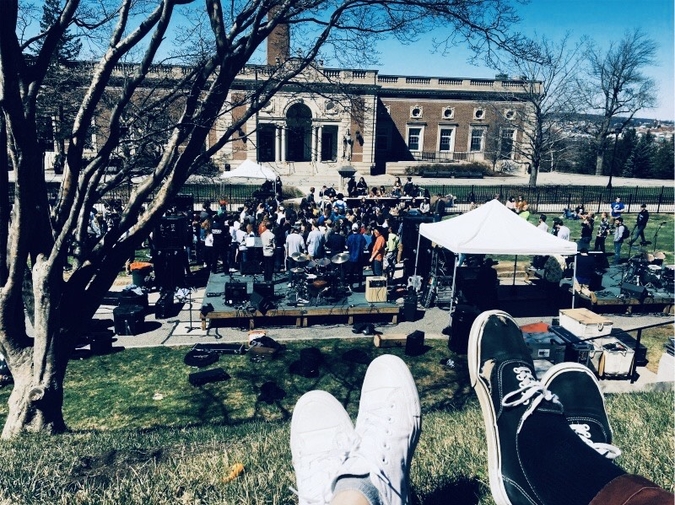 Martin was one of those boys that you forget about almost entirely. For a while, the memory of his touch and the scent of his skin gets tucked away with all of your other old memories, like the time Jacob Sanders rejected you at the sixth grade harvest festival dance. Until one day you remember him, out of the blue.

You see his name under a friend of a friend’s picture on Instagram. He commented “Sick bro.” Despite your better judgement, you click on his profile and then on the most recent post: a picture of him smiling on a white slope with his arm wrapped around a remarkably average, yet still somehow traditionally hot (not pretty, just hot) snow bunny. You remember his piercing blue eyes from those days when you wasted too many nights staring into them and too much time looking at his Facebook photos, trying to figure out facts about him. Your mom calls it stalking, but you prefer the phrase “gathering valuable information about a person of interest in case that information can somehow inform you of something important that he is not telling you himself.”

The tricky part, of course, is remembering what he knows you know and what you shouldn’t know yet but do. For example, the second time you sleep with him, when things are still supposed to be chill, he mentions his family while you two are lying in bed talking.  And you, you nosy son of a bitch, have to pretend that you don’t know that his fourteen-year-old sister is named Amanda and plays field hockey for her school that is a sister school to his all male prep school. Joke to yourself that you are not responsible for your sleuthing habits. Blame the Olsen twins for all their T.V. detective mysteries you lived and breathed as a seven year old. What can you say, you were easily influenced.

Still are, but mostly by men now. After the third time you do it with Martin, you wonder if you are just fuck-buddies, but decide that because you talk rather deeply after your sexcapades, you are probably more than that. But you can’t ask because apparently there are rules to this new (well, new to you) hookup culture. When you first met at a party and made out with him, you texted him the next morning to tell him how much you enjoyed it and that you’d like to see him again. Later, however, he told you that your speed in texting him so shortly after meeting him freaked him out a little. Decide that maybe that’s why he didn’t make eye contact with you when you saw him play in the school band concert the next day, three rows behind your father, who is an alum trumpet player. You were thankful that your father plays brass and Martin woodwind.

Your eagerness is what sent him running away like a puppy with a tail between its legs: your intensity. All the texting and the hanging out and sleeping over is just getting to be a bit too intense. Normally, you would try to hide your embarrassment when he tells you this, but because it was tucked away in a tidy text message, you don’t have to hide your burning cheeks and flighty eyes. Too intense. You read the words over and over again and let them settle in like bugs stuck to fly paper. You consider responding to tell him that he was bad at sex anyway, like a one speed jackhammer. But instead, you say nothing. A non-response will show him that you aren’t as intense as he thought. Maybe you can take all this bottled up intensity and shove it at the next guy who gives you any attention.

Eventually, though, you learn that this then twenty-one-year-old boy’s aversion to your intensity is really just an aversion to commitment in general. Molly told Sam who told Liz who told Maddie who told you that he strung his snow bunny along for quite some time before finally making their relationship official. You also heard that he was trying to fuck her when he was (poorly) fucking you. But when you see him in his neon ski jacket standing next to his average-yet-somehow-still-kind of-pretty girlfriend, you will remember a boy you thought you’d forgotten. He was just one of those boys who really didn’t matter.

Heather Domenicis is a Manhattan-based writer moonlighting at a tech startup. She has lived in four different states and eight different houses and is working on a memoir about her childhood. Her work has been published in Holy Cross’ literary and critical journals. She sometimes tweets.