One Creature's Review of the Denny's Hobbit Menu 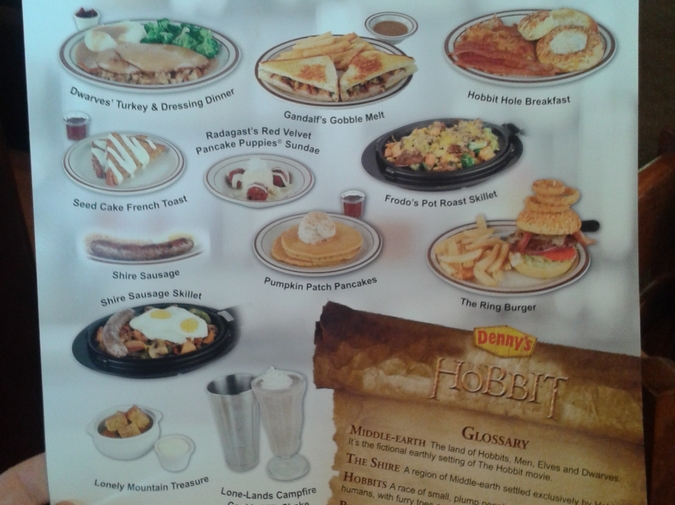 In the original 1937 edition of The Hobbit, Tolkien promises in his description, “If you care for journeys there and back, out of the comfortable Western world, over the edge of the Wild, and home again... here is a record of such a journey and such a traveler.” And indeed he delivers, spinning for us the tale of Bilbo Baggins and his adventures far away from the comforts of his hobbit-hole, taking him, along with the great wizard Gandalf, the dwarf leader Thorin, and twelve other dwarfs, deep into Middle-earth. But Tolkien's genius isn't in question. The Hobbit is a masterful addition to 20th century high science-fiction, earning it a nomination for the Carnegie Medal, mass praise from academics, critics, and English contemporaries such as C.S. Lewis and W.H. Auden. The Hobbit was subsequently published in over thirty languages and since its first publication in 1937, has never been out of print. So, what then? If there will be no talk of Elrond or Gollum, Beom or Bard the Bowman, then what is the meaning of this?

It is Tolkien's promise to take us far away from the Western world, to deliver us from the humdrum of our daily lives, that comes into question. Like creatures of The Hobbit, us humans are carnal beings, deriving pleasure from satisfying our many appetites, including the hunting, trapping, and ultimately killing and devouring of our food. For this humble reader and food aficionado, I felt let down by Tolkien's generic and soulless portrayal of the culinary arts. Instead of anything exotic or unimaginable to 20th-century readers (even something predictable like dragon chops or goblin stews laden with magical herbs would have been a step up), he opted for the easy way out, searching no further than his own back yard, forcing Middle-earth's inhabitants to feast on tea and coffee, cakes and scones. Sound British? Yes it does. Why Tolkien? Why? I respect their insatiable appetites, their desire to constantly consume, three, four, five meals a day: eggs, ham, bacon, chicken, lamb, pork pies, cheese, and fruit tarts, but I am disappointed by the lackluster menu you provided.

Fast forward to 21st-century America; a land of unchecked capitalism, corporate greed, and disgusting excess, where people who have, have too much, and people who don't, will never have enough - a Marxist view perhaps, but I find it fitting. It is estimated that on any given day there are between 1 – 1.5 million homeless and hungry, men, women, and children throughout the United States, searching tirelessly for food and shelter while the rest of us gorge and feast and eat well past the point of being stuffed full of high fructose corn syrup and empty carbohydrates, proudly contributing to America's growing obesity epidemic. It is in this new spirit of America that I found myself treating my family to Denny's on a sunny Saturday afternoon, overindulging on their new Hobbit themed menu, featuring Gandalf's Gobble Melt, Seed Cake French Toast, Shire Sausage Skillet, Hobbit Hole Breakfast, The Ring Burger, Bilbo's Berry Smoothie, Lone-Lands Campfire Cookie Milk Shake, and several others; all of which consist of standard American fare menu items Denny's already had on their existing menu, but recently renamed for their latest promotion. At first I was disappointed, borderline depressive – maybe. I wanted something new and exciting, something to talk about after the fact and recommend to others, but then I thought about old Tolkien and his preference for simple English classics; meat and potatoes, eggs and cakes, then I smiled, finding it truly fitting for Denny's to be the chosen establishment for this new promotion. After giving in to the true nature of the Hobbit, willingly accepting the irony in good spirits, I was ready to devour. 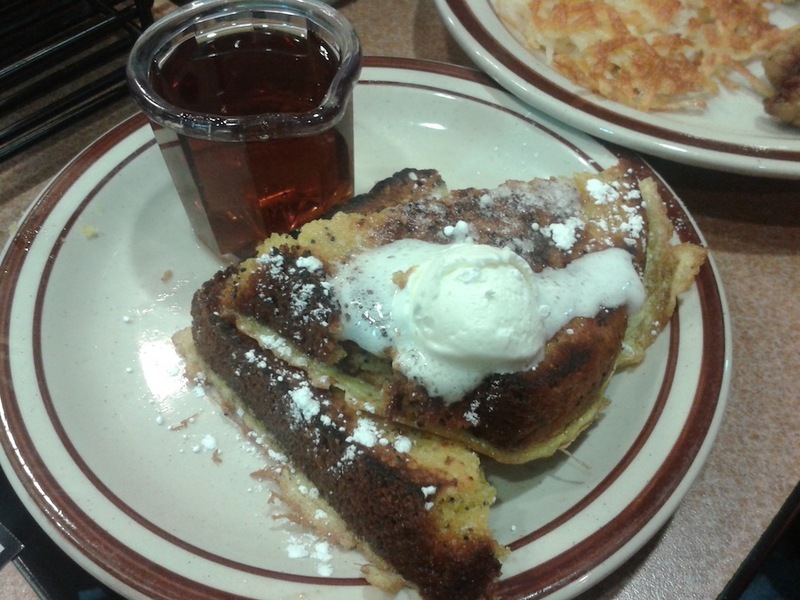 I really can't call it on the Seed Cake French Toast. I'm not a fan of lemon poppy seed, or lemons, or even the color yellow. I admire it as a fire color but it's easily the weakest of the three, not nearly as assertive as orange or as fierce as red. It's just yellow. Flowery and happy and content with its role in the color spectrum. And the lemon, the unwanted nuisance of the citrus world, not good enough on its own merit without needing something to accompany it, to make it tolerable, even satisfying when matched well, but only then. So, clearly, nothing about lemon poppy seed french toast appeals to me. To be fair, I passed it around the table and we were all in agreement. I guess I just don't understand Denny's decision to go lemon on this. There is nothing in The Hobbit to indicate that seed cakes were lemon. Nothing that could even be inferred through context. But beyond that, who really likes lemon? How many people have ever crawled out of bed, shit-breathed and groggy-eyed, yearning for lemon poppy seed? 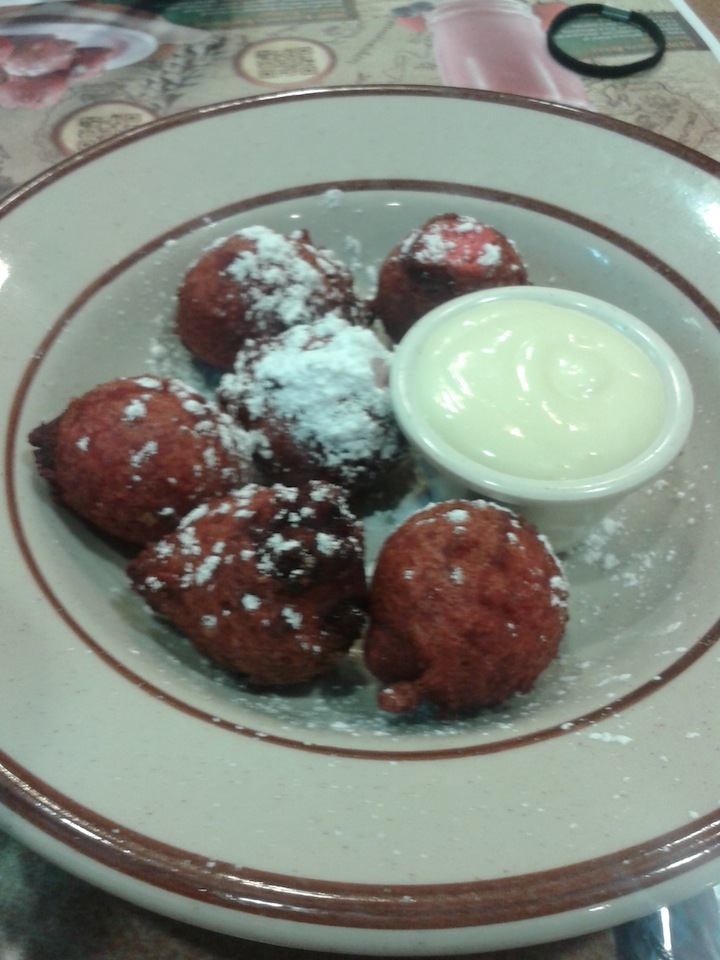 Thirty seconds ago I didn't care so much but I'm a little bit pissed now, a little frustrated. What were you thinking, Denny? Is there an actual Denny somewhere? Well, fuck you if you are out there. Well into old age by now, popping Viagra to get it up if you even bother, keeping yourself awake at night  agonizing over which of your ungrateful children gets the largest chunk of your estate when you finally die in your sleep. Terrible call on the lemon cake. You deserve your misfortune

Thankfully my bitterness and disappointment were short-lived. I quickly moved on to the little red pancake puppies, so fluffy and velvety and sensual, seductively laced with white chocolate chips, lightly dusted with powdered sugar, then dipped in cream cheese icing. If you are out there, Denny, I take back what I said a minute ago. I hope that Viagra works wonders. I hope your wife overlooks your sorority girl mistresses and all of your offspring love you dearly. Immortality is your destiny. 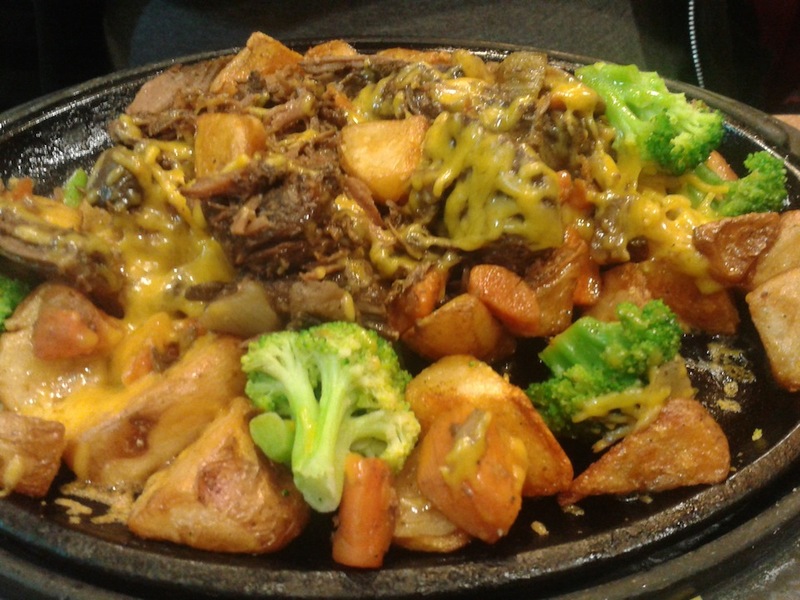 Clearly the most aesthetically appetizing of all the dishes. Also the best tasting perhaps; perfectly cooked red-skinned potatoes, onions, celery, broccoli,  mushrooms, and herb-roasted carrots, served as a sizzler, topped with slow-cooked pot roast and smothered in shredded cheddar. This was my oldest daughter's choice. After trying only one bite she said it was ten times better than any roast I ever made. At first I was skeptical, as chain restaurant pot roast is rarely good. It's always pre-cooked, then frozen, then baked in a tin foil dish and served in its own slop, usually slimy and fatty, lacking in any real flavor other than dirty dishrag. But I had to trust her. She once told me I could go far on American Idol if I auditioned, so really, how could I argue with someone so logical, with such impeccable taste. I took a bite. It didn't blow my mind, but it was better than any pot roast I've ever attempted. I'm a pork guy, so I'm not ashamed to admit I've been bested by Denny's. And truth be told, haven't we all? 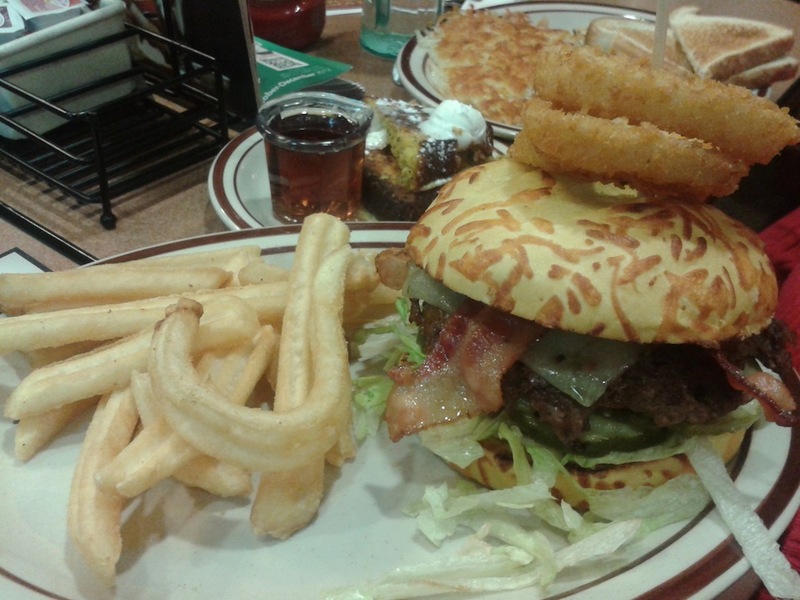 If you like Denny's burgers you will like this and if you don't then you probably won't. Nothing too far from the norm, hand pressed burger topped with pepper jack, bacon, mushrooms, and mayo on a baked cheddar bun. There are a couple deep-fried onion rings thrown on top for good measure, something to justify the “Ring” in the burger's name. It also came with fairly thick, wavy fries which were “fantabulous” according to my youngest daughter. This was her choice. She also said the burger was too big so she had to dismantle it and eat it in smaller parts which we all know compromises the burger experience and the overall taste. Burgers are a work of art, each one hand crafted according to a master plan, cooked and seasoned and dressed and served with maximum strategy. Part of the enjoyment is taking ferocious, full bites, experiencing each individual flavor and texture as it was intended. And with all that said, she just wasn't a fan of the burger, but because of the aforementioned issue, I had to try it myself. It was average. It won't fuck your skull in half but it won't hurt your feelings either. Denny's Macho Nacho burger, which I tried the week before, was much much better. A truly artistic feat, a juicy burger topped with cheddar, lettuce, sour cream, pico de gallo, jalapenos, and tortilla chips, all smothered in chilli – a masterpiece. So no, the Ring Burger wasn't that, it didn't get my dick hard and jerk me off under the table, didn't leave me craving another, which was unfortunate, but not entirely unpleasant. 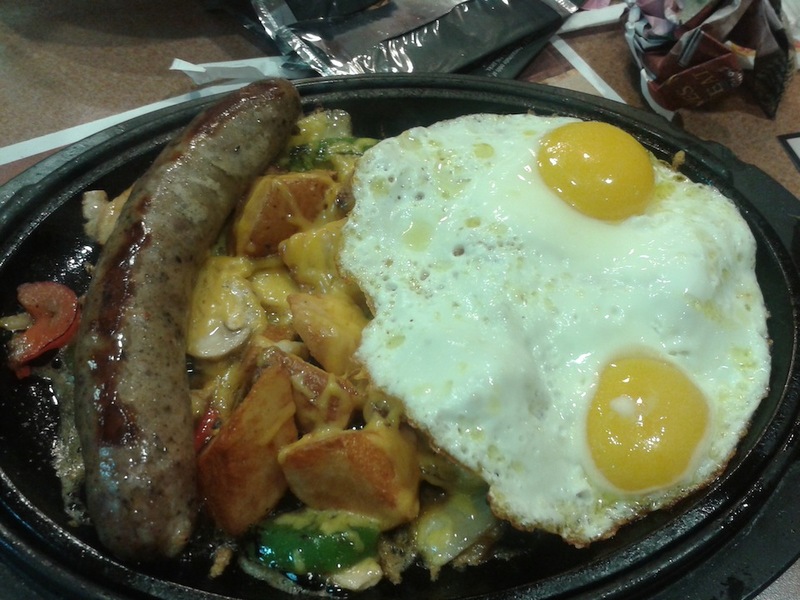 Unimaginably average sausage and eggs served over boring, butter-substitute saturated potatoes, mushrooms, peppers, and onions, topped with shredded cheddar. I didn't even bother to finish, although the eggs, cooked sunny-side up (dippy eggs if you feel me), were aesthetically pleasing. I had a mini eyegasm. But the real problem wasn't it's blandness or general lack of flavor. It's major downfall, at least for me, was the way it was served - a sizzler. Everything was piping hot which seems like a good thing, but I'm not a fan of really hot food. I don't want blisters or a scorched tongue, I don't even want to blow on it first. No hot foods, no ice cold beer. I prefer both at regular room temp. Oh yes, I almost forgot, the wheat toast was stellar. 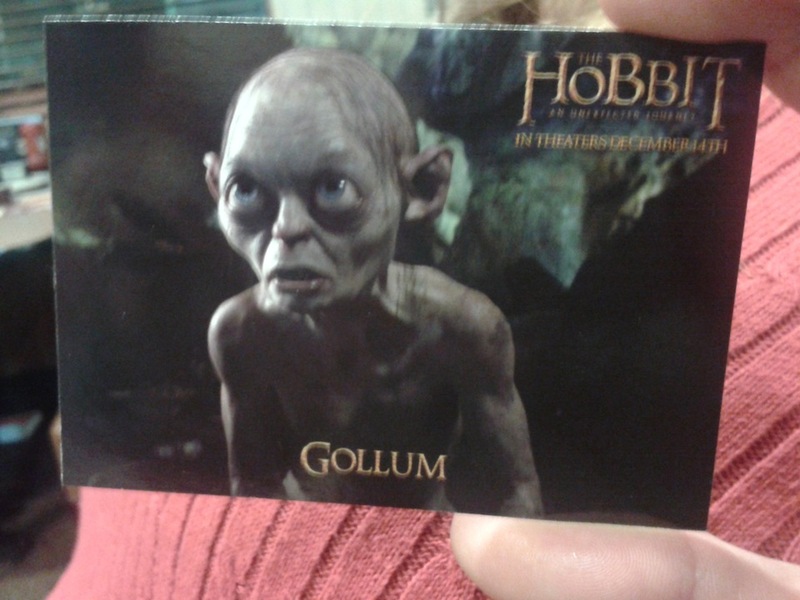 With every Hobbit menu meal ordered, we received a pack of Hobbit trading cards. They exceed the quality of most regular sports cards, even Skybox, which are historically of high-quality. Bright colors. Full gloss. Gollum was my favorite. I was most disappointed by Bilbo; Tolkien makes it clear in the text that Hobbits are tiny little fat-asses, so there's no justification for turning Bilbo into a mini Martin Short. Fuck integrity I guess. I mean, it's nowhere near the biggest book to blockbuster film-casting blunder, it's not as shitty as Johnny Depp murdering Willy Wonka or Josh Hutcherson destroying Peeta Mallark, but it was a huge let down. Bilbo aside, I can't complain, in every pack there was a discount card, one of which gave us 20% off our total bill. Win.

So there it is. I wish I had some clever summary, some words of wisdom, some way of transforming my experience into something more, something meaningful, something bigger than what it was. If only I could equate my actions and emotions to Tolkien or his characters and make the entire experience a metaphysical one. But alas, in the end it was a middle-aged man taking his family to eat at Denny's because he loves spending time with them and he loves chain restaurant food and if he can enjoy both at the same time, why not?