On the Yard (An excerpt from The Great American Suction) 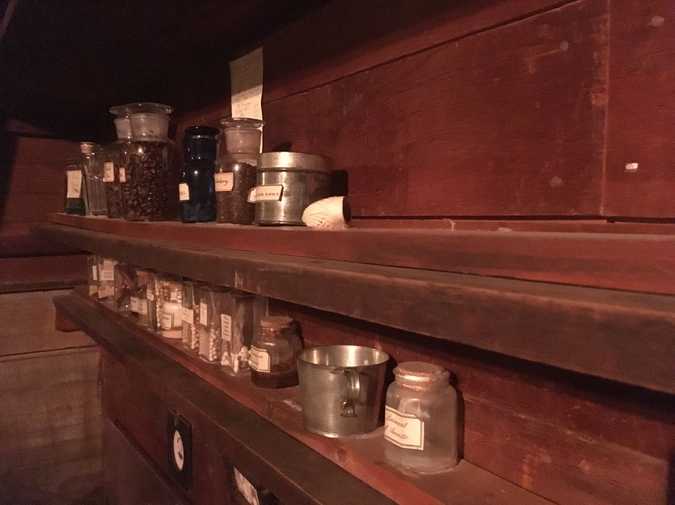 Shaker rolls belly up in the sunlight. He can visualize the narrow range, one yard to another yard, his purview. He plumbs his mouth with a knuckle. He takes his air in meek lungfuls, like a beached goldfish gasping through a mouth-hole too small for its face. This face is not much in aggregate. Very little percolates under it. Conversely, a fleet of miniature aircraft continues to wheel several miles overhead. Their contrails are daubed across the sky’s concavity and beyond, reminding Shaker of his favorite brand of commercial toothpaste.

Let go my purview, he thinks.

He doesn’t notice the Hooster woman until she scoops his head into her lap. She tilts him backwards, reaches into her zebra-print bathrobe, and produces a thermos. The monochrome construction-worker kind. The thermos cap is affixed with an absurdly long crazy straw. She stabs the novelty item into Shaker’s mouth with a great deal of relish. Shaker sips the apricot swill and blinks his approval. The Hooster woman cradles him tenderly, picking the mulch and dried tear dew from his cheek.

The mongrel dogs that besieged his home are gone. The home is gone. Shaker’s half, anyway. He returned this morning to find the duplex riven in two and his part vanished. Just the shared wall and its ugly lime paint are standing. Each of his rooms has been thoroughly bulldozed, the debris and dirt carted off, plumbing pipes and electrical wiring sucked back into the soil, and neatly. The remaining hardwood floor is blackened with an earthmover’s tread, naked to the elements. Shaker feels like all the near and far cataclysms in his life are aligning, end to end, a spooky eclipse. And maybe he feels some reassurance in this.

The Hooster woman kisses his brow and returns him to his moldering spot on the ground. There is some kind of sofa sham underneath him, a homemade needlepoint. It is stitched with Day of the Dead sugar skulls, perky and bejeweled. Shaker closes his eyes and listens to the sound of the woman’s slippers padding away across the grass. The door to the former duplex shuts. Shaker is alone with the dirt and the mulch and the dark business of his own body. He can feel his heartbeat all the way up in his armpit. The gaps between his ribs are filled with toe jam. Blood spurt, muscle hum, an idiot drone. His interior currents won’t abate.

Shaker cannot remember the last time he utilized a straw that didn’t somehow end up a nostril.

Tonight, the Hooster woman and girl are filling their share of the ex-duplex with insistent bicker. Shaker can hear them from the yard. He understands the general tenor of the argument, but the petty details elude him. Competing strains of dancehall music shiver up the walls. The woman and girl bark in the same brittle register, their voices acquiring strange regional accents the louder they go. They bang their silverware and take turns slamming the toilet seat. They drag their garbage bins too late to the curb and leave them abused by stark weathers all week. Shaker knows there is an awkward progenitor situation. He knows these arguments reduce to smaller and smaller themes. Like Shaker, their household is held hostage on a daily basis by the bloodless whims of the banal. Do the woman and girl also shun rayon? Do they believe the skin cream commercials? Should it be a turnpike world or a trolley world? Margarine or the other stuff? Some evenings—after a long day of dwindling portions—the banal buttresses them all quite nicely.

Breakfast is wheat toast saturated with cream cheese and jelly and a side of scrambled brains. This morning’s negligee is patterned in cheetah. The Hooster woman really layers on the perfume, a debutante fragrance with floral accents to which Shaker has grown addicted, sniffing at the aroma she left in the yard. He licks his dishes and cutlery spotless and dries them with his shirt. All her fine china is arrayed tidily in the grass. He regulates his breathing to a steady bombast. He tells himself if he ever rises and returns to civilization, he will purchase this woman a modest outdoor patio set.

Lunch, however, does not come. And when dinner isn’t delivered, Shaker begins to worry he has broken decorum in some significant fashion. Maybe he was supposed to return the silverware by pitching it underhand into one of her open windows. Maybe he should have flashed around that dimwit smile of his, or said please and thank you, or vetted the newspapers that are amassing atop him in the yard. Shaker has slipped into too many kinds of flux. The flux is the only interesting thing about him. Shaker sits up and enjoys the tilt of purview. From this vantage, it’s much easier to hear the impatient throat-clearing behind him. Shaker crabwalks a half-circle. The Hooster woman is lit diagonal by porch lamp, a Rorschach blend of panda prints and lacy underthings, bare leg thrust out.

“Well?” she says. “Are we gonna pity-fuck the sadness out of each other or what?”

Shaker shakes the muddled blood from his brain, fixes his hair, and follows her to bed.

The Hooster woman’s bedroom is a mirror image of Shaker’s old abode. Same marled plaster ceiling and layout and dimensions, only backwards and stained with nicotine colors and smells, drizzle leak. Shaker barely notices the uncanniness of it. The sex is not surprising, either. The dirty flirters, Shaker has found, are usually the most missionary partners. They exhaust themselves on eighty different ways of uttering “mount me” until there’s nothing left to do but lay stiff-spraddled and ride out the long fuck. The long fuck is actually quite agreeable. Shaker is also partial to the woman’s post-coital coos, even if they are babbled in her sleep. He gives her a deep nuzzle and licks an earlobe. She coos more loudly, and he kisses her neck. Then he carefully pries the blanket from underneath her snoring body, capes himself with it, and returns to the yard.

When the rainfall finds him, it arrives sideways and in syncopated bursts spritzing him in the face, so he belly-worms over to a dry swatch of grass where the yard sprinklers cannot harass him. A note, he realizes, is pinned to his shoe. Shaker looks back at the half-house, the road, but the messenger has disappeared. The sprinkler water has blurred much of the note’s contents. Shaker wrings out the sodden sheet, flattens it, holds it up to the sunlight, and squints.

Sorry about the house, chief. Just doing my job. I tried not to damage the landscaping too much. My employers are really satisfied with the project. There’s a group of them, a kind of committee. I realize now you don’t remember what you did to deserve all of this. Too late to worry about it, I guess. If it’s any consolation, they’re all pretty nice folks, and they pay well. If you’re ever looking for a little work...

Shaker balls up the note and eats it for a noontime snack.

Shaker’s torpor is interrupted only by the mailman and local children at play, garrulous dog-walkers dragged along by their yipping, leashed packs. He also has a fuzzy recollection of an unknown pedestrian trying to scalp him with an ice scraper, but maybe that was a fever dream. Shaker suspects the attack would have been totally justified, although he’d rather not investigate the exact source of his remorse. He just knows the remorse is stashed away in a mungy pit far inside him, accruing interest slowly—moss and lice, too—for review at some future date.

Twilight, crickets, frostbite, and so forth. Shaker has fieldstripped a candy bar and now munches it under a dome of cosmic darkness. His legs and feet are dew-glazed into the yard. Mosquitoes in tactical formation are feasting on every inch of available flesh. Shaker has never been much of an outdoorsman, but recent events indicate he may have a potential career as a kind of vagrant survivalist or suburban bandito. He envisions himself trekking across deluxe USA tundra in a ski mask and camouflage poncho, shaking down paperboys for pocket change, heisting Girl Scout cookie deliveries. The fantasy culminates in a pack of angry villagers following a trail of snack crumbs up to the Hooster yard and discovering Shaker smeared in melted chocolate and peanut butter, an invasion of pigeons orbiting him in biblical indictment. Then lightning, a last judgment, a grudging rest. Maybe a grudging reincarnation, too.

For hours tonight, Shaker has stared at the gaping hole where he used to have a home. The Hooster woman is AWOL. The Hooster girl does not appear. Shaker knows the daughter is barricaded inside her bedroom, curled under the television’s radiant beams, hiding herself away, and she’s very right to be. He could visit. He could stand and walk the thirty impossible feet. He could even apologize for pity-fucking her mother and being pity-fucked in return. But he’s too busy dwindling into smaller and smaller iterations of mopey, hamstrung anti-being.

This nonsense, he thinks, could be contagious.

Bandito or no, I am not healthy.