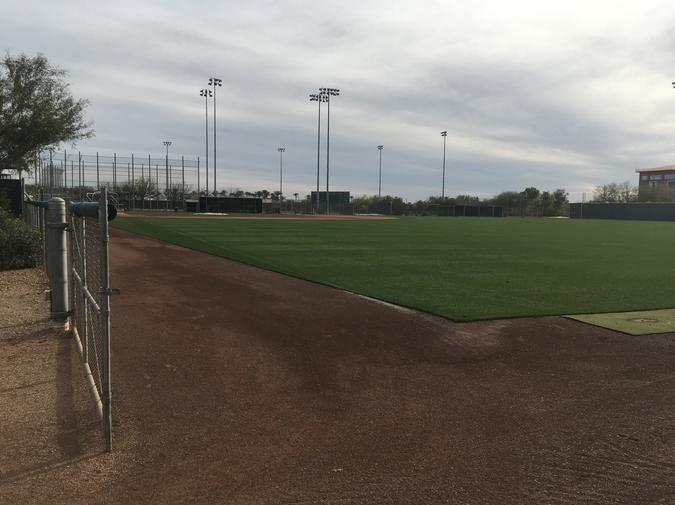 At the top of the hill from my house
was a baseball field we called First Field.
We played there all the time. No adults
allowed. I learned how to organize groups.
I called up my friends and set up games.
Everyone was welcome. No one was cut
in this league. Right field was split in half
by a hill. If the ball went down the hill,
you were out. Once we gathered up tools
and tried to dig up the grassy bumps.
We dug from first base to half way
across the infield before we lost our energy.
It stayed that way. One day someone asked,
Why didn't we start from third base?

I still have a scar on my left knee from when
I made a great catch in center field and landed
on a piece of glass. Then there was the time
my friend clocked me in the skull with a bat
while trying to stop six inches from my head.
A large pile of rocks was out in left field--
our Fenway Park wall. Hit a fly ball in there,
it's a home run, a ground ball's a double.
The thing I remember the most about my
first home run was how I saw the ball
make contact with the bat. When Ted Williams
talked about just such an incident, I said,
Yeah, I know all about that. I did the same thing.

Second Field was used by the town for
recreation. My Dad played in a softball
league there. Left field was a long home
run over a twenty-foot cliff. There was
just enough dirt at an angle so that you
could run down. My dream was to make
a back-to-the-plate-one-handed grab
to rob someone of a home run while I
jumped off the cliff and miraculously
survived landing in the dirt below.

A Visit with my Dad

When my dad was dying from old age
and Parkinson's disease, we visited Second
Field to see what the town had done to it.
Kids were now playing baseball here
on computers in packed apartments.
A little grass remained near the cliff.
I asked my father to tell some stories
about his days playing here. When he
did not respond, I turned to look at him
and saw that he was crying. I turned
my head back, stared straight ahead,
and joined him.

Jimmy Pappas served during the Vietnam War as an English language instructor training South Vietnamese soldiers. Jimmy received his BA in English at Bridgewater State University and an MA in English literature from Rivier University. He is a retired teacher whose poems have been published in many journals, including Yellowchair Review, Shot Glass Journal, Off the Coast, and Boston Literary Magazine. He is the Vice-President of the Poetry Society of NH. His poem "Bobby's Story" was one of ten finalists in the 2017 Rattle Poetry Contest and was the winner of the Readers Choice Award.