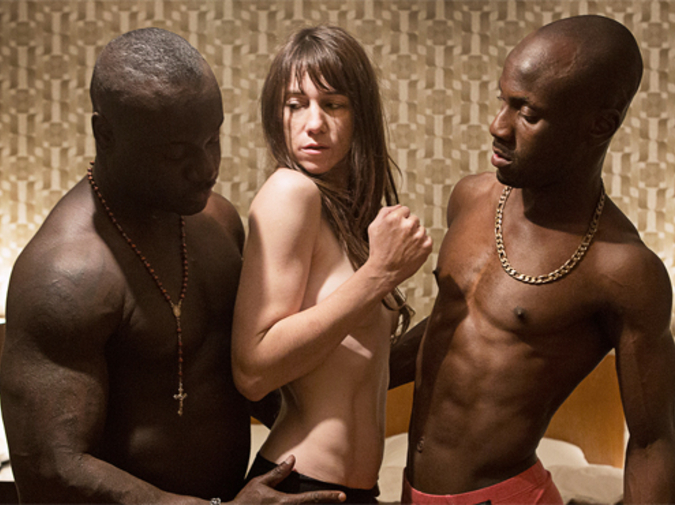 Why is Von Trier my man? He’s my man whose bruises I refuse to conceal. I have no debate or defense, he’s atop me. I must strangle myself in his defense. I spoke to the great Jereme Dean, keeper of preeminent film knowledge, briefly on this matter. I am of the impression Dean opposes Von Trier. Here’s my theory by which I beg: Jereme and I have the ghetto in us. There’s a symptom of the ghetto that raises some to know and love film above all. Perhaps alienation, human devaluation – all this good stuff, whatever it is; I have met occasional others like us in this regard: well-goddamn-versed in scum thru artsy. When video stores existed, and tell me if this is true country-wide, ghetto locations always had the best stock. (I had a combination pawn shop one with a lot of murder in it.) Hopefully our violence led us here. No one was trying to make us cum when they hit us. But I fear my ghetto is a tad lacking. We can both fuck without wearing our white, but I’m weak enough to sometimes conjure undisclosed permissions. Von Trier often speaks sexlessly because he bends a concept into art. There are ideas floated in the painting. There is less sex to him, a detachment by which he divides brain from corpse. If this plays as intellect tripped while prancing, too much air in the poem, I score my admiration without consent. Yet how dire and sensual this affliction. And those random petty others doling penny-ante twinkles. A man, my Von Trier, nary encapsulated by the mistakes an internet might taper about him. Phew, I’m doggy paddling the maestros these days. His volumes bring metaphors panned from sex and back under without the necessary hearsay throat in tow. Sigh – he’s bashed his catalogue into verse at the cost of being liked. However it happened, I was born to lick him. Uma Thurman’s scene in this movie is among the top jealousy ever filmed. Jealousy is the ninja star I can’t pass. I’m only above sharing if a militia’s behind me. Her scream is so abandoned I mailed myself to it. And give Slater more fucking work. Shia’s a weird little fellow. I don’t know. He doesn’t bother me like he should. Franco bothers me when he directs because he can’t, and also he urinates a shilling on art people bled to bleed. He has intentions and brings attention to something so far below his pretty, unhurt face – The world just wants your face, you survivable cunt. With his fade in and out of the Brooky Bridge, Kinko’s Tarkovsky shat a blow job, and split screen Faulkner with the same fucking shot failing to connect on each side, god fucking damn it. I hope, this, okay, we can all agree, and I’ll stride my clit on this easy bus because it’s fun: Franco, so far, As I Lay Dying and Broken Tower in particular, officially defines the idea of pretention and pretentious art. There are opposing approaches to art, but can we take this to bed? I’m a big art for art sake guy, but my side stops with Franco. I’m sorry he was allowed. But aha – now look at my Von Trier by comparison!