Nothing Has a Location Until It Is Observed 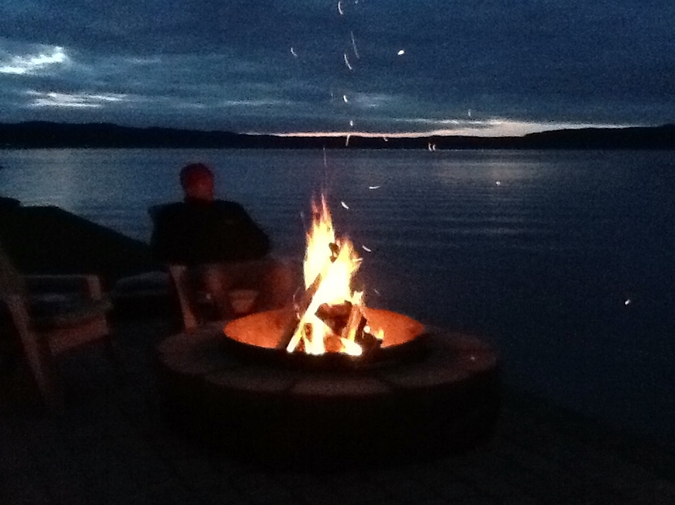 When Sophie arrived home from the Strange Charm concert, she realized she was now in possession of an uncomfortable secret. The next day at work it replayed in her mind at least a hundred times. She missed a meeting with her boss, skipped lunch, and by the end of the day she understood why people went to Confession.

On her way home, Sophie received an invitation from her friend Erin to come over and sit around the backyard fire-pit. On arrival, Sophie went straight to the cooler to grab a can of Rainier before joining the group. She pulled up a folding canvas chair, which creaked as she fell back into it, and kicked off her shoes. The dry grass tickled her toes.

She pushed the secret away and focused her whole attention on Erin, who was explaining how electrons were both particles and waves. Sophie listened for a time but was not sure she understood. She interrupted Erin. “So wait, when the electron was shot toward the two slits, they got an interference pattern—meaning a single electron went through both slits?”

“Yeah. But when it was observed, the electron just passed through one slit or the other, like a particle.”

“A wave represents all possibilities. But when the electron was observed, it had to make a choice.” Erin looked at the fire. The logs had burned down to smoldering red chunks.

“How’d you all get on the topic of electrons, anyway?”

Erin pointed at a dark-haired woman across the fire, “Tina’s writing a novel about parallel universes. There’s a universe for every choice we make—into infinity.”

Sophie finished her second beer and stared into the embers, “Do you really think when something is observed, it has to choose?”

“A universe for every choice…” Sophie squinted. She was drinking on an empty stomach. Erin was quiet and Sophie could not stop the words from bubbling out. “Hey, you remember that Strange Charm show last week?”

“The one at the Neptune? Why?”

“I feel stupid even saying this.” Sophie’s face glowed red in the firelight, hiding the flushing in her cheeks. “But you know Henry?”

“Well, he came up to me—he was drunk—and said that he loves his girlfriend, but that he thinks we would have been a good couple, you know, had things worked out different.” Sophie looked away.

“Maybe in a parallel universe?” Erin said, the hint of a smile on her lips.

“And then they drink too much.” Erin held up her beer. “Cheers.”

“Cheers.” Sophie lifted her beer too. “You know, we’re like that observed electron. We only get to go through one slit.” Sophie picked up a log and threw it on the fire. A hundred thousand burning particles erupted into the night and Sophie tried to watch them all.

Andrea Eberly lives in Seattle, Washington and works as a clinical pharmacist in emergency medicine. This is her first published fiction. She is working on a novel set in late 1990s Germany.