Not Hearing the Jingle 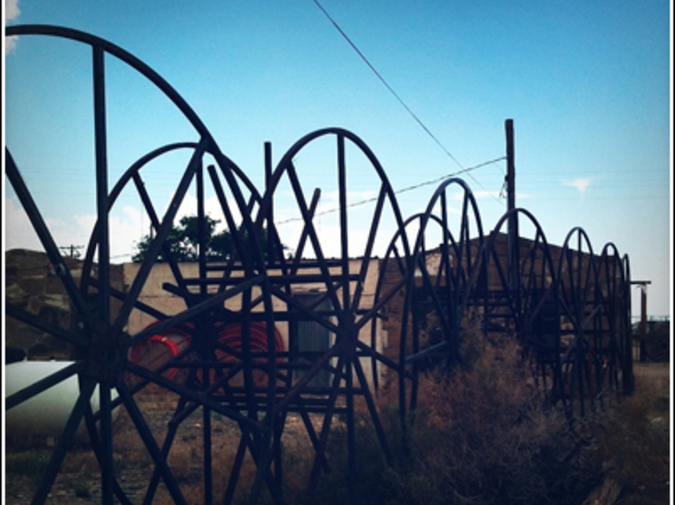 In the old yard adjacent the high school sat a green-metal box that housed an emergency generator. At least we always said it did, though I’ve unlearned plenty since those days. Used to we’d hang there after school, waiting, though I’m not sure for what. Faces, the names I knew, those kids, they mostly footed it home, as we all lived close to campus. I can’t fathom it now, but must’ve been we’d a reason to toil there in those hot afternoons, the yard so dry from sun, the sky an anemic sheet of cloudless blue sprawled above. I remember the wind stained by white dust that’d blow in from the parched citrus orchard beyond, so the air, powdered and grainy, struck your eyes as an accident may, as though the world would swing up like a mess of barbed wire uncoiled from its post.

A girl. Sally Mixon. Atop the box. Her feet dangling, kicking a bit, drumming against the green-sheet metal, a smile on her face wide as a sunset, her shoulders pumping like alternating bolls in the wind. She sang a bit of song. Something I know I knew at the time but now can’t remember. An upbeat thing. She smiled, and then, as rows cross, our eyes, loose with immaturity, touched from their distance, and my shoulders got hotter than a summer-time scarecrow’s, and her face went red as the clay could, and then a washing, no water, but a washing, the way air from a cold building cleans you of the heat in the doorway, though I know the temperature didn’t change. I remember thinking, at the moment, that something would come of it. I put a hand in my blue-jean pocket and shucked my shoulder, confident, waiting for a word from her to come. But silence. A hollow. And I kept throwing my eyes at her, but for nothing, no connection, like trying to fish dropped keys from a blind crevice with a clothes hanger and not hitting the ring. Not hearing the jingle.

When I’m alone, just me and the pillow, the fan blade above swinging, between the clock telling me to bed down and the alarm telling me to rise up, I wrack my mind for the song. The tune of it sillies me, and time wisps away, and I can’t find a name to call it. For a while I thought, if I heard it again, I could hunker down like a fresh-ginned bundle and quit moving forever.

My bartender heard me on the subject a time too many and slammed a telephone book down in front of me and asked me if the girl was from around here, because no one from these parts ever moves on, and that I could probably find her or her folks, call her up and just get it over with. Said he was sick of me half in the bag with a quarter in my hand, flipping through albums in the juke box and never picking a song. Said that when I’m deep in the liquor I drag strangers by their arms to the stool aside me and hum at them and ask if they know the tune, and when they stare back puzzled I hum it again. Said it was pathetic. Embarrassing. But faced with it that way it seemed part of me didn’t want to know. Truth isn’t always kind to memory.

I met an Argentinean immigrant at a cantina in the border town of Nuevo Progresso, which sits right on the Rio Grande about an hour’s drive from the Gulf. It’s a heap held together by tourist’s dollars. Mexicans selling cheap blankets on the sidewalks, and knock-off name-brand purses, and watches, and sun glasses, and seven-year-olds running around selling gum or begging nickels. I was down there with a friend who said he knew a place a fella could buy a blow job, but we just went to a strip club that had porn playing on lots of TV screens and had women loafing around that looked like nieces of gas-station attendants who worked part-time changing tires, and I wouldn’t pay to touch them. My friend must’ve though, because he disappeared for a stretch, came back grinning, and he was whistling when we walked away. The Argentinean stumbled up to us in the next bar we stopped. He was a tiny-tanned thing with ears like empty leather gloves. He asked for a cigarette, and I gave him one and shook his hand. His fingers like the tines of a baby pitchfork. Sprawled, gnarly and firm. He sat with us a minute blowing smoke rings and swilling tequila, and we got to talking about the Pampas, and how they look like South Texas, and I asked when’s the next time he’d be going back, and he shook his head no. He said too many years had passed since his last trip and that if he went back now, and saw his old friends, how they’d gotten on, and he was surrounded by their age, all those ears like empty gloves and baby-pitchfork handshakes, that it’d drought him of his youth.

A couple of months back I saw Sally Mixon from her blind side walking the rows of a carniceria—a Mexican butcher shop that sells beef cuts white folks consider scraps for grind. She had a child with her and I sort of followed, her body beyond bloom, spread out like worn cloth. I don’t think she saw me. I kept my head low till she left and then bought some cheeks to braise. I wonder how it’d have done me, if I’d heard her voice. If I’d gone up and said hello? What would she think of me, and I of her? Would she think that my face had weathered? Would I think that her eyes had dried? Would she notice my dipped shoulders and pouting belly, and I her flaccid arms and sagging throat? Would we stand there in the smell of meat, the fluorescents humming and the air-conditioned air and the soft lull of a corrido crackling through a radio speaker from somewhere behind the butcher’s counter? Would she introduce me to the child? Would I know the child’s father? Would I ask her about the song? Would she even remember? Could she sing it? Could she sing it to me then? And would her voice make fade the smell of beef blood and fill the store with powdery sunlight? Or would she sing it, and nothing, her voice lost in the fluorescent hum, her arms jiggling at her sides? And in finishing the tune would we be swallowed by a difficult silence, our face muscles heavy, our skin hot, left with no option but to push our carts towards aisles of opposite direction, and would the old memory be dulled for me?

Last week they harvested the cotton fields. I parked my car and watched the machines offloading the haul. It’s been a stretch of years since I’ve done that work. Now I sublet the land and take a percent of the yield. My father though, he was a farmer. He used to come down with a thermos of coffee and work alongside the hands and try to keep them straight. But I’ve never been keen on it. The best part of the harvest is when it’s over and the tufts of cotton that blow off the bails litter the field edges like mounds of old snow. Once I asked my dad why we didn’t have the hands pick up the blow off and add it to the rest of the haul, but he spit and told me small things are easier to let lie. Of course he didn’t always follow his code. Once he got to arguing with a Mexican hand over 18 dollars difference in day’s wages, and my father got mad and threw out a cup of coffee, and I don’t think he meant it, but it splashed against the hand’s son’s face, and then the Mexican pulled a knife and sliced my father’s throat and he fell to his knees and bled to death on a bale. Died before an ambulance could come. I watched it, but I can’t really remember what I saw. Red I guess. Some flailing. I was a few yards away. I do remember watching the Mexican run after he’d cut him. He dragged his son by the arm and they headed away from the road. Slipped over a few fences and ran deep into farmland. But the law caught them within the day. The father they sent to Huntsville where he was put to death. The son they roughed up a bit, but he still lives in town. I see him from time to time. My guess is he picks cotton, same as his dad did. He always tips his hat at me.

Brian Allen Carr's story collection Short Bus is forthcoming from Texas Review Press. His stories have appeared or are forthcoming in Boulevard,Texas Review, Keyhole,Gigantic, NANO Fiction,elimae and others. He can be found online atwww.brianallencarr.com. He is fiction editor of Dark Sky Magazine and assistant editor of Boulevard.