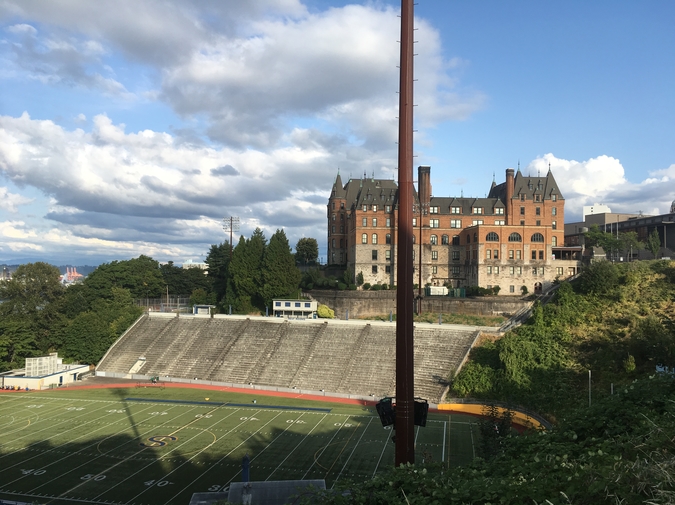 In one of our earliest days of emigration, after a day trip to a medieval monastery, we found ourselves in a sort of pub. It had been so inspiring to see where some of our greatest clerics had come from that we had almost forgotten to eat.

We were short on cash—Large-John my husband would call it—but had enough for petrol and lunch.

I ordered tripe and, as I had recently discovered was custom, Calvados.

‘Le Trou Normand,’ I said to the Garçon, winking knowingly at him.

When the bill arrived we had to call him back to check, we were so shocked at how expensive the Calvados had been. I waved the bill in the air saying it had better include the recipe, trying to think of the french for ‘recipe’ but only able to remember the English. All we managed to get was a list of ingredients.

What I have now is a rough approximation, but everytime I make it I remember driving back to our cave through the beautiful falling leaves, laughing about the price of Calvados, forgetting all we had left behind.

Before we came, I was undergoing this fertility treatment where I was injected with Nun’s urine. They used it due to the purity.

A day after the first dose my stomach swelled as if I was eighteen months pregnant.

At the hospital they drained seven litres, after which I demanded my husband go to Safeway’s and buy a block of cheddar, a bag of ice cubes and a bloody steak. They reminded me incessantly of the listeria diet but right then just I didn’t care, I had an insatiable appetite. In quick succession, I ate the lot in their entirety. The nurses just stood there, agog.

I had a craving for raw egg too and I wanted nothing more than to feel the slip of it down my gullet as I swallowed, but I saved my husband the trauma. He cannot stand to even be in the same room as an egg, on account of his being a chicken. Maybe that’s why the Nun’s urine never took, although the doctors didn’t seem to think it would be an issue.

His phobia, as he likes to call it, has come to be such a problem that after we first moved here (as we had agreed to, if we couldn’t start a family) and he got wind of Madame Poulard, he refused to even visit Mont-St-Michel.

This winter, I went on my own to enjoy a belly full of fluffy eggs and a brisk walk along the seafront, while it was still out of season. Tourists drive me batty with their parasols and stench of factor 50.

One day this spring our fellow cave dwellers invited us out to watch a bike race.

The weather had been unpredictable up until then but it was the first day of the year that the temperature had risen above 20 degrees, or so the flashing green cross outside the pharmacists had said.

We decided to take some food even though they told us not to worry. I came up with this recipe myself using some leftover bread and pears from the orchard down the road. It carries the double benefit of being very portable and essentially free.

In a field beside a farm road just outside the main village, someone had set up a gazebo. A radio with distorted voices played.

We kept looking down the road as we chatted and had a few midday drinks.

After a while, a cloud of dust clustered in the distance. It got closer and we all started to crowd the edge of the road. A car drove past. Then a cameraman taking a backie on a moped, followed by five cyclists. Suddenly the noise was deafening. One of the boys that often played outside our cave was standing a little further down striking a pose that seemed almost Olympian as he cheered on the athletes; one hand was raised and clenched while the other was behind him pulling the lead taut on their miniature schnauzer who was cheering like the rest of us, even my husband, who was squawking and clucking like he had a bit in the race.

After the initial five there was a pause and the noise died down. There was laughter and a few phrases from the locals that I didn’t quite catch. Another cloud of dust was in the distance and the boy kept jumping and pointing and trying to direct our attention to it. I watched where he was looking closely as the dust that had only just settled began to cloud again, like incense at mass approaching us solemnly.

They arrived wheel after wheel, helmet after helmet, hunched over in procession. We started cheering like before but I quickly realised it would take them a lot longer to pass.

Eventually the numbers started to dwindle—only a sorry few at the back who had clearly taken a tumble, a scrape of blood and torn lycra—and we packed our things up and left.

Driving into town to watch the end of the race at a bar, we soon realised, looking at each other, that we had started to burn red with the country sun we had uprooted our lives for. The previously stale bread, now soaked through with pear juice, fell apart in our hands as we tried to eat.

I will tell you all I have learned about Crème Fraîche: even in the summer, it is not something to drive distances for.

GL Ruffer lives in Sussex, UK. His fiction has previously been published in 3:AM magazine, Shabby Doll House and a few other now-defunct online venues.