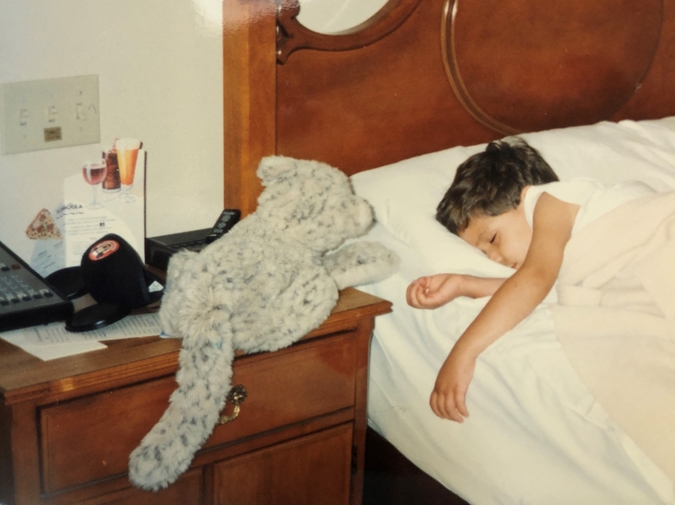 Leopard was, and still is, a marble-eyed snow leopard with whiskers stiff as wire. He’s the best comforter in my closet. Comforter as in provider of comfort, though he did spend many years sleeping beside me, tucked into the covers. Originally soft and squishy, his fur is now matted from years of intense love.

At first, I didn’t know that I’d technically adopted him from my mom—that he was originally a gift from my dad to her, not a gift to me. During our first few years together, Leopard went through the washing machine after I peed on him, many times. At five years old, I dragged him to the hospital after I tripped on a ladder wearing flip-flops. My dad leaned over, inspecting the exposed bone of my toe.

“It’s really not that bad,” he said, trying to calm everybody down. “They might just use butterfly bandages.”

But the doctor came for stitches, and fearing that needle, I clutched Leopard tight.

I slept with him through middle school, through high school, even as a captain of the varsity football team. He was my secret, and the only people who knew about him were my family, my best friend, and my girlfriend.

Come college, though, I decided it was time to move on.

I went to Clemson, where my buddies from the city bought cowboy boots and pocket knives and picked up tobacco habits. I’m not saying I escaped the trap, but I am saying none of my friends brought their stuffed animals with them to campus.

But two years later, after moving from the dorms into an off-campus house, I snuck Leopard under a stack of clothes into my room upstairs, where I kept him hidden—extra hidden if someone came over—and occasionally took him out when I needed to squeeze something familiar.

I’ve owned cowboy boots and pocket knives and did my stint with tobacco. I was raised in North Carolina where I fished ponds, peed on rocks, played football, and spent who-knows-how-many-hours playing Call of Duty on my Xbox. Guys like me aren’t supposed to show weakness. We have beards, after all. We’re certainly not supposed to write essays about stuffed animals, or do something as ridiculous as cry.

In middle school, a teacher asked the girls of the class how they felt about guys crying, and someone deemed it “unattractive,” which surprised me. But that person, of course, wasn’t the only one. I’m quite certain that as a freshman in college, if it came out that I’d slept with a stuffed animal through the end of high school, many guys would’ve shunned me as a potential friend. But regardless, I made a couple of good buddies despite the egos of college boys, and I learned over the years that I can push past toxic masculinity and into tender masculinity, which is maybe my new favorite term, so it’s not all a waste.

Leopard doesn’t sleep in my bed anymore. He’s getting old and raggedy, and he needs his rest. I’ve sent him to retire in Charlotte, where he’s now the silent protector of my old childhood room, the guardian while I’m gone, tucked into the closet where he watches over the rest of my possessions that I’m too sentimental to throw away.

I’m almost 28 now. I’m engaged. I live three hours from Charlotte. When I visit my dad for the holidays, though, I still peek into the closet to say hello. Who are we if we forget our most loyal friends?

Nicholas A. White lives on the coast of North Carolina, where he works as a civil engineer while pursuing his MFA at the University of North Carolina Wilmington. His stories and essays have appeared in Pembroke Magazine, Pithead Chapel, Necessary Fiction, Deep South Magazine, and Prime Number Magazine, among others. For more information, visit www.nicholasawhite.com.