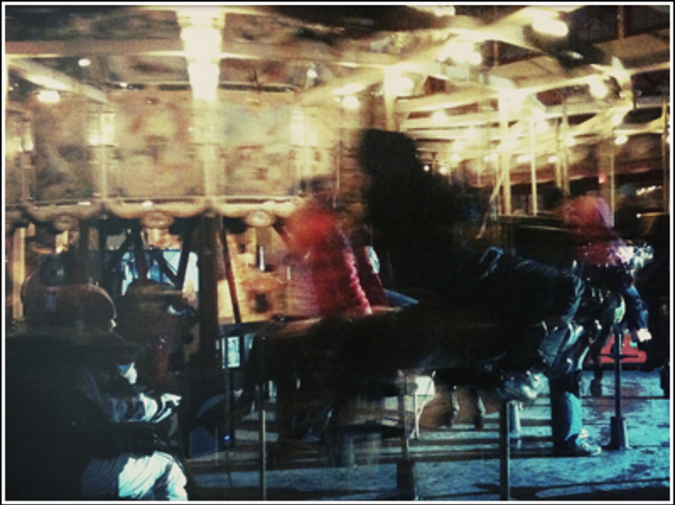 All Paige heard was her watch ticking. She peeled away the cement smell and damp that grew in the old basement where Buddy Cantrell had pitched her. You didn't grow up without running through a few of them with friends, or raiding the abandoned with spray paint and beer and cigarettes, lighting fires on the sewer drain in the floor, not to burn anything down, but to close in on light and warmth.

Buddy had stretched Paige's arms above her head, tied her wrists together and shook them there, the palest emotion compressing his voice when he asked her, ”Scared now?” Her tongue didn't work. Was that why he tossed her to the concrete like a bent arrow? She knew he did not cotton to you ignoring, and she knew he liked to spy so she froze in case he stood right outside the door. Water dripped from some higher up edge, while botched circulation tingled her limbs. Her cheek and ear rested on the meaty part of her arm where the magnified ticking embedded there hinted she couldn't have been more than eight hours hid because without winding the Timex would've died.

Before the basement there was a woodsy place beside the river where yellow star shapes cluttered the bank, huge jaundiced maple tree leaves the size of a man's hand, bigger than her baby's head. On this gold crackly blanket Buddy told her, “Sit,” then “Lie down,” and she thought maybe he'd forgot being pissed-off.

They'd made all kinds of love before but this wasn't love.

He talked to her without moving his lips. She would bear his brand, and her heart ached over it.

“Why do you want to be so cruel for?” Paige said.

She could almost read his mind twisting up a response. His body pinned hers, breath-stealing. His mouth tasted swampy and of cigarettes, then the swamp was in her hair.

“I'm stuck,” he said into her temple. The vein there throbbed. One of his hands tangled in her clothes, his thumb pressed the dimple in her throat. Buddy, a lonely soul and getting lonelier, orbit around the driest planet, no tongue.

“The afternoon's dying,” Paige said. They'd both tossed off everything.

She knew how to bring him back, but lazy begets lazy. “I don't feel like it.” In her head she rambled to where sweet things a mommy promises the innocent still mattered, where all that claimed Paige was her toddler she anointed “baby” in all types of conversation.

She imagined Cherry Starr sat cross-legged on her bed, cutting paper dolls with silly plastic scissors, watched over by Aunt Sis at the apartment. Buddy Cantrell was not family.

He once said, cocking his finger like a gun at Cherry Starr balance-walking on a curb, “I can squeeze that baby into a shoe box.” He might have Paige stuck under his sharp-as-the-world hips but he wouldn't fuck over Cherry Starr.

Steffen Tool Crib down the east side of Pike Street took on guys for brief gigs where the books showed only three employees — Marko, Stephen, and Pauly Steffen. Buddy ran with them a few weeks in August. At the same time, Paige worked across the street, next to the Coda Club at The Big Idea, somebody's notion of uptown renaissance combining coffee shop, wine bar, wall art, and an open mic. She answered the phone there and every time Buddy called, he cracked himself up in asking, “Hey, babe, what's the big idea?”

He could be sweet and funny when he wanted, when he wasn't a jack knife of emotions.

She remained loyal inside Steffen's when Marko's palm measured the small of her back. “A girl sweet as you should not be in here,” he said, eyes all darting and black. “Too many tools.”

“Buddy around?” she said. “I wanted to ask him something.”

She smelled grease of the whole shop on him, bit the inside of her mouth then said, “It's just for Buddy.”

Marko was owning Paige like she might've been his auntie. The fight started with slaps and boot tips hacking at shins and progressed until it sounded like he and Buddy were breaking bodies.

Later she insisted Marko only politely ushered, and Buddy objected, “Ushered his hands right into your pants.”

So she should have seen. Some people have a bottomless condition. He'd become the paint on her wall and she feared living drab. Her eyes might have been trained one hundred percent on Buddy if not for Cherry Starr. He'd know without Paige mentioning he rated second. Buddy would be prime or he'd be nothing.

Aunt Sis remarked: “Are you blind?”only to have Paige defend him, well aware of the circus in Buddy's brain.

“He's like fire inside the wall of the house,” Paige told Aunt Sis. “Can't be put out. Can't be zeroed in on.” That made him sexy, in her opinion.

But everyone knows heat goes right up and out the roof.

Before, with the earth stabbing her back beside the river, above Paige ranged the homeless, hopeless heaven. Sky and water comprised all. She wondered how Cherry Starr would learn to swim without her. A child living on the banks would need to know how to beat monsters living in the deep.

By Halloween, she'd be missing a week and half. Flyers would depict her too young for mothering. At the Church of the Apostolic Wood a band would play a benefit while the curious tossed through a denim rummage pile. Among themselves they'd claim: Where is that girl, who has her, what they'd do to her?

Paige could conjure their gossip, which she had no issue with. Whether she lived or died, there would always be talk; she only fretted for her baby's reputation. Nothing worse than walking the school halls with whispers of “that's the girl,” skating your shoulders. Her own mama got displayed across the news shows and it splashed Paige so she knew how similar things might scald Cherry Starr. Aunt Sis would scoop up and sing Paige's baby to sleep with My True Companion, the way she'd done to Paige when she herself had been the baby, the loved one, doted on. She wished, just a teense, at this sour edge, to be young again. Not erasing Cherry Starr, no, she loved her baby with every bit of string holding her together.

Under maples, and surrounded by the river industry clang-banging miles off and conducted near-sounding via water, Buddy had said to her, “You have no place here.” He'd touched his chest, meaning, of course, his heart, which he kept vacant.

“So we just quit?” She asked, “No longer your faithful dog?”

She shouldn't have said that.

“I ain't got blood on my hands over us,” he said. His grasp on her ribs then, sheesh. She felt a window closing, shutting off the wind even though she was still pretty sure he was letting her go.

“Loco,” he said, talking about her as if she wasn't under his weight, as if she was already lost and he was juking up his alibi.

When she'd be cold, when she'd be stone, Cherry Starr's warm body'd be wiggling with anticipation over a Halloween costume, a coat pocket full of acorns, a Charlie Brown show on the television.

Wonderment rocketed through her: “I don't know why...Maybe he thinks...I can't figure...” Every tangent fizzled; she wanted to give him his best excuse but ideas broke down into light, food, air.

The five o'clock whistled in the far off. Or was it the four o'clock, or six? She couldn't see her watch as it ticked past meals. Her belly devoured itself with its persistent juices; she'd also pissed her blue jeans. Buddy'd stole her phone. He'd not returned, no matter how patient she'd promised him she'd be.

Why are you doing this? she wanted to scream, but her jaw no longer set right. She'd given herself to him bite by bite and had maybe encouraged him on his path. She had never told him no.

“Something of your mama in you,” Aunt Sis had said, “and you know where her second-chancing drove her.”

Paige saw Buddy's teeth gleam near the coal bin. He'd returned, or she was dreaming. In a neighborhood over-run with cats, she was one mouse, she was his squeak in a dank hole, or the issue from an un-oiled door.

He objected that even her moaning got to him. He said, “You make it all mean too much.”

He smelled like everything wrong with a city, approaching. Her mind wanted, but could not squeeze, these words to her twig-dry mouth: You mean nothing, nada, zilch. She longed to bash into him that him and her had no zip code, that she'd soon ghost this space and then what would he do, what would he have? Paige could tell him: he'd have less. Her muscles twitched inside their sheathes.

“Nobody move,” Buddy said, and no one did.

Donna D. Vitucci works as a development associate, raising funds for local non-profits. Her fiction and poems have appeared in dozens of literary magazines and journals including: Hawaii Review, Front Porch Journal, Another Chicago Magazine, Night Train, Storyglossia, Corium, and Meridian. Her novel manuscript, FEED MATERIALS, was judged a finalist for the Bellwether Prize, 2010. “My True Companion” is one of several stories through which Donna has been working out the too common disturbing disappearance of girls.

Donna D. Vitucci works as a development associate, raising funds for local non-profits. Her fiction and poems have appeared in dozens of literary magazines and journals including: Hawaii Review, Front Porch Journal, Another Chicago Magazine, Night Train, Storyglossia, Corium, and Meridian. Her novel manuscript, FEED MATERIALS, was judged a finalist for the Bellwether Prize, 2010. “My True Companion” is one of several stories through which Donna has been working out the too common disturbing disappearance of girls.