My Chinese Mother Snagged My Husband of 40 Years 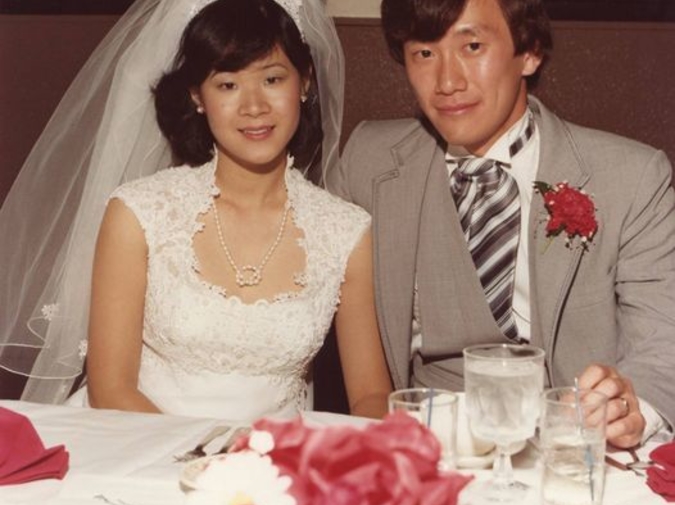 “What are your intentions?” My mother asked the handsome Chinese-American man when he brought me home after our fourth date.

I dropped my head in shame as my date did his best to answer this question he surely had no answer for.

My mother had been on a rampage to find me a husband since I started college. On her first visit to my campus, she immediately took me shopping. After years of neglecting how I looked, she decided that my baggy jeans and loose-fitting tops weren’t going to attract anyone. With my freshman year over and nary a date to my name, she was more determined than ever to get me hitched. In her mind, her 20-year-old daughter needed to marry soon. She had married at 21.

A month before my mother posed that humiliating question to my shocked date, I had casually mentioned to her I had heard that a new Chinese boy had moved to the area. The 25-year-old “boy,” whose maternal family hailed from Fuzhou, the same Chinese province as my adoptive parents, was going to attend an outdoor classical music concert that Saturday.

Mom’s fingers punched numbers on her princess phone faster than any speed dial as she called friends to get the lowdown on this eligible young bachelor. As it turned out, members of my parents’ social circle were planning to go to the same concert. Even though our family had only been to a handful of live performances over the years, Mom made it clear we would not miss this one. She carefully chose my outfit and instructed me on how to behave. When we reached the Meadow Brook Amphitheatre in Rochester Hills, Mich. we quickly spotted the black-haired people in the crowd. There weren’t a lot of Chinese Americans in the Detroit area in 1979.

A friend told my mother that the boy was in the cafeteria. We walked in that direction, Mom leading the way. He was sitting by himself, devouring grilled chicken. When he spoke Mandarin, Mom beamed. We talked for a while, and then he and I ended up on a shared blanket, listening to Beethoven’s Fourth. Mom and Dad sat on a blanket a few watchful feet behind.

“I’m going to the Organization for Chinese American picnic tomorrow,” the young man said. “We never go,” I replied. But my mother was far less indifferent. She dragged my father and me to the picnic the next day as if we had been going to picnics all our lives.

The young man was of medium build, with a thick crop of dark brown hair. He had large eyes and a pleasant demeanor. I thought he was cute. My mother pointed out that his wide forehead was a sign of good luck. After that concert and picnic, we started to date. I felt a connection because we both straddled our traditional Chinese culture with the westernized world we lived in. He had emigrated from Taiwan at age 12 and was fairly “Americanized” in his thinking. However, he followed and valued Chinese traditions like filial duty and respect for elders, just as I did.

Six weeks later, my mother suggested that the young man and I invite his boss and his wife for dim sum in Windsor, Canada, just across the Detroit River. My mother had bought me a white dress (not wise for dim sum dipped in soy sauce) with a mandarin collar to wear.

“Dim sum means little dishes,” I explained to the white couple sitting across from us.

“This ha goa is made from rice flour and shrimp,” I explained as I placed pieces of the savory delights on our guests’ plates with my chopsticks. I had expertly picked the perfect combination of sweet, savory, heavy, light, as my mother had taught me.

Another time, my now official boyfriend fell sick. Mom cooked a large pot of Chinese chicken noodle soup and directed me to drive it to his apartment and say that I cooked it. I dutifully complied. As I drove on the highway towards his apartment, a tire blew. There were no cell phones then. I nervously walked up a ramp and knocked on the door at the first house I came to. The woman kindly let me use her phone. When my beau arrived, I thought I would hear “You’re so careless. You need to maintain your car,” words my father would have said. Instead, he silently fixed the tire and said, “I’m glad you’re safe.

Five months later, Mom invited him to a family Christmas trip to Toronto to see extended relatives. An aunt, who had four daughters of her own, declared him “a great catch.” My mother smiled, but to her, the deal wasn’t sealed. She was determined for him to put a ring on it.

That New Year’s Eve, on my family home’s landing, my boyfriend kissed me and said, “I love you.” Surprised, but pleased, I replied, “I love you too.”

A few months later, we were eating dinner with my mother. Dad was conveniently out of town on business. We dined on fragrant chicken infused with red wine, a Fuzhou specialty of our families’ native province at my family’s linoleum oval table.

“You have to get engaged because everyone knows you’re a couple. It will be hard for Yvonne to date any other Chinese now,” Mom pronounced. We were both shocked, but as children of Chinese immigrants who had sacrificed so much, we weren’t in the habit of confronting our elders. We thought this idea would pass and we would have time to process the thought of getting engaged. But no, before he had a chance to get down on one knee and before I could give a response, my mother dragged us to a neighborhood jewelry store a week later. After looking at a dozen engagement rings, Mom whipped out a credit card to pay for the one I liked. “Don’t worry, you can pay me back $100 a month,” she reassured my newly minted finance. I was excited, though I had some apprehension. Did we just get bulldozed?

To my mother, we were close to the finish line. However, she was never one to leave things to chance. She threw an engagement party for all our Chinese-American friends. Everyone was put on notice: this man was off the market!

Mom’s only daughter was poised to marry a polite, respectful Chinese-American with a promising career. Finally, she was going to beat those women, the ones with larger homes and who married physicians or executives; those with imperial jade jewelry, the lustrous emerald-green kind. I felt like my newly betrothed and I were pawns in Mom’s game of chess. Through sheer willpower, tenacity, and an often disagreeable demeanor, Mom usually got her way. She simply wore others down.

In my large white wedding album, my mother is adjusting my veil in the bridal room. After that photo was taken, she admonished, “Remember, don’t smile when you walk down the aisle. We don’t want people to think you’re happy to leave our home. A few tears would be nice so that people know you’re sad to leave our family.”

In traditional Chinese families, when a woman marries, she literally becomes part of the man’s family. Long ago, if a groom died, the bride became a servant in the husband’s family household, forever at the mercy of an often domineering mother-in-law.

The kind, calm man my mother snagged for me and I married on a muggy summer day in a stone church near the Detroit River. After the minister pronounced us man and wife, we pivoted. I finally smiled, and we walked down the aisle.

At the wedding reception, my husband’s neighbor, the one who had told him about that concert, toasted us and said, “They are each other’s zhen ai, which means true love in Chinese.” She declared she was responsible for the auspicious nuptials—but the groom and I knew better.

The morning after our wedding night, my husband and I drove to my family’s home. Chinese American newlyweds traditionally brunch with relatives and friends the day after their wedding before they leave for their honeymoon. I slowly turned the key in my family’s front door. Even above the din of Mandarin, Fuzhou and English, my mother heard us and rushed to the landing.

“How did it go last night?” she bellowed, as everyone looked on.

I didn’t answer her then, but it seems everything went okay since my husband and I now have three young adult kids. On July 25, we celebrated our 40th wedding anniversary. While my mother made sure the knot was tied, my husband and I have done the hard work of building a strong relationship. Our two daughters are on Hinge. I made a conscious decision to let them date at their own pace.

Yvonne Liu is a writer based in Los Angeles, California. She is currently writing a memoir and her work has appeared in the New York Times, Easy Reader and elsewhere. Follow her on Instagram and Twitter @yvonneliuwriter. More of her writing can be found at yvonneliuwriter.com.