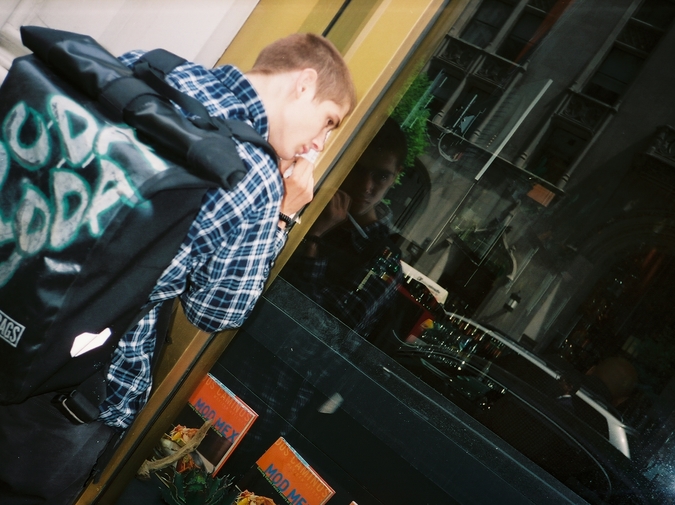 The thing to do in those days was to take a road bike from the 70s or 80s and swap the parts out. I had an old Fuji, and so did everyone else. But you should've seen the colors: burgundy frame with gold details, metallic gold wrap on the handlebars. I got rid of the derailleurs and brakes and wheelset – entry level stuff, SunTour probably – and put in some equally entry level track parts. Some big 27-inch wheels and dopey gumwall tires that sold for $25 each. A thick eighth-inch track chain hanging clumsily off the narrow teeth of the front cog, a gear ratio far too high for city riding. I was much too young to care.

On my first day of work I put my Fuji conversion in the undercarriage of a bus from the suburbs and called into base after stepping out into traffic at the Port Authority. I remember cranking those gears up the hill at St. James Place and Chatham Square on the way back uptown and developing an ache in my knee that took a few months to go away, and would still develop sometimes when I was sitting for too long on a bus or in a movie theater. I remember finishing my shift on a long haul up Sixth Avenue to the park, admiring the uniformity of the skyscrapers lining the street, which towered above with a quietly imposing hush, sort of like a forest of redwoods – an image I have shamelessly stolen from a bike messenger friend I made about eight years after I had worked my first day.

The cheap wheels developed a wobble and hop to them that no mechanic was able to fix. Once, on my way down Seventh Avenue, an over-inflated tube blew out the sidewall of my rear tire, ending my day. I made a $3.50 flat rate for every envelope and I could do about 25 a day when it was busy. Of course it wasn't always busy. When it was, there were no lunch breaks to speak of. I didn't know that they didn't even make decent tires for 27-inch wheels. I didn't know that on slow days I was being paid below minimum wage. I didn't know if that was illegal or not, and still don't. I didn't know anything, and still don't.

"How does it know?" my friend said to me. It was a good question.

A pair of girls, also rather attractive – or so it seemed to me, back when I was twenty – approached from the opposite direction. "He looks so happy," I heard one of them say. And they were right. I did; I was.

Of course things didn't work out. But I was too young to know that they wouldn't. Even if I'd known (and maybe I did) I doubt I would have cared.

Messenger bikes usually meet more dramatic ends: buckled on impact, run over by trucks, stolen from drunk messengers when they pass out on the train. I was doing nothing downtown, just standing by, riding in circles, practicing my skidding technique, when I felt the frame crack under the strain. Turning it over, I saw that the crack was inoperable: right at the bottom bracket, where the down tube and seat tube come together, so pronounced that I could feel the bike flex under me as I pedaled slowly up the Brooklyn Bridge. Halfway to the top the whole thing came apart beneath me, setting me gently upon my feet. I was happy, at least, that it had happened on the way up instead of on the way down.

I don't remember what happened to the corpse of the bike. Most likely I did the dumbest possible thing: carried it all the way back to my apartment so I could salvage it for parts, walking miles with it draped over my shoulders like a lost sheep. I used to have a picture that I took with my friend's digital camera after he helped me put it together back in 2007, but that was a couple hard drives ago. I was too young to know I might want to look at it again someday.

Nicholas Clemente is a writer living in New York City. His fiction has appeared in Glimmer Train and Newtown Literary, and he is currently at work on a novel-in-stories about bicycle messengers.