My First NIN: The Downward Spiral 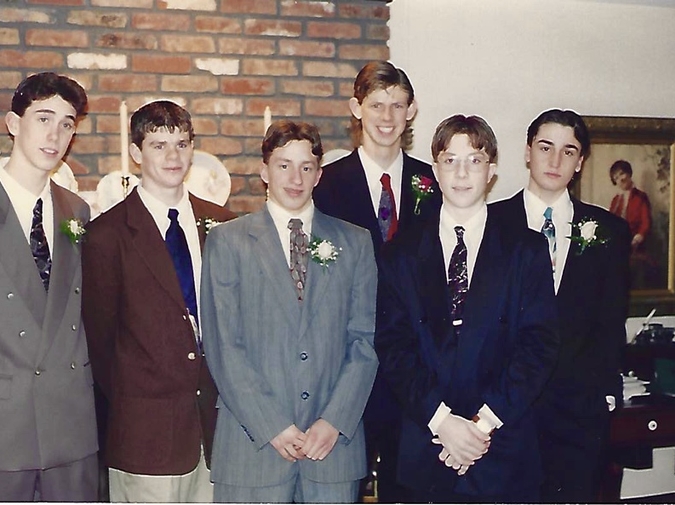 I was a freshman in high school the first time I heard Nine Inch Nails. In the spring of 1994, my neighbor Ryan, a senior, took me under his wing and treated me like the little brother he never had. He waited until I got into the front seat of his mom’s Celica to push The Downward Spiral into the cassette player then cranked it up all the way to Rita’s Water Ice, windows down, sunroof open. In the first few seconds, I realized this was no Blind Melon, no Soul Asylum, no 10,000 Maniacs. Nine Inch Nails made Nirvana and Stone Temple Pilots sound like Collective Soul. “March of the Pigs” pounded from the speakers, the synthesized drums and electronic bass vibrating through the seats as he jerked the wheel to the screaming lyrics. So much anger, intense anger. At the red light, he fast-forwarded to “Closer” so that everyone within ten car lengths could hear the chorus.

The first time I got drunk was a few months before that, not counting the time at the shore when I was eight and had mistaken California Wine Cooler for ginger ale. Ryan and I sat on the couch in his family room and did a shot a minute for five minutes. Then one every ten minutes for the next half hour. Rumple Minze, Sambuca, Hot Damn!, the stuff his dad never drank. I don’t remember much that night. Not walking through the snow to my friend Keith’s house yelling “Hot Damn!” Or trying to climb a huge snowbank and falling before I could reach the top. After the last failed attempt, I lay at the bottom for several minutes while they dumped snow down my jacket. I was passed out in Ryan’s bedroom before my friends continued the party without me, before their one a.m. trek to Perkins, before his parents came home, before his dad knocked on the window beside their booth and told them to get in the car.

I remember the next morning, puking, shaking violently, asking for God’s mercy. There was too much light coming through the blinds. I was a living, breathing version of “Hurt.” That unfamiliar sting of my first hangover lasted until late afternoon. I didn’t even sniff alcohol for another four years. When I lost my grandfather, lost my friends, lost my soccer career to a knee injury, lost my soul, The Downward Spiral was stuck in my Discman.

Reznor was a poor student, drawn toward computers and its emerging connections to music. “It wasn’t cool to play music where I was from,” he said. “You had to be an athlete, or else an athlete, a f-ing turd in a football uniform.” He dropped out of college after one year, moved to Cleveland, worked at a record store and a recording studio, scrubbed toilets to earn enough money for bits of studio time that eventually became Pretty Hate Machine.

Reznor maintains his sketchy, dark, and internally twisted persona. An image that has garnered millions in record sales, sold-out tours, award nominations, and criticism. He’s an anti-hero, a recovering addict who loves to curse, call out his contemporaries. He’s not afraid to push the boundaries for art.

I play the local hits station for my nine-year-old daughter in the car. She likes Ariana Grande, Ellie Goulding, Halsey. Even Miley Cyrus. I cringe whenever I hear the drug and sex references that she’s still too young to understand. Then switch over to the alternative station where they’re more obscure.

“Who’s your favorite band?” she asks.

I run through my glory years when music helped me understand the world. Or made it more complicated. The usual bands come to mind: Green Day, Rage, Pearl Jam, Nirvana, STP, Alice in Chains. Somewhere in that mix lies Nine Inch Nails. Although admitting to this now almost feels like a phone call away to Child Protective Services.

“Dave Mathews Band,” I say. Not a terrible lie. But safe.

At what age will she be when I need to explain my musical tastes? Even Trent Reznor has trouble sharing his music with his four kids, the oldest nearly the same age as my daughter, on the verge of becoming a teenager.

Will she call them old and outdated the way I did with my parents’ favorites: The Who, The Beach Boys, The Beatles, The Moody Blues. I like them. I understand their greatness now. They just weren’t my generation. Just weren’t me.

Should I even tell her that “Old Town Road” used a sample from NIN’s “34 Ghosts IV” before the version with Hanna Montana’s dad? Or that Reznor was one of the creative voices behind Apple Music? That he’s won an Academy Award?

At some point in her life she’s going to see the “Closer” video and ask what is wrong with me. I don’t know if I’ll have an answer. Still freaks me out, too. It’s hard to erase the images of anti-Christianity and human bondage, filmed like an eerie 1920s sci-fi snuff film. It’ll certainly generate a talk about creative freedom, self-expression, audience interpretation, that sort of thing.

Then I realize her true musical influences haven’t even been discovered yet. Her generation’s version of Trent Reznor is playing Garage Band in his—or maybe even more likely, her—basement.

Greg Oldfield is a physical education teacher who lives in the Philadelphia area with his wife and daughter. His stories can be found in Barrelhouse, Porcupine Literary, and Maudlin House, among others. He writes about soccer for the Florida Cup and can be found on Twitter at @GregOldfield21.