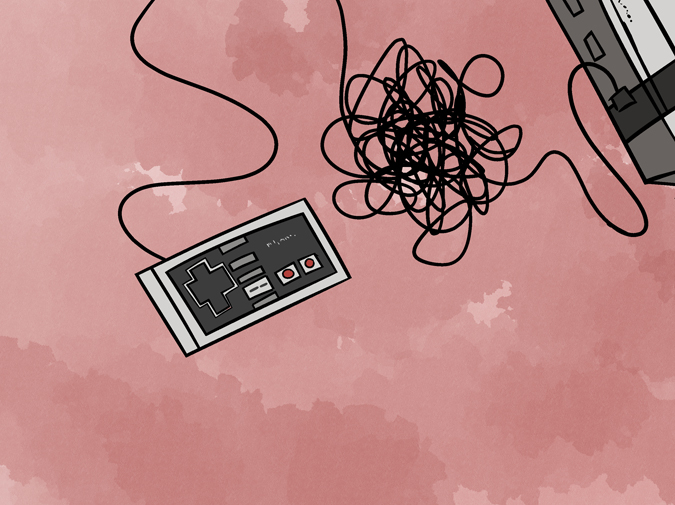 My wife and kids and I are driving around in New Orleans, not too far from where I spent the first years of my life and then the occasional week during the summer when I stayed with my grandmother when I was a kid, and I’m telling them how I believe one of the most important things we have is our memory, the images and associations from our childhoods, and how driving through this city today sends my own memories hurtling back at me like buckshot.

But everything here seems so different now: the still-abandoned houses, pocked with graffiti and boarded up with sheets of dark and moldy plywood. Windows smashed and broken, roofs caved in, a frayed blue tarp gently flapping in the warm breeze. Then there are the weeded lots where a house once was, the hood or trunk of a forgotten car emerging like a hand from a rising river. Save me, it seems to say.

Almost fourteen years since the waters came through and still so much wreckage. It makes for a strange connection to your past. To see what was once so familiar now lost.

But I can still remember those far-off summers in New Orleans. It was 1988 and I had just gotten my first game console, a Nintendo Entertainment System. It came with one gray cartridge that had both Super Mario Bros. and Duck Hunt on it, two small rectangular controllers with red and black buttons that fit perfectly in my eight-year-old hand, and a Zapper gun so you could shoot skeet and kill a passel of ducks if you wanted to. If you missed, a little brown dog would come out of the weeds and snicker at you.

I had a small TV that I hooked my NES up to and would sit on the floor for hours playing games like The Legend of Zelda, Castlevania, Double Dragon, Excitebike, Mike Tyson’s Punch-Out!!, and Ikari Warriors.

I shut out the world back then. It was like pulling a thick dark curtain over all that was going on outside that little magical 8-bit universe. And, believe me, there was a lot going on, a lot for me to shut out. These are the things that are hard to talk about with my kids, who themselves are only thirteen and ten.

I remember the social worker who came to check on me once. We were living in a rented single-wide trailer in Folsom, about two hours north of New Orleans.

The social worker’s name was Mrs. Snow. As I sat in my older sister’s room playing a Nintendo game I had rented called Faxanadu, Mrs. Snow talked to my parents in the den.

“Does David seem to be adjusting?” she said. “Does he have any friends, does he make good grades in school?”

In the game I was playing, your character was some sort of wizard-looking guy and you had to walk through a medieval village, talking to shopkeepers and other tradesmen so that you could build up your inventory to save the townspeople, and their village.

Then I heard Mrs. Snow ask my parents, “Would it be all right if I talked to him?”

“Sure,” my dad said. Then they called me out to where they were sitting. I paused the game and put down my controller.

“Hi, David,” Mrs. Snow was saying to me as I walked into the room. She stood up from where she had been sitting next to my parents on the sofa and shook my hand. She was wearing a bright red pantsuit and had hair that was so blonde it looked almost white in that thick shaft of light that slanted in through the curtainless window and that looked out into a large field bordered by a wall of woods. “My name’s Mrs. Snow.”

“Hi,” I said. I searched the tiny room for something to focus on so I didn’t have to make eye contact with this woman whom I had never met, whose purpose for being there I didn’t quite understand. After all, I was only eight years old.

What I did understand, though, was that the parents sitting on the sofa watching my interaction with Mrs. Snow weren’t my biological parents; they were an aunt and uncle who had adopted me after my mother was deemed unfit to raise a child.

I didn’t say anything. My parents just watched us from their spot on the sofa.

“Well, I won’t keep you any longer,” Mrs. Snow told me. “I know you’ve probably got plenty of things you’d rather be doing than talking to me. It was nice meeting you, David.”

“You too,” I said. Then I went back to my sister’s room and un-paused my game.

As I got older and my adoption was finalized, my dad fell deeper and deeper into alcoholism, eventually losing his job so that I had to drop out of school and work full time to help support my family. I had mostly lost interest in Nintendo by then and had moved from that console to a Sega Genesis and then finally to a Playstation. I would play games like Tomb Raider and Grand Theft Auto until two or three in the morning those days, all after working night shifts as a phone operator and then on a production line in a flag printing factory. Those were difficult times but at least I had something that helped get me through them. Always a place I could go to escape.

These are the stories I tell my children as we drive through this semi-ruined city, the place where I once lived and played. Even though it is nothing like it used to be. But then again, I tell them, what ever really is?

David Armand was born and raised in Louisiana. He has worked as a drywall hanger, a draftsman, and as a press operator in a flag printing factory. He is currently Writer-in-Residence at Southeastern Louisiana University, where he also serves as associate editor for Louisiana Literature Press. In 2010, he won the George Garrett Fiction Prize for his first novel, The Pugilist's Wife, and has since published two more novels, two poetry chapbooks, and a memoir. David has recently finished his fourth novel and is currently working on a collection of essays.