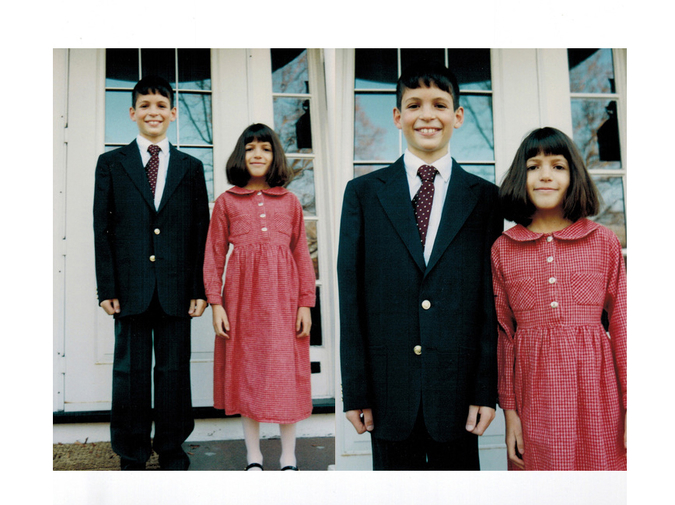 I asked for, and got, a stereo for my bedroom and Avril Lavigne’s Let Go on the same Christmas. It was the first CD I’d picked out. The stereo was silver-gray, and all the buttons and speaker housings and cassette holders bubbled out, in that pre-domination-of-Apple era when electronics were unashamedly bulbous. I cleared part of a bottom shelf on my bookcase, and my dad and brother helped me install it.

I pushed the CD button and a 6-CD tray burst out, but I only wanted Avril. I chose “Complicated.” (I still remember without looking: track two). A few choruses in, my dad talk-sang gently, “driving in your car.” It’s the first time I remember feeling that superstrong tween indignation that he’d taken something that was supposed to be just mine.

The stereo had a digital display with bright-green flashing text, listing its multifunctionalities: TAPES RADIO CDS on and on. At night, the light blared through my eyelids. I couldn’t turn the other way, because the stereo was next to my bedroom door. I always slept facing the door, not for the (somewhat) practical reason that I’d see any intruders coming, but because child me had somehow formed the fear conviction that witches would come take me away in my sleep if I faced the wall.

I slept, eventually, at home with my Avril-machine. It’s ironic to get such a proudly multifunctional stereo for only one simple task—but that was true of the CD itself, too. I just wanted some beginner-level independence, but I got something headier and more concentrated, like someone new to drinking buying Everclear. Avril sang, “Is it enough to live? Is it enough to breathe? Somebody rip my heart out, and leave me here to bleed.” I’d have been happier with something milder: less punk-and-piercings, more of an “I rebel by making cookies from scratch” aesthetic. But I didn’t know that a spectrum existed. I was determined to acquire a taste for Avril, so I did.

One of the songs ends with a recording of a police siren, and that’s how I learned that songs could have endings—all of my parents’ music just faded out on the chorus, quieter and quieter iterations of it.

I was still trying to figure out what kind of teen I would be, so the Avril/stereo combo was more a hopeful experiment than the following of some actually organic impulse. I’d seen Disney Channel show characters sing along to music in their bedroom, so I tried that with Let Go. It didn’t go so great: I tried to mimic Avril’s tone quietly, so no one would hear me. You can’t quietly mimic belting. I kept trying anyway.

That experience alone would’ve been vivid enough to give me permanent Avril nostalgia—and then, we went on a family RV vacation. I knew RVs were like little mobile houses, and I fantasized about hanging out in ours: I’d read, cook, putter around. The concept of a miniature house—so small it fit in a van!—charmed me so much that I didn’t think at all about logistics, like the facts that, when an RV is moving, being in it is more like sitting in the backseat of a van than hanging out in a miniature house, and, when your wake-up-at-five dad rents an RV, he wants to put a lot of miles on it. We drove a lot. I had brought lots of books, but I can’t read in cars without getting carsick.

On family road trips, we usually talked and listened to music and played word games, but in the RV, our parents sat up front, my brother and I way in back. My brother mostly listened to CDs, so I did, too. I’d brought my first portable CD player, and those headphones with the band that wraps behind your head. I had a little binder-style CD case, with sleeves for all my CDs, almost all empty. I had: Josh Bell’s “Romance of the Violin” (classical, gifted by grandparents, before I quit violin), Jimmy Cliff’s “The Harder They Come” (Rasta, gifted by my father), and Avril. (And some PC games, which I put in the CD player once out of desperation, but The Sims and Oregon Trail did not yield their theme songs).

It was a good day when I learned how my CD player’s Shuffle button worked. I’d hear and feel the whirring as it searched out the next song. The song number appeared on the little screen, and I knew instantly which song it was and exactly how it would start.

The true anthems of the album, Complicated and Sk8r Boi, have become punch lines for 90s babies. These days they function less as songs, more as time capsules. One song from the album, though, is getting some earnest play. On a run the other day, I listened to a podcast that starts with one of the hosts singing and the other guessing the song. He sang I’m With You, a plaintive and weirdly moving ballad that, unlike the rest of Avril, people aren’t embarrassed to publicly admit to liking. A friend of a friend picked it for her karaoke song last week, and she belted high notes that I don’t think I’ve ever even tried to hit.

I love those songs—still do—but not in a this makes me feel seen way. I love them because I, without intending to, basically went to a desert island and brought only one CD. The songs have ceased to be songs for me anymore, like how when you repeat a word over and over it loses its meaning, stops sounding like a word at all.

It feels strange for the songs on Let Go to have been important to other people. In my head, that CD is not like other things I loved that I knew other kids loved, like Tamogatchis and the Boxcar Children books. With those, even though I enjoyed them privately, I knew other kids had parallel experiences. But people loving Avril songs almost 20 years after they came out feels like if other people my age started referencing my stuffed animals by name. I think of that as a part of my childhood that was a fully personal—which is to say, isolated—experience. Hearing the opening notes of any of the deeper cuts from that CD feels like recognizing lines from my diary. I blush.

Let Go is still in the mostly-empty spinning CD exchanger in my stereo. I’m not sure why they built the display so obnoxious. Maybe they built it more for the sell than for the post-purchase having, more for what it promised than for what it actually was. The screen still blinks its incessant ads into my childhood bedroom, blaring 24/7 to an empty room—but those neon lights were never really for me.

Sarah Ruth Bates is a writer based in Tucson, Arizona. Her work has appeared or is forthcoming in the Boston Globe Magazine, Outside, Off Assignment, WBUR Cognoscenti, and Appalachia Journal. She’s a first-year MFA candidate in nonfiction at the University of Arizona, where she teaches composition and edits the Sonora Review. Catch her at @sarahrbates and sarahruthbates.com.