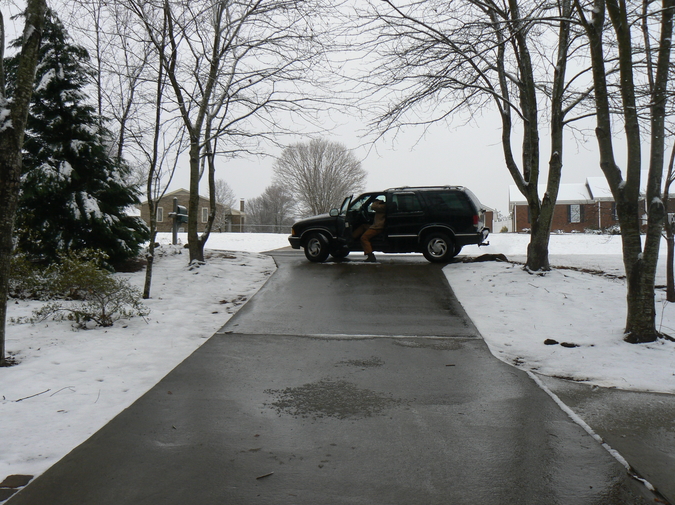 I still remember the first day I drove the Blazer legally. First, I drove it illegally to the DMV. I took and passed the permit test, and then, driving home, the first time I’d ever taken to the road with the state’s approval, with my dad beside me and my younger brother in the back seat, I hit a dog. This was on a residential street, where dogs are supposed to be. The dog ran alongside me for about twenty yards, then I hit it. Or maybe it hit me. I still don’t know. I felt sick. To my amazement, both my dad and my brother responded by laughing. I guess they were laughing at me. Could this be what actually happened? My brother raised his hands before him like lifeless paws in order to show me what the dog looked like, and they laughed. Or maybe the dog was alright, and that’s why they were laughing. It’s possible. I didn’t stop the car to check on the dog, as I should have; I just kept going.

The black, four-door ‘97 Chevy Blazer had appeared in my driveway a few weeks before the permit test. My dad procured it from somewhere and somebody, but amazingly those are details I never even thought to ask about. The ignition and the doors required different keys, so he broke the key off in the ignition, to keep me from carrying two keys around. My mom thought it was a ridiculous to break a key off like that — she worried someone could steal it too easily. I think it was unlikely somebody would try to steal such a car. Really, she probably just felt it was low class, like many of my dad’s solutions to our problems. For example, earlier he had taped up one window in our confusingly named ’98 Oldsmobile 88 to keep it from falling inside the door whenever we crossed train tracks.

In the trunk, the Blazer featured a grey, unanchored, beat-up-looking aftermarket sound system panel — two remarkably small subwoofers and a couple tweeters — hooked up to an aftermarket CD player. None of these components were brand-name or especially valuable, but to me the sound was glorious. The weird panel of trunk speakers may have already been in the car when my dad bought it, but we went shopping for the CD player together, and now I’m touched by the thought of it — all the time my dad spent making sure I had the CD player which played such an important role in my daily teenage life. All so I could listen to Turn on the Bright Lights by Interpol, my most treasured CD, at dangerously high volumes, feeling important and doomed simultaneously, as all teenagers must feel at all times but especially when in alone in their cars.

We bought a CD player forty-five minutes away, near my dad’s hometown of Honea Path, where a high school friend of his had opened a stereo shop in a small, squat concrete building. My dad’s friend had a buzz cut, same as my dad, and behind the counter his elementary school-aged son played Mario Sunshine. He cut us a deal on a lightly-used (recently stolen?) CD player. A few days later, the CD player broke, so we had to buy a different one at Best Buy, which is the one that’s still in it, presumably, powering those no-brand speakers.

Years passed and I moved on to a 2002 Honda Accord, which I never stopped driving until three months ago, when the wheel bearing somehow bent and something else happened to the engine simultaneously, all probably due to the Chicago winter, the result being I sold it to my mechanic for three hundred dollars. But way before that, when the Accord still ran beautifully, my other brother drove the Blazer to Minneapolis, where he attended college for two years, against the wishes of my parents. He was being uncharacteristically stubborn, demonstrating his free will, and I was proud of him. None of us expected the rapidly aging Blazer to make it through those Minneapolis winters. Yet somehow it did. It returned to us. We had to find a different way to get rid of it. Eventually, my dad’s friend, a mechanic and a much closer acquaintance than the sound-system guy, bought it for nearly nothing and added a roll cage so he could drive it in a local demolition derby.

I thought that would be the end of this piece, but I texted my dad to confirm the demolition derby bit, and he responded with good news. The Blazer hasn’t died. Even after an illustrious derby career, it still functions, in a way. If you pour in several quarts of oil, it’ll give you at least thirty minutes. The mechanic’s two sons actually do this on occasion, gunning the Blazer up and down the huge open space behind their house. They’re eight and eleven — old enough to just barely reach the pedals. I think of them and feel somewhat absolved of hitting that dog. It was the car itself that craved collision. Perhaps that’s what keeps it from dying, the prospect of hitting things: dogs, derby cars, all the helpless objects in the mechanic’s backyard. The boys drive through mud pits and over brush piles until the Blazer runs out of oil. Then they hook it to their tractor, tow it back to the shed, pour in a couple quarts of oil, and do it all over again, behaving like teenagers, basically, with the speakers turned up loud.

Parker Young lives in Chicago. His fiction has appeared in Miracle Monocle and Oyez Review.