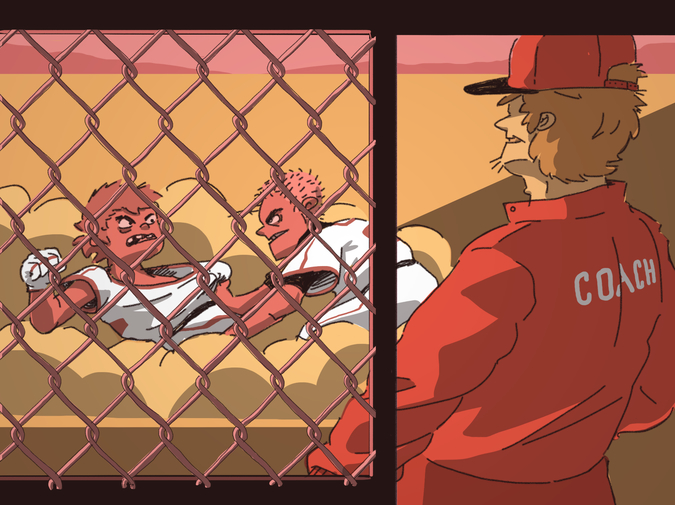 Yogi and Thurman gasped and groaned as they rolled in the dust between home plate and the dugout. Some of the guys laughed at first, but I knew this was more than a schoolyard scuffle. More than some bruised egos. Yogi and Thurman were wrestling over their very birthright.

As the blows against each other’s ribs and the glancing strikes on their now helmetless heads escalated, I moved to get out of the dugout and pull them apart, but their father, Coach Christen, blocked the exit with a Louisville Slugger.

“They gotta settle this for themselves. Remember,” he said, turning away from his brawling progeny, “You show who you are when you’re out on the field.”

This seemed a little generous to me, as they were veering way outside the baseline towards the chain-link fence. We were playing a scrimmage against our crosstown rivals, Southaven High, with the coaches calling the game. Coach Whiting looked on at the brawl almost with disinterest, not stepping in to interfere with how Coach Christen coached his players, with how he raised his sons.

Coach Christen caught all four years at the University of Mississippi and then played catcher for the Memphis Redbirds for six, with multiple brief stints in St. Louis. He never stayed on the Cardinals roster, but he’s got the most bona fide resume of any high school coach in the state of Mississippi. Whenever asked why he didn’t coach college or better he always said, there would be time. There would be time, but he wanted to coach his boys.

Perhaps it’s no surprise that the greatest Mississippi catcher of his era should produce two of the hottest college catching prospects in the country, but it didn’t make for a placid team environment. All offseason and all during our winter training the team began to realize that Christen would be picking between his sons for starting catcher, and that it wasn’t a simple matter of seniority.

The Clash of the Christens began as a joke when Yogi made the team in the eighth grade, but in his sophomore year, when Thurman was a senior, the local newspaper made it a headline, and everything stopped being so funny. They both hit above .450. Thurman threw faster and a little farther, but Yogi was already bigger than him at sixteen. And Yogi was smarter. He was a student of the game. He didn’t fuck up.

“That’s how you know he’s desperate,” said our shortstop Kenny Kenderson. “He’s slipping into dishonorable methods.” Not only did Kenny Kenderson have the official MLB rules memorized, he also had the Mississippi High School Activities Association Baseball Rulebook committed to memory. Once, on a long bus ride back from Oktibbeha County, he’d rhapsodized at length about the morality and wisdom in stealing bases. He found aluminum bats unfair, though Coach Christen required him to use one.

“Jesus Christ,” I said. “They’re gonna give each other concussions.”

I was wrong, though. Yogi found some leverage. He pinned Thurman for a moment and then wrangled him into a choke hold. Thurman stopped struggling as Yogi’s bicep bulged around his neck. Coach Christen finally left the dugout.

“Alright,” Christen said, his stocky arms prying Yogi and Thurman apart. “I said alright!” Yogi jumped up on his feet, but Thurman was unconscious. After a few moments he jerked to. He trudged into the dugout and sat way down at the end of the bench. Yogi trotted behind the plate. Coach Whiting gave a long look at Coach Christen before shouting out, “Play ball!”

And so it was—Yogi became the starting catcher. We’d all been waiting for an official announcement, perhaps in the locker room, perhaps on a knee at the end of practice, but none ever came. I never found out what started the fight that day. Coach Christen often switched them out, especially in scrimmages. He’d pulled Thurman and as they passed each other the fight erupted. Some of the guys said Thurman said something to Yogi to start it, others said Yogi instigated the brawl.

My father had been watching that day and he didn’t think either one of them started it.

“It’s a strange sort of cowardice,” he said. “To coach that way.” It was my father’s opinion that things had just gotten to a point where some tension had to be released. In that way, it seemed to me, it was pure baseball. It was as simple as physics.

“He could have done something to alleviate that,” my father said. “And anyway, you were the best team in the district with either of them behind the plate.”

“Shouldn’t the best man play?” I asked him.

“You’re all still boys,” he said. “There’s more to life than baseball. They’re his sons.”

I knew, even then, that to Coach Christen there was no separating any of it. We won state that year and the next year and the next year—though I only have the one ring. Didn’t make the team after that. I still have that championship ring, amethyst set in yellow gold, the colors of the Jaguars. I don’t remember much about that season. I don’t remember the championship game, who hit what, how we got the final out.  I just remember Yogi and Thurman, rolling around in the dirt, hitting each other over and over, trying to prove something to themselves and to their father.

Scott Ray is from Mississippi. He lives and teaches in Denton, Texas where he is a PhD student at the University of North Texas. He is the Production Editor for American Literary Review. His stories and poems have appeared or are forthcoming in Cold Mountain Review, Measure, Jellyfish Review, WhiskeyPaper and elsewhere. His favorite birthday gift ever was a trip to Chicago to see the Cubs play.

Pancho Muñoz is a Mexican art director & illustrator based in Mexico City focusing in character design and concept art. He's currently working on the second chapter to his comic Tomorrow Comes Today.