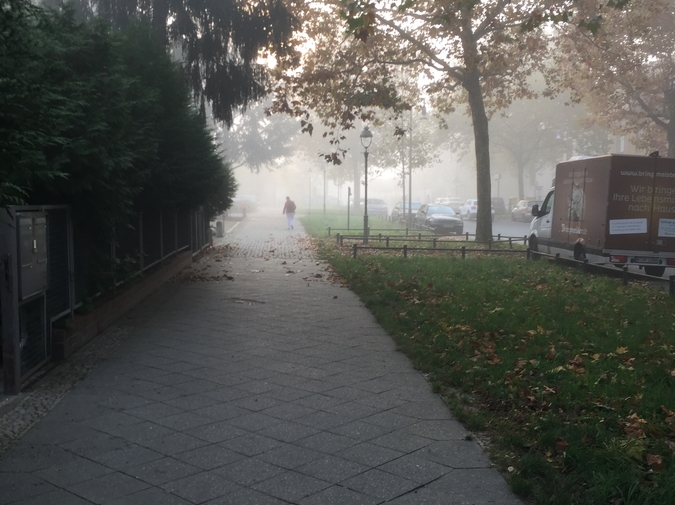 First, he ARRIVED – like the swans at Capistrano, or aliens in the desert, or, more likely, a flaming dessert.

“Who is that?” my friend Noelle said, poking me in the ribs; her inflection, a poke in my brain.

“No idea,” I answered. He looked like a young Warren Beatty, casual in a worn tuxedo, hair cut in a long, messy shag. Striding down the walk, he pushed his sleeves higher up his arms. This was a man who would woo women while washing their hair.

We watched him make the rounds of the party collecting smiles, hugs, and handshakes as if he was the only kid at a Halloween bash.

“Paul,” voices like hands called out, urging him to join them. Before saying hello, he tipped his forehead toward the ground, shyly, then looked up with a closed-mouth smile.

“That mouth,” Noelle said. “I feel nasty just looking at it.”

“What are you talking about?” I said.

“His lips look soft and warm, like a quilt. I want him to wrap me in his mouth. I mean – he’s - something. Shut up.” Noelle’s cheeks burned.

When I was thirteen, I slept over at her house. Her brother Danny drove up late that night. His headlights shined through the bedroom window and stayed on. We sat up in bed.

“He probably fell asleep in the car,” I said. We put on our shoes and walked outside to knock on his window. Halfway there, we saw the outline of a woman inside the car.  She was touching her bare breasts. Her mouth was open wide. Her body jerked so violently it was hard to tell if she was trying to drive her body into Danny or escape from her own skin. The glass muffled her moans but like my memory, they were long and deep. Soon, she screamed out with short, sharp cries.

The woman arched her back. She was beautiful. Her mouth was open wide. She was ugly.

The next morning, at the breakfast table, Danny was transformed into a being who could make a woman arch her back, open her mouth until it looked like a wound, and cry out with noises my own throat had never swallowed. I emptied my cereal bowl into the trash, uneaten.

He came to me like a record in the silent space before the needle finds the groove.

“I can only drive at night,” Paul told me on the phone. “I can’t stand the thought of people watching me in the car.”

These were whispered quirks, still cute, still completely possible to smile at.

Dressed all in black, with a single bear claw hanging from a piece of dark leather around his neck, he knocked softly at my door. I stood to answer and felt dizzy from holding my breath.

On my white couch in his black jeans and long black duster, I thought of chess. In front of me were opposing forces of color: the power of the black and the possibility of white.

His index finger and thumb lightly guided my chin to his own. Even before the touch, he held me.

In the background, Emerson, Lake, and Palmer sang. Moody music. Dark notes. Impossible to negotiate. I imagined each line a prophecy.

Do you light a lover’s fire

Do the ashes of desire for you remain

Night after night he arrived in the dark. We were relentless in our pursuit of pleasure, but the sex just went on and on like a terrible song stuck in your head. On the white couch, in the double bed, blanketed in the backyard, we wandered, searching for something that never quite came.

In pieces of moonlight, we posed. We clawed and slid and mimicked. Our videos would have been beautiful, but in reality, I couldn’t open my mouth wide enough. I would not be ugly.

One night, when there was no moon, he arrived. A fever blister in full bloom festered on my bottom lip. Because there was no possibility of sex, there was desire. My lips burned with pain as I opened my mouth wider and wider. The blood from the cracked blister became a potion slowly oozing down my throat. I was on a swing, the sting of the push, the freedom of the float.

It was possible, after all, which made it all the worse when it was not.

He arrived, on occasion, in the daytime. It was always a surprise, like a cool morning breeze during a hot Texas summer. In the middle of a mid-market department store, I arranged polo shirts on a table. Paul appeared, holding up a black shirt.

“Can you imagine me wearing this?”

He looked like the king rummaging through a villager’s yard sale. I imagined his arms in the polo shirt. How white they would be beneath the black.

He put the shirt back, unfolded, just as royalty would.

“The air conditioning,” he said, looking around as if he could point to the offending air. “On my skin. You know.” Each night, the air conditioner off, we melted into puddles of our own making.

“Marry me,” he said, dropping dramatically to one black-jeaned knee. He held out an emerald ring. It was something you might win at an arcade after playing the crane for twenty minutes.

Behind him, my co-workers circled around like women before an apparition.

“I don’t know about marriage,” I said. “But I will wear the ring.” Paul smiled, as if I’d solved a riddle posed by the troll beneath a bridge.

“I can’t imagine,” a woman who worked with me said later. “I can’t imagine how I could behave normally around him. He’s so handsome. It makes me ashamed he had to look my way.”

Her name was Betty. Betty’s face twitched below her right eye as she spoke. She told a few of us how her husband slept with her in the hospital bed the night she had a stroke, but by the third day, he was gone.

I should have said something kind to Betty, but I did not open my mouth.

I watched Paul walk away. At night, darkness softened his face, like a cool river running over rocks. But daylight was a show-off. The angles of his cheeks, the carved curves of his jaw, and the deep green of his eyes, the same green of the emerald ring, made me feel like I’d spent the day in too much sunlight.

It was summer. I could wear light dresses with thin bras, take jobs that didn’t matter, and be beautiful. Behind me, Betty said again, “He sure was something to see.”

I hated Betty watching me. I wore the emerald ring every day.

He departed – of course. This part of a story is always the worse. It’s only interesting to the teller. I stop watching the Wizard of Oz before the curtain reveals the little man behind it. I don’t want to know it’s all been for nothing.

By the end of the summer of Paul, I craved the overbearing beach with the sun’s strong fingers stroking my body until dark. We planned a trip, Paul and me, but it required driving during the day, wearing clothing without cover, and buying sunglasses that hid emerald eyes.

I went alone. Somewhere along the way, things turned ugly. I arched my back, opened my mouth wide, and the spell was broken.

Still, in the darkest of nights, I consider the possibility.

Denise Tolan is a graduate of the Red Earth MFA in Creative Writing Program at Oklahoma City University.  Her work has been published in places such as Reed, Apple Valley Review, Lunch Ticket, The Tishman Review, and Gravel. Denise was long-listed for Wigleaf's Top 50 and was a finalist in the 2017 Saturday Evening Post fiction contest.