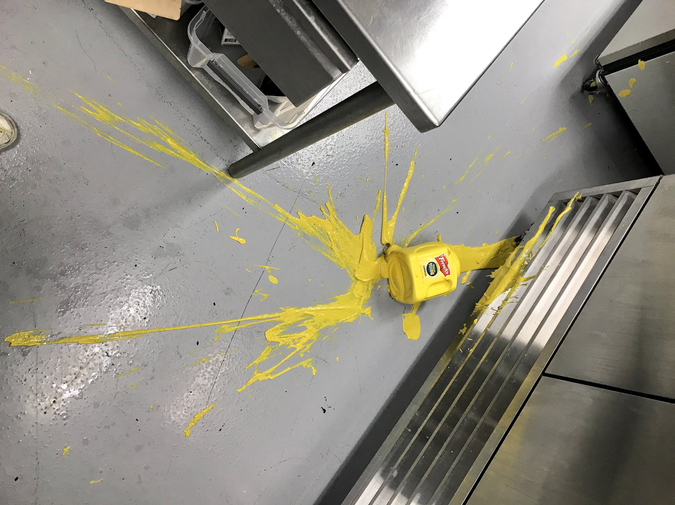 McGuiness in bed with chow mien. Eyeballs floating in melatonin.

Trapdoor in Benzedrine bottle on floor. Deep in beer can city.

McGuiness in rearview mirror, larger than he appears. Appears to be half-Chinese Clark Kent with chicken fried psycho eyes plus bulbous nose.

McGuiness on highway slipping through traffic like trippy worm thing that comes out of chest in Donnie Darko. Peak of early twenty-first century film-making. McGuiness did not understand. Neither did anyone else.

The Rat King Digression. A long time ago when the earth was without form and void and darkness was upon the face of the deep. And the spirit of God moved upon the face of the waters. And a little band from Pasadena, California known as Van Halen was rocketing up the charts. And Reagan was President. And black holes grew like sunflowers out of heaps of decomposing stars: the wondrous year of 1988 and nothing Orwellian had happened yet according to THE PARTY.  When McGuiness was a boy, before people called him McGuiness. He was Jackie then. McGuiness didn’t like Jackie but Jackie was always there. Jackie was a dinky little kid in a too-big salvation army t-shirt. His back-up t-shirts lived on the concrete floor of his room advertising last year’s movies and defunct local sports teams to whatever God was watching.

There was a drain in the middle of that floor. Sometimes things fell down the drain and disappeared forever. Sometimes there were syringes scattered around it. Sometimes there were junkies passed out on the concrete, skin peeling in the sunlight that drowned the cold stone beneath the windows. Other times they stabbed needles into their inner thighs in the corner of the room. The junkies liked Jackie for the most part. Junkies are well disposed towards people they don’t have to share their heroin with. And he wasn’t afraid of them either; his mother was one. She was around here somewhere: burning dope on a spoon and hitting menopause at thirty-five; eating food-bank Alphagetti on toast and dying of unsexy old diabetes.

His father? They’ll go fishing together in heaven one day.

And so it came to pass that the local high school kids who broke in on weekends had a feral little Oliver Twist to pick on. They got drunk and made lots of noise and fingered one another. The ones who didn’t get to finger anyone would wander around in tornadoes of shit-faced aggression. They’d find him in the room with the drain. They’d scream their sexual frustration in his face and he’d tell them to go fuck themselves in his unbroken little voice. After that there would be a moment of vibrating oxygen and the snot would wiggle down Jackie’s face and he wouldn’t know whether to wipe it or not. Then one of the boys would extinguish the moment with a fist or a running shoe in the boy’s squishy flesh.

A junkie named Ben gave Jackie amateur karate lessons. Jackie got pretty good. He broke a bunch of boards with one chop and a mezzo-soprano hi-ya. The karate did not ultimately protect his face- now an action painting of scar tissue and goo. It wouldn’t have mattered, the boys were beginning to feel bad about beating up a little kid and as more of them joined the finger club the abuse declined, but one boy was way too into it. He had some suburban name like Hunter and bleach blonde hair and a lip piercing that he had begged for at fourteen.

Hunter and Jackie grew up together in the hot and sour tangle of the predator-prey relationship.

And so Jackie built a predator of his own. He frankensteined rats together all through grade eight, fusing their tales with a blowtorch. He threw it in a cardboard box and spent high school poking his monster with syringes and getting it used to the taste of blood. And by graduation it was ready.

Hunter was graduating too. Business degree of course; four years of Coles Notes, beer bongs and Adderall and anyone can join the aristocracy if they make through the internship/hazing situation without too many tears. His blood was Bombay-Gin-blue already and maybe it was all that fancy booze that made him so slow and clumsy. So brain-meltingly stupid as he walked through that door and collapsed like a dead balloon on the spot where the throw pillows were supposed to be and hit hardwood instead.

He screamed until he realized he was being watched.

Jackie never stepped out of the darkness. He didn’t say anything. He didn’t have a line saved up for the encounter. And he had no desire to look his victim in the eyes or to identify himself or to see his tormentor weep and beg. No, he just did the job and, of course, you cannot begin to compare the screams of landing ass first on hardwood with the screams of the rats tearing his face apart.

The screams, they harmonized with the squeals of the rat king but it was easy to separate them. Pure joy and pure pain.

“McGuiness, you motherfucker. You fucking snuck out again! If you don’t call me soon I’m calling your wife etc. You limp-dick blah, blah, blah asshole. I don’t need this shit and so forth.”

McGuiness to voicemail: “Off you go.”

City on both sides like Ikea aisle. Wheels not necessarily on road. Automobile swimming.

McGuiness at smoothie store with cup of orange goo. “Smoothie is too sweet,” says McGuiness.

“It is made primarily of fruits which are renowned across the globe for their properties of sweetness.” –Smoothie technician.

“Give me money back.” –McGuiness.

“That is contrary to smoothie regulations. Smoothie technician, out!”

McGuiness full of bitter drink and running over pedestrian on city street.

Officer, “Into jail with you forever.”

“I was never here,” says Jackie, and he disappears down the drain forever.

Nikolai McLeod lives in Toronto, Ontario. This is his first published story.