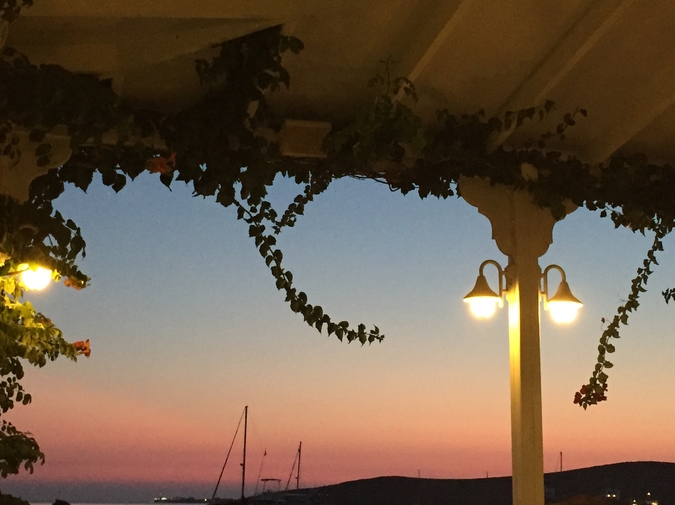 If I had to choose one moment that convinced me of my own insignificance, it would be that time I saw the world spin.

Several years ago, my father and I travelled to a tiny, sparsely populated village on the island of Crete. The journey from Toronto required two flights, an eight-hour ferry ride across the Aegean Sea, and a half-day odyssey up the arid mountains of Greece’s largest island. We were the guests of Nikos, an Athens-based surgeon who had invited us to holiday in his parents’ village. I never learned the name of the town but I knew that it wasn’t marked on any map, familiar only to those who lived there.

Once we finally arrived at Nikos’s parents’ house after two full days of travel, it was after dark. We were both mentally and physically exhausted, seduced by the concept of hypnos, and desperate to melt into bed. According to our host, however, there was a birthday party that night in the village. Attendance was mandatory, and as international visitors from Canada, we were expected as the guests of honor.

And so we were introduced to Greece in a state of discomfort and exhaustion, plunged immediately into an ersatz celebration for someone we did not know. A buffet had been set up offering fried rabbit and boiled potatoes but by the time of our arrival, the food had spoiled and the plates had been abandoned under a veil of encircling flies. I sat alone as nobody at the party spoke a word of English and because Nikos, the golden child of the village, had been kidnapped into conversation with his parents’ friends.

Across from me, an assembly of old ladies sat fanning themselves in plastic chairs, their swollen legs exposed to the dry heat. Barely lucid, I fixated on their calves and the swirls of varicose veins that decorated them. Those who wore black, Nikos had explained, were in eternal mourning. This was a place that respected vendetta culture and where many of the women had lost their husbands to murder; as I watched Nikos continue to ignore us, however, I admitted that the old ladies were no longer alone in their thirst for fresh blood.

My dad and I finally squeezed ourselves from the party at four a.m.; incredibly, we had been the first ones to leave. In order to reach our rental house, we had to walk half a mile up the road enveloped by total darkness. There were no street lamps to illuminate the way and I tried not to think about the possible creatures that might lurk behind the olive trees that framed the road. Our only source of light was the moon, that same opalescent bulb once known by Cleopatra and Julius Caesar, a vision that had risen every single night as the world of civilization and democracy developed underneath it. Forty-five degrees to my right, it was so large and it seemed too close; I imagined that I could inspect every detail on its surface.

The following day, Nikos’s family took us to visit a family of authentic Cretons that lived in Livadia, an isolated village on the top of a mountain. It was a place of thin air and violent sun; a place where every family had their own chapel, each floridly decorated with Orthodox icons and damp with the heaviness of spiritual gloom; a place where the shepherds wore felt boots and drank homemade raki and where the women had no place. We had gone to Livadia specifically to visit Maria, one of Nikos’s patients, but because she was a woman, she was kept in the kitchen. Maria’s husband, however, was absent as well, in court that day because he had lied to the government about how many goats he owned, and so he had asked his brother to come and take his place at the head of the table.

So for four hours, I had to listen to some man I didn’t know speak in a language I didn’t understand just because he was a man who was related to another man who was married to a woman we had wanted to meet. I had to eat plate after plate of food and once I felt like I could eat no longer and put my fork down, Maria’s brother-in-law picked it back up, speared a piece of lamb, and brought it up to my lips with a smile that threatened me not to resist.

That night, my dad and I unchained ourselves from Nikos’s family by midnight, and as we took the same route towards our house, I was surprised to see that the moon was hovering on my left this time.

“Why was the moon there last night,” I pointed to the right, “but it’s here tonight?”

My dad, the scientist, answered simply. “We came home at four in the morning yesterday,” he explained. “But it’s only twelve now. The moon will travel over the next few hours and it’ll be over there again at four o'clock.”

As I stared at the moon, I realized that this was the first time I was witness to something I’d only known as a concept. I was aware of basic astronomy—that the moon completes a full circle around the Earth in twenty-four hours—but I had never seen it, and so my logic had failed to solve the mystery on its own. And now, the concept was more than visible; it was vibrating, as if to attach itself permanently to my existence. If I lay myself in the grass of the green Greek earth, I could watch it slowly traipse through the night sky and disappear into the sunlight of the morning.

It was then that I realized how small I was, and how insignificant my biological role would be in this world. It was then I realized that someday, nobody would remember me. Nor would they remember the vendettas, the murders, or the widows; the hidden goats, the slaughtered lambs, the spoiled food; the chapels, the courthouse; Maria. I could try to remember everything for a long time but I realized that, one day I would be gone too, and I would take my memories with me.

I walked in the darkness but no longer felt alone or threatened by creatures human or mythical. The moon had revealed to me that Greece belonged to me after all—in the gift of experience—and this realization offered me an intimate sense of comfort because it felt good to know that I lived in a world that would continue to move forward, regardless of anything that would try to hold it back.

Sophie Narod is a writer from Toronto. She has lived, studied, and worked in several different countries and finds that her writing is often inspired by her observations of other cultures. She is currently at work on her first book, a memoir. You can follow her on Instagram at @sophienarod