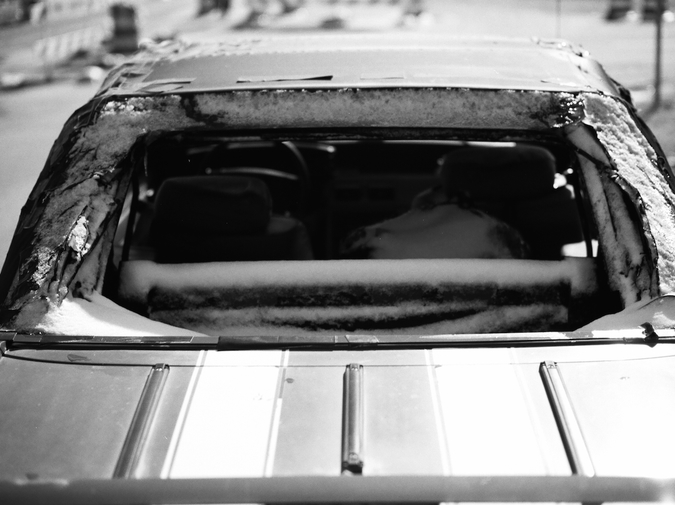 To see if I can still remember a phone number I no longer use, I hold the phone as if I am about to call, picture the face that once possessed that number, the position of a birthmark on their cheek, the thickness of an eyebrow, a yellowed tooth. I summoned, also, the wood paneling, the carpets stained by candlewax, the unfinished basement and its mildew. I know if I wait long enough, the right synapses will ignite. I know my fingers will locate the numbers on their own, that I can still reach anyone I have forgotten if I am patient.

If you want to remember a phone number without relying on your cell, you could chunk the information. Think about the numbers in groups as opposed to individual units, like a herd that grazes in the space between brain, tongue, finger and nerve. You could also assign a letter to each number. You could make a sentence out of those letters. You could write a story that begins with this coded sentence, and each time you read the story out loud, you remember that you should give that person a call.

I didn’t have my brother Patrick’s phone number until after my parents had been in a car accident. When asked about this, I said we aren’t close. I didn’t have any other way to explain that I didn’t know how to talk to my brother.

Reasons phone numbers may be disconnected include death, poverty, forgetfulness, divorce, abandonment, independence. Available phone numbers are limited. Cell phone numbers may be recycled once disconnected, a process fraught with potential security issues. Any account information, from banks to email password retrieval, may still be attached to the phone number. How many biographies can become attached to one number over time?  When a San Francisco man, Frank Therre received a new phone, he discovered he was being charged for a texting service that he did not recognize. Frank learned the previous owner of his phone number used that number to sign up for a texting service. Who knows what other history burdens the numbers you carry with you? You must be diligent about the numbers you leave behind and the numbers you will become.

If, like me, you called a Teddy Ruxpin phone line, and you may have seen a very large, very expensive phone bill. You may have realized then how the cost of our stories and songs accumulates, that you may not be able to afford every story you want to hear.

The state trooper on the phone said words like bad shape … drifted … road ... tree …spin. He said helicopter. He said cut open. He didn’t say what I saw when I closed my eyes. He didn’t say blood or shrapnel. He didn’t say glass sliver. He didn’t say open fracture or tongue or thumbnail or engine. He said lucky. Lucky the machine that splits open steel. Lucky the eye through dust and daylight. Lucky their stubborn bones.

I received a text from a woman addressed to a Karen and Ron who, apparently, were her neighbors. Her message alludes to a recent hospital visit, blockages that, thankfully, the doctors did not find. The woman was grateful for the soup and flowers that Karen and Ron gave her. I loved the tenderness of this message so much I hesitated to answer. I didn’t want to reveal to this woman her mistake, worried this might spoil the gesture, somehow diminish its value. I wanted to maintain this veil of gratitude. Eventually, I responded to let her know the truth, glad to hear she was recovering well, and I hoped she would find the person she wanted.

Known as the Beep Line or Jam Line or Beep-Beep Jam Line, a flaw in the telephone lines allowed people caught in a busy signal to talk to one another. In the 1960’s, this became a way for teenagers to meet, to exchange phone numbers, and to know people outside of their immediate social circles. Many lied about their age, name, constructed identities that could only exist there in the purgatory of a busy signal, a city full of young ghosts.

Hello beep is beep anyone beep out beep there?

A friend would call me on his break from a payphone outside of his job. When we had nothing to say, we would sit on the line in silence. I listened to the thrum and whine of the traffic in the parking lot, to the trill of the birds in the oak trees or on the telephone wires, waiting until the phone asked him to deposit more change, reminded us that this silence is not free.

I miss the jangle and clank a quarter makes after I slide it into the coin slot of a payphone, listening to the clamor on the way to a dark pocket.

During a lull on our phone call, my wife hums a tune I don’t recognize until one of us remembers something we hadn’t shared before.

What relationship is not also a history of silences? What conversation is not an act of reinvention?

Now when someone calls instead of texts, I worry the person is calling to let me know about another relative who passed away.

My father’s voicemails always begin with the announcement that he is, indeed, my father. Perhaps he worries that I will forget his voice. I imagine the voices of the people I have lost, the uncles and aunts. Whenever I recall my grandfather’s signature whistle, he is standing in our living room, dressed in late afternoon sunlight.

After a dream about my former piano teacher, my mother calls her the next day. My teacher’s husband answers the phone, tells my mother they buried my piano teacher last week.

I was eight when I hung up on the phone psychic who told me I was doing something I should not be doing.

For a few years, I worked at a call center where I called businesses to arrange contact with sales representatives. One of my responsibilities was to clean the records. I had to check the information for accuracy. Confirm the address, the name of the company. Confirm the decision maker, the person responsible for the financial decisions. Confirm who might be interested in videoconferencing or cleaner uniforms or a more efficient delivery route. Establish a rapport with the gatekeeper, the person between me and the decision maker, often a receptionist or assistant: Hello Amanda. Learn that Amanda prefers Mandy. Call again. Hi, Mandy. Hi, is Robert there? Does he prefer Bob? Always ask questions: When will he be back? How does he like his eggs? When was the last time he had his teeth cleaned? Convince the gatekeeper we had spoken before, that they may have invited me to a barbecue or birthday party at one point.

People can hear a smile over the phone. The muscles in the jaws of the listener may mirror the expression of the speaker, as in you may try to become the face of the sound you hear.

Sometimes, I called a person who had died, their coworkers in the middle of their grief, the death recent. Sometimes, the death was a year or two ago, and I come with the name of a ghost. Sometimes they were surprised to hear a name from so long ago. Sometimes they laughed at me, pitied me for trying to reach the dead.

Trying to convince the man to talk with a sales rep, he asked if I was Filipino.

Yes, I said. How did you know? I spun my head around the room, peeked around at other cubicles.

I can just tell, he said in a voice like my father.

What is the shape of a Filipinx voice and how do my sentences fit inside of it?

I used to correct my mother for the mistakes in her pronunciation. She asked me to do this, to help her words be more American. I don’t correct her anymore but listen to how she bends America in her mouth.

As my parents recovered, my father still unconscious, a steady ketamine drip. I listened to the voicemails they left for me, the ones I ignored, unanswered. How many of my calls to them started “Sorry, I meant to call you sooner”? I wanted to save every message, certain I would lose them to silence.

The last message mistakenly sent to me instead of Karen asked about a recent medical procedure and the status of Karen’s recovery. How long was this silence before the woman decided to send this message? Silence elongates time. I responded with an apology. I texted I am sorry, I think you have the wrong number, as if this is the first text I received from her. Let us pretend we are all new at this. I hope you were not too late. I am sorry, I texted. This is not Karen.

Albert Abonado is the author of the poetry collection JAW (Sundress Publications). His writing has appeared in Boston Review, Colorado Review, The Laurel Review, Lunch Ticket, The Margins and others. He teaches creative writing at SUNY Geneseo and RIT. He lives in Rochester, NY with his wife and a hamster.