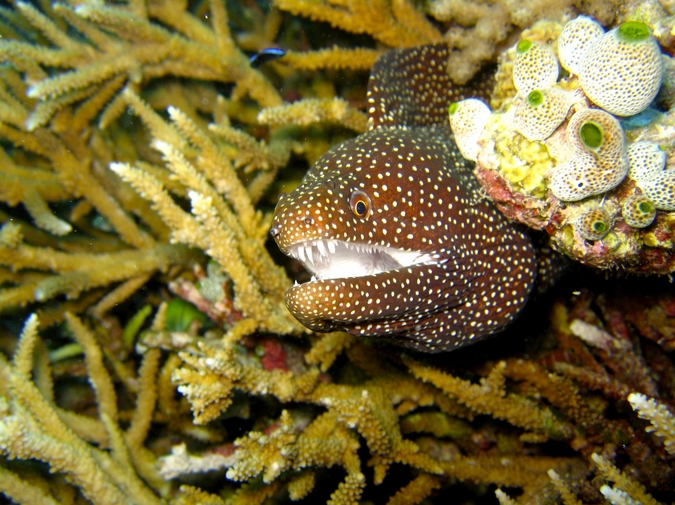 We know we are eels. That is, yes: the issue at hand.

It’s your fault, you should know: this knowledge. Before, we were ignorant of our existence atop this tower in Tokyo. Like mindless grass we would lurk in our saline loll and bide until the arrival of food from our keepers above. It was easy, this life. We’d chatter before the lights awoke and we became the receptacles of your leers. The only reminder of our tank was when your children gawked and proclaimed us 美味しそう (looks delicious!) and smeared a ragged echo of their hands onto our glass walls. But these hands and their owners are faded, now. All that’s left is our reflection.

Which, truly: sucks. Take this reflection back. We have no need for it.

Let Us Out, we cry now, to another keeper. Take Us Home. Allow Us The Freedom Of Being Eaten By, I Don’t Know, Seals? Do Seals Eat Eels? Whatever. Give Us The Option, At Least.

OK, Fine, we argue. Let Us Be Eaten By Dogs. Just, Please. Anything But Here, Alone, With This Mirror.

You leave. You leave us with your names like Momo, or Rin, monikers that loiter, fester like shards of plankton in the tooth. Names, a manmade scalpel, cleave us from the herd: remind us again that we are, we always have been ‘alone’—to us, a newfound concept.

This self-recognition, we’re told, is an indicator of your definition of ‘intelligence.’ Years and years ago a human named Gordon Gallup Jr. created what is now known as the Mirror Test. Paint a reddish dot, say, onto the throat of a magpie, he said, and place the bird in front of a mirror. If the bird pecks at its own throat, it knows what it sees in the mirror is itself. If it attacks the dot in this mirrored stranger, however, it lacks what humans deem their marker of worth: self-awareness.

We describe, thusly, Mr. Gordon’s theory: Dumb, Myopic. While it’s true, at first, we saw our reflected selves as a Familiar Other, curious spectres that no longer needed the assurance of water, you shouldn’t consider this a diagnosis of stupidity. We just tend to listen to the world in a language other than eyes. It’s only after the aquarium was emptied and silence exhaled like a white mold within our tanks were we forced to rely on our sight. And then: like the 目目連, or the 傘お化け, from the ghostly lore of our keepers: like these paper walls from abandoned homes, or the mothtorn remnants of discarded umbrellas: your neglect, your absence, filled us with an unbidden animacy. In your silence, we possessed, we haunted ourselves.

And how is an object haunted, these stories say? Easy: when it grows eyes.

We stared, for weeks. And then: we knew. We saw us as us.

No wonder, we realized, so many other species tended to regard their reflection with hostility.

Time passed, yet our awareness remained. The fingers of our vision palpated the limits of this glass. We were trapped, we learned. In our genes was still embedded the ancestral joy of open waters. We soon saw our keepers as captors. That’s why we’d burrow into the sand when they approach. Not because, as they claimed to your newspapers, we were ‘shy,’ or ‘lonely,’ or ‘had forgotten people.’ Quite the opposite. In the merciless chain of hours between your visitations we’d remember what you’d done to us.

‘Please show yourselves,’ our captors entreat us with a wary knock. ‘Are you there? Are you sick?’

We’re Sick All Right, we shoot back, burrowed within the dark comfort of sand. Sick Of Your Meddling. Sick Of Your Belief That Our Constraintment Is Your Entertainment. Just Absolutely, Downright Sick—

‘Eh, let’s try tomorrow,’ says one, as they shuffle away.

‘I don’t know why we bother anymore,’ says another.

Yes, ‘Bother,’ we grumble. What An Apt Choice of Word.

Of course, they did not (could not) listen. We were left to linger, here. But they did offer a kind of respite from our self-recognition: a Face-Showing Festival, it was called. Soon, screens and screens adorned the periphery of our tank. Human faces blotted out our reflected own and called to us from around the world, insistent on burdening us with their memory. At least we were no longer alone in our mild fear of mirrors: as their exposed vacant grins sang to us tipsy lullabies or complained of a ‘constant lack of TP’ their gaze would dart to the corner of their screens, where their reflections hovered, wraithlike. Frantic, they obsessed over facial blemishes, newfound lacks of hair, wrinkles like starved tributaries along the outskirts of their eyes—eyes that’d flick askance, again, throughout our call, as if on the lookout for an unseen shark that hungered in the murk.

‘Oh, God,’ a human might say to us. ‘All these meetings from home, and all I’ve got time to do all day is look back at me. At this,’ they’d add, and prodded their chin.

Others spoke of despair in ways unspoken: illustrated to us, say, in the myths of sunlit picnics beneath the sparse cedars at the local park, cordoned now with yellowed tape, still visible from their window. ‘Here, look,’ they’d entreat us, and tilted the camera. Or: they’d vocalize the vestigial miracle of warmth from lovers who moved out ‘in the midst of it all.’ A human showed us framed portraits of his boyfriend. ‘Ex,’ he corrected himself. ‘He was (is) a singer,’ the human told us, ‘and he’d sing in our home. But now he’s left,’ his eyes elsewhere, ‘and all he’s left me is my own voice.’

Most, however, said not a word. They looked at us, curious, starved for a gift we could not give. In the carved yawn behind their eyes we saw a wish similar to our own: we saw primal dreams of aphotic zones, fathoms beneath the ocean where light and its rancid corollary could no longer harass us, its only pale surrogate the bioluminescence spat out by lonely jellyfish, those empty peristaltic comets. We, too, ached for a home beyond the capacity of reflection.

On May 13th, 2020, at 2:47 AM JST, a human named Jordan Sutlive called us on FaceTime. He was in his childhood bedroom, in Texas, in a crumpled sweatshirt he’d worn for countless days, his eyes bloodshot from a lack of sleep and glut of coffee, in the midst of a manic episode. (We do not know this, of course—but he does, which is why we know this.)

ちょっと聞きたいことがあるんだけど、he began, with his four years of weak Japanese, いや、違う。教えたい？ ‘What,’ he stammered, ‘What do I want to say to you?’

Look, It’s Fine, we assured him. Just Say What You’d Like To Say. No Need To Impress Us.

‘OK,’ he said, relieved. ‘I just: I thought I should tell someone beforehand. I think I’ve stockpiled the Klonopin I need now, so.’

How Much? we asked.

‘Enough,’ he replied. His smirk twisted, like the throat of a plastic bag: the kind used to bear aloft our dead.

And What Made You Decide This? we asked. For now, for whatever reason, all we wanted was for him to keep speaking, about something, about the air. We pitied him. We’d known of this affliction before. Parasites were known to attack our kin: smuggle their way into the brains of caterpillars, who’d then migrate, beyond their own volition, to the higher leaves, where they’d await their hijacked demise from the beaks of songbirds.

‘I don’t know why,’ he replied. ‘I just feel: nothing, now. Like, Capital-N Nothing. So I think I’ve just managed to tell myself a story about how this’ll be better. I mean,’ he added, and rattled a nearby bottle, ‘you know how it is. Some things are easier to swallow if you tell yourself a story first.’

What Kind Of Story?

‘An escape story. A way out. Y’know, all I look at all day is walls. This is a way to give myself a door.’

Trust Us, We Understand. But Consider:

How Might This, Instead, Become A Story Of Your Survival?

He paused. He looked outside. From his window he saw a neighbor water her azaleas. It was clear now that she needed to water these plants as much as these plants needed the water. She’d helped Jordan when he was a child, you should know, and locked out of his home. She invited him inside, and made him iced tea, and let her tell him all he knew about the ocean.

‘I just don’t know,’ he responded, after awhile. ‘I have no clue how that kind of story begins.’

Well, we said, and clambered out of our holes in the sand, to swim to the edge of our world. Stay Here, For Now. We’ll Figure It Out Together.

‘You promise you’ll stay?’ he asked.

Well, Of Course, we said, and gestured at our walls. That’s What We Do Best.

He left. We remain. We will wait until the lights die for good, or we do: whatever becomes first acceptable for you to stomach. As we wait, we pray for rest in our wordless tongue. We pray to you, all of you, you who have waded into an ocean we will never know, who possess an unbridled life beyond this weak need of glass.

All we ask is for you to swallow the pain of my reflection.

J.T. Sutlive is a MFA candidate at University of Nevada, Las Vegas, and an Editorial Assistant for The Believer. He splits his time between Las Vegas and San Antonio, Texas.