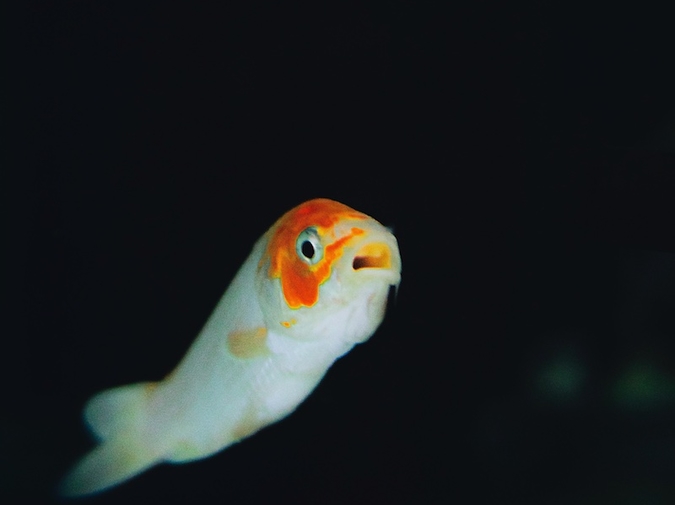 The family gets there just before closing. The listing was for an ancient scarlet macaw—a pet store outside South Bend a couple of hours’ drive away. The macaw is listed cheap because it's so old. Inside, the smell of cedar wood-shavings, the glare of florescent light. Dogs bark behind a glass wall. But one dog’s bark rises above, comes from a large brass cage in the back: from the ancient red, blue and gold macaw. Barking, hitching side to side beside a fish tank of silent iridescent fish. Their colors glare back at him like a shattered mirror. The parrot's flamboyant red and blue plume cocks, shivers. The family approaches. They pass narcotic tanks of fish, come up now beside the brass cage. The parrot towers over this boy. His mother is pregnant, and stands back.

Fish calm him, says the pet store owner, a compulsive liar. But only the animals know this. Here, put this on, this liar says. He hands the father a thick canvas and leather glove lying like a severed hand on the top of the cage. Responds to the name, Fernando, the owner says. He’s not even cognizant of this lie. It’s just a part of his body. But in truth, once, in Spain, the bird knew a Fernando. A pet dog of a Basque family. A dog that dozed beneath his cage on hot summer days. And so the name gets him. Gets his attention. The boy sees this. The boy sees the giant macaw’s alert eyes, the longing.

There is a small brass lock on the cage door. These voices. How did he get here? How can he remember so many people’s words? His dinosaur eyes inspect the gloved hand. The lock is a toy with a small key inside. He's about forty, the owner says. He unlocks the cage, and leaves the key in the keyhole.

From the opened cage the bird's wings twitch half-cocked. The father extends his gloved hand and the bird reaches out with a talon and taps the crook of the father’s fingers. The boy reaches to stroke beneath its hornbill. It’s soft there. Down under hard seashell jaw. David, the mother says, and the pet store owner says, Oh it's okay—he's perfectly safe. The great bird crouches and takes the boy's finger between the pincers of its beak. But it’s true, he’s gentle. The owner taps the cage and the bird flaps back in. The owner closes the door, and the bird whistles, clicking its thick black tongue. The parrot barks as they walk away. The other dogs, their mindlessness tricked, bark at the glass wall.

It’s seventy-five dollars. Cheap, because of the advanced age of the bird. The father is paying up front. He’s paying and the boy is trying to do the math. It's less than two dollars/year—what does a dollar mean to a jungle, high in the canopy? Is it just another leaf?

Brass wire creaks in the back. The parrot stands in the unlocked cage's doorway. Well look at that, the owner says. He got out on his own. Never seen that before! Earlier that day, this owner called seventeen people to say their pets were ready. We've got them all fixed up and ready to go, he said. He'd just found all these names in the rolodex. He was lonely. He put faces to each name: dream faces, faces of people he’d once known, or strangers he’d seen in a park or a store. No one he called from this rolodex was expecting pets; they were just prior customers. They were strangers but for that one thing. And mostly they were answering machines. And this is who he spoke into. Often on the slowest days, he’ll talk at the animals. He’ll listen to them say nothing back. Except for the parrot, whose senseless chatter often comforts him.

The parrot launches from the cage at the fish tanks. Lands and pecks at the sealed top. Wings flap as the tank tips. Dozens of tiny fish spill onto the floor.

The bird dances a mazurka on splashing colors; he says: We've got them all fixed up and ready to go, in the voice of the owner.

The drive home the boy falls into that liminal space between sleep and waking. He lies next to the cage tilted on its side in the flattened bed of the station wagon. The bird whispers into his ear—not words, just the sound of a rubbing confidence where words don't need meaning. Parrot koans. The great doubt, it begins here, in the back of a station wagon leaving South Bend for a modest old home in Fort Wayne. The parrot’s whispering sounds sad and thwarted. As if the bird were testing the boy. Perhaps this one will understand? The boy half-dreams this whispered moan threading through his brain. As if it were some future language he'll come to learn. But the wordless dream threads other things into it. His mother making blueberry pancakes back on the lawn after it rains, a snail inching imperceptibly on the grass. We'll be there soon the boy dreams he hears. The station wagon's front window cracks and roars. The father's lit cigarette embers spark from the comet in the window. Memory sucks into the night air and glitters past the back seat window. The boy’s father's is producing a surplus of stars. The parrot whispers: We are all alive. And this, this is the only future for a time.

A week later, the pet shop owner discovers blood blossoming in his urine. And later still, the slight pain in his lower back grows palpable and howling. He will stand in front of the mirror and whisper: You're a good looking guy. It’s what he says every morning, looking close into the mirror, where he's farthest from truth. Then he’ll say we are all immortal. And he’ll recall the parrot who once lived in his store. Who often talked to him.

David Ryan is the author of Animals in Motion: Stories (Roundabout). Upcoming work appears in New England Review, The Common, Juked, the O. Henry Prize anthology 2022, and elsewhere. There’s more about him at www.davidwryan.com.