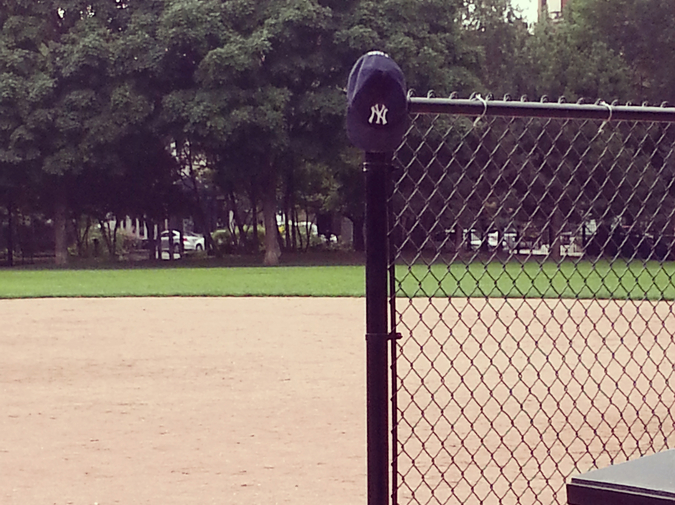 Has a rich step-dad ("a leader in the film and business industry") to whom I recently sent an email begging for a job. His biological dad was the coach, a tall, lanky figure with sad eyes. I want to say his name was Carl, but I'm just not sure. The names change. Henry's mom, pretty, also tall, was significantly younger than Carl, and it seems inevitable that she would eventually leave him for the wealthy, albeit squat, step-dad.

I wasn't playing baseball anymore. I don't think Henry was either. No more pizza parties, no more colorful banners emblazoned with team names. This was a season of separation and divorce. My mom told me not to bring it up. He cried when his parents sat him down to break the news. I cried too when my parents sat me down to break the news. This was the last time. This is the last straw, I might have said. I sat in the bathtub and read "Who's on First?" I rubbed my fingers over the tub's glossy blue tiles and wept.

Could be anyone by now. I hope he's okay. I hope they're all okay.

Was black, or rather, half-black and half-white. His biological mom was white. She had short, gray hair and the linguistic affect of an east coast childhood. I never met his biological dad.

We sat on Tam Valley School's shabby center field and picked at the dying, coastal grass. There were rumors the Giants were planning to sponsor a renovation, though now, years later, the field is just as torn up.

Benjamin picked up a sharp rock, weighing it in his glove hand. I want to run away from home, he might have said, faster than I can run around the bases.

I said, You can run the bases faster than anyone I know. I nodded my head. I ran my fingers through my hair, my thick, Jewish locks. I half-wanted to run away too.

My hair, according to my dad, comes from my now deceased Polish grandfather. So does my good hand-eye coordination, my bad batting stance, my propensity for easy love.

Of course this was a season of moves. The Giants left Candlestick in the dust. My mom moved to a duplex on Elinor.

This was a season of half-wants and haircuts.

Were identical  twins on the last little league team on which I played. That was 6th grade. They were in 8th. Their dad was a doctor. He was also the head coach. There were so many coaches, so many parents. Mill Valley was a town filled with encouraging adults, moms and dads with freckles and pagers, who could never let go, who dreamed of a world in which we could do anything, who worked, tirelessly, against time.

My parents were no coaches, could barely throw a ball, spoke often on the politics of little league and the newest trends in psychosomatic therapy, were lost themselves for years on end. They tried their best to let me go, to let me dream. They pointed their fingertips at large, laminated maps. You can go anywhere, they said, just pick a place. But still they clutched my shoulders, held on tight, still they hold on tight. I still hold on tight, have trouble letting go.

The twins's sister was my age, also in the 6th grade at Mill Valley Middle School, a place I associate(d) with prison, though I also had (and still have) an unhealthy tendency for exaggeration. She had a hearing aid and long straight hair with a part down the center. She came to every game and passed the innings in the dugout, standing beside her doctor dad, running her hands cautiously through her parted hair.

When I was up at bat, waiting in the uncanny quiet that comes right before a pitch, I looked at her. Then I looked at my parents at opposite ends of the bleachers.

Remember, my dad called out, if you hit the ball, don't throw the bat.

I looked at the catcher behind me. I looked back at her in the dugout, smiling beneath the part in her hair, waiting for the world to open up. I squeezed at the bat's grip until my hands went numb, I closed my eyes and swung.

I don't have a photo with which to check my memory. He was kind, I remember that. He learned to throw a curve early on before the rest. He had platinum blonde hair and freckles on his nose.

We walked down from his dad's house to Boyle Park and practiced fielding balls around its tidy infield, taking turns at bat. We ran drills right through sunset, right into the dark, hardly speaking. The air was cold and wet. We couldn't see the ball, we couldn't see our hands. We forgot about parents and home and dinner.

Now, years later, it would be so easy to forget James, to forget these little league friends of mine, wherever they are, whoever they've become, to skip them over like a scratched record, a bad bounce through a pair of scrawny legs.

This was a very long season. We kept going, running drills as long as we could stand. This was a season of memory and eyes closed forgetfulness and tired feet. We kept going. We kept going, imagining our future, our better, older selves. We went until we didn't need our sight, our eyes shut, the whole world shrouded in perfect black, just the sound of seams whistling through damp, manicured grass.

Dylan Fisher lives, for the time being, in Duluth, MN. (There was once a minor league baseball franchise in Duluth, called the Dukes, dissolved in Middle West tragedy.) He writes fiction and poetry and non-fiction and late-night tweets (@dylfisher). He calls his parents weekly. He misses home.