Men Decide They Want Something 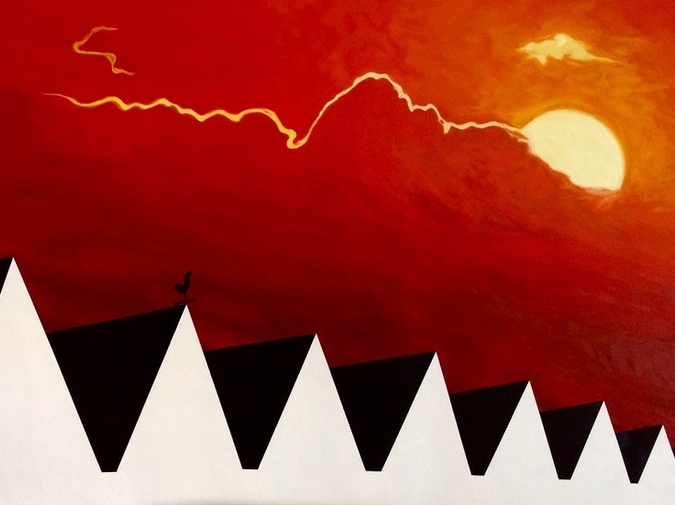 On their walk to see the world’s most famous geyser, Bea’s father swung his arms in that breezy way of his, as though the world were a shiny package with his name on it. Bea’s mother had stayed behind in the motor home Bea’s parents had rented for their three-week tour of the national parks of the West. A few days earlier, Bea’s mother had missed the redwoods, too. The way she crossed her arms, tight as a constrictor knot, she seemed to Bea like a genie trapped inside a lamp. That made Bea’s father the untethered mortal, perfectly content to let the genie remain bottled up.

While they waited for the geyser to erupt, a woman with long, long legs, her shorts like the red tips of two matchsticks, smiled at them. Bea thought of the women in the magazines hidden behind her father’s record collection, their legs wishbones. Bea’s mother was no wishbone. But sometimes she was a spine, the bone that took grit to cut from a chicken’s back if you wanted to butterfly the bird and roast it with potatoes and carrots and butter. Other times she was more like a wing bone, folded in on herself.

Bea’s father smiled back, and Bea thought, this is how highways are made to tunnel through mountains: men decide they want something.

Bea had read at the Visitor Center that Old Faithful was once used as a laundromat. The first white men to set foot in Yellowstone—trappers, fur traders, miners, gold prospectors, explorers—didn’t have wives in tow to do their washing for them. They laid out their sweat-stained clothing while the geyser was quiet, placid. They backed away and waited for her to erupt.

There was no doubt in Bea’s mind that they referred to the geyser as “she.”

Bea decided that she would buy her mother a gift in the souvenir shop.

She chose a shot glass, thinking it was like the thimbles her grandmother collected, a trinket meant for display. But when she presented it to her mother that evening, her mother said, “I don’t mind if I do.” Then to Bea’s father, “This your idea? Get me so drunk I’ll forget?”

Bea’s mother drank tequila from the little glass etched with a drawing of Old Faithful erupting. Bea imagined the liquor hot and bubbling inside her mother.

Geysers erupt because they have a circulation glitch. Heat gets trapped deep inside. The heat eventually becomes so great that it overwhelms the pressure preventing its release. Like holding one’s breath. Most people can fight the impulse to exhale for only 30 seconds or so, maybe a minute if they’ve practiced. The build-up of carbon dioxide makes the chest feel like it’s going to explode.

Bea’s record was a minute and twelve seconds.

Bea’s father had a habit of moving his pawns before he’d counted. When Bea’s mother criticized, he said that he didn’t need to count because he had the instinct of a Jedi. That evening, however, he landed a pawn on a space occupied by one of his own pawns, an illegal move.

Bea’s mother shook her head. To Bea’s father, she said, “I’m surprised your Jedi powers didn’t guide your hand swiftly to the pawn that can kill my pawn.”

To Bea, she said, “Your daddy believes that everything will work out in his favor, that no effort or forethought is required.”

Bea thought about how earlier that day, her father had led them off trail despite signs warning about the contamination of delicate ecosystems and the physical dangers of hot springs. He’d waved his hand in dismissal, said, “They just don’t want everybody doing it.”

Bea’s father said now, “Well, since it’s against the rules to land on my own pawn’s space, I guess I have to kill you.”

Bea’s mother said, “No, you don’t. It’s a choice. Take responsibility for your goddamn actions.”

Bea’s father sighed. He picked up the only other blue pawn he still had in play, counted ten spaces, and landed on a space occupied by one of Bea’s yellow pawns. “Sorry to have to kill you, sweetie.”

Bea said, “Sending a pawn back to start doesn’t kill it.”

Her mother said, “That’s one way to see it.”

That night when they thought Bea was asleep, her mother said, “I’m maxed out. Full to the brim.”

Bea had read that everything from socks to bath towels to a sofa had been found in the Yellowstone geysers and pools. That’s why Morning Glory Pool’s colors had faded from a shimmering sapphire to a rusted blue.

What else she’d read: A tourist recently wandered off the designated paths and fell into an acidic hot spring. His remains were unrecoverable. Other tourists had been gored by bison, one because he was trying to take a selfie with the animal. A man and his son loaded a baby bison into the back of their SUV because they thought it was cold. The animal had to be euthanized.

Upon exiting the park the next day, Bea’s father drove over two squirrels crossing the road. These were the second and third incidences of vehicular squirrel-slaughter during their grand tour of the national parks of the West. The squirrel’s bones beneath the tires shook Bea and her parents as though they were pennies in a jar. Bea’s mother screamed. Bea’s father said nothing, kept driving. The way he gripped the wheel, Bea hoped that nothing else got in his way.

Michelle Ross is the author of There's So Much They Haven't Told You (2017), which won the 2016 Moon City Press Short Fiction Award. Her fiction has recently appeared or is forthcoming in Electric Literature's Recommended Reading, Tahoma Literary Review, Threadcount, TriQuarterly, and other venues. She is fiction editor of Atticus Review. She lives in Tucson, Arizona. www.michellenross.com

Mike McGowan received his MA in fine art in 2010 and you can view his art at www.mikemcgowanart.com.