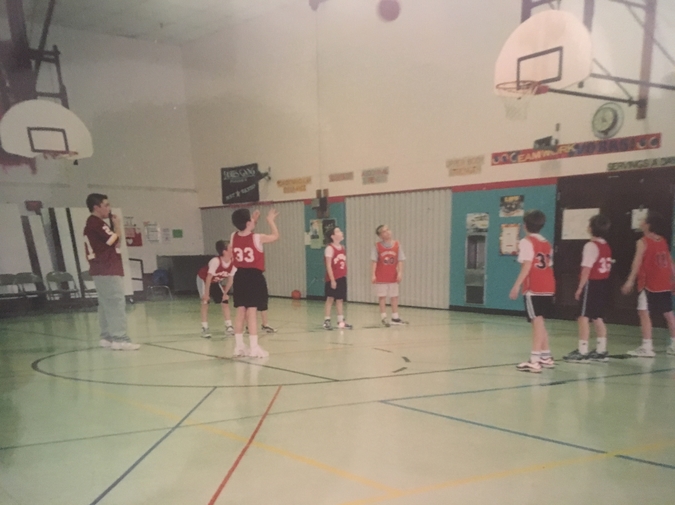 My brother was five when he began sharing a room with Cal Ripken Jr. of the Baltimore Orioles. It was 1995. We lived an hour from the city. Cal had just broken Lou Gehrig’s record for most consecutive games played with 2,131. The full-page newspaper spread in The Baltimore Sun featured a photograph of Cal removing his cap to a Camden Yards full of fans. It was put behind a wall of glass and added to the mini-museum my dad had already started in Michael’s room.

I like to think this collector’s mindset was passed down from my dad’s dad, who we called Boppy—the name a mini-museum of Michael’s little-kid speech impediment. Boppy was a big man, a quiet man, a handyman. When Michael was two and accidentally ripped a piece of paper, he wasn’t concerned, because he knew: “Boppy fix it.”

Michael’s certainty came from Boppy’s. His similarities with Boppy—and in turn, our differences—were most obvious on the basketball court. I was all travels and too much thinking, too many cuss words leading to technical fouls, tears after a loss or bad game. My brother was quiet and composed and boasted the smoothest three-point stroke in town. Senior year, he broke our high school’s three-point scoring record. My family still has the enlarged wall-of-fame headshot that came as a result. The next year, Boppy got sick.

When the Maryland Terrapins won the NCAA Men’s Basketball Championship in 2002, my dad insisted we each preserve a copy of the Sports Illustrated cover featuring the tournament’s Most Outstanding Player: Juan Dixon. Years later, I removed the frame from the wall in my bedroom at my parent’s house. I moved it to a dorm room four hours away for the first year of the final stage of my basketball career.

A few years passed before we learned Boppy couldn’t fix his sickness. Quiet, composed. At the memorial service a few weeks after he died, Boppy’s grandchildren took the mic to read a poem I wrote about his quiet confidence. Michael choked up on-stage.

A few weeks later, I decided to leave Juan in my parent’s basement and move to California. My mom wasn’t emotional when she told me any of the news about Boppy—the cancer spreading, the treatment stopping. But she cried when I told her I made up my mind about San Francisco.

I arrived in California to find Steph Curry waiting on my doorstep. My dad had packed my sports loyalties inside a cardboard box and mailed them to my new apartment. I was never a Wizards fan, so picking up the Warriors was an obvious choice. I still support the Orioles and the Caps. The Terps are non-negotiable.

My first year in California, the Warriors won the NBA Championship. The Curry jersey my dad sent became my favorite piece of apparel. My friend Suzanne, the closest thing I have to west-coast family, bought me a Dubs beanie, topped with a blue and yellow ball, to go with it.

A few weeks after they won, I passed Steph Curry in a bookstore. He was celebrating on the cover of the commemorative Sports Illustrated issue. I made eye contact, made the purchase, stored it between other magazines on my bookshelf. A few days later, my parents called to tell me they were thinking about moving. I wondered about Juan—what box he was in, if the glass was still intact.

Sometimes I think about my brother’s tears at Boppy’s funeral, my mother’s tears before I left. They make my family’s obsession with memorabilia feel logical, if not inevitable, if not universal. We cling to victories to offset losses. We keep what we can and box what we love because so much lies beyond our control.

Quiet, composed. When Michael’s college basketball team won the conference championship, the whole family was there. But my dad preserved the moment anyway, freezing the unexpected celebratory yell that came from my brother as his team cut down the nets.

None of my teams won anything. Freshman year was probably the best shot. I transferred schools when Boppy got sick; the years after were shrug-worthy at best. The final game of my career, my team and I were all travels and turnovers and cuss words. But the whole family was there. My dad pulled out his phone, snapped the picture, sent it to me.

In the picture, I’m still smiling. My jersey is untucked, Boppy on one side of me, my grandmother on the other. It sits in a stack of photographs on my bookshelf in San Francisco, not far from Steph Curry.

Still, I haven’t decided if it’s ready for a frame.