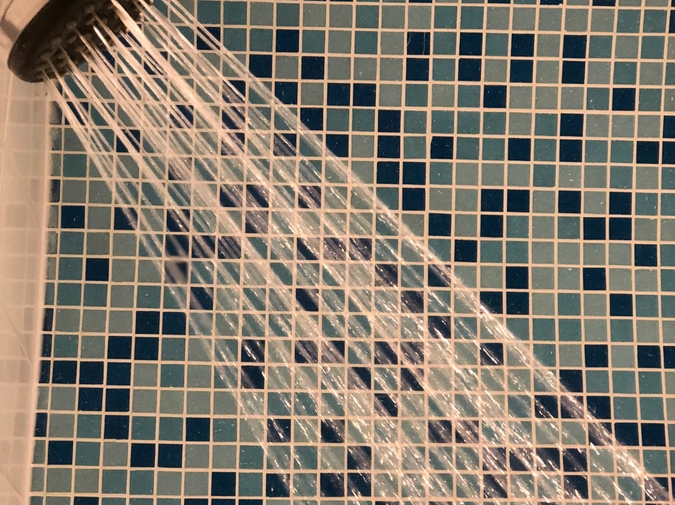 Every so often, while I sat in the doorway of the upstairs bathroom watching him shave, Dad said, “Hey Pooper? How about a shower with your old man?” The bathroom only had a tub. So we’d spiral down through the house, mother-naked, our bodies pulsing and spectral in the cool basement dim. Flicked our towels over the sawhorse near the shower stall. Magic yellow booth that rained inside. Our neutral zone, where Dad would not anger. I would not fear.

I stand back, wait for his exercise ritual before entry: fifty rapid jumping jacks, tallywacker a hummingbird wing. Click of the glass door behind us. Tribal yelps against icy water because Dad liked a wakeup before opening the hot spigot. The booth is crammed with one giant, one rail of a ten-year-old. Part of the fun, how we become of one skin. We roughhouse for position under the warming profusion. Dad lets me win then bullies me aside to brush his teeth up near the showerhead. Gargling noises, the toothbrush passed to me with a fresh white glob on the bristles. “Always brush your tongue, so your breath is kissing sweet,” he says, already preparing me for womankind. His hands frenzy the soap bar into a seething froth then work it through my mop top. I’m jostled under the waterfall. Lather snakes down between toes. My rinsed hair chirps it’s so clean. “Better than shampoo,” Dad says, kneading his own hair into a foamy soufflé. His baritone fills the chamber with pop song fragments. Bodies slip-slide, hip and elbow chaos, wet laughter. No shame. The stall creaks to our foot shuffle, a rolling ship on high seas. Far port reached, he disembarks first with a parting instruction: “Don’t forget to wash your bunghole, boy.”

Dad’s legato beer voice in banter with another.

Shadows licked the fogged door before it wings open sucking out steam. A strange man shoulders Dad, some yacht club friend by the RVYC coolie sheathing his can of beer. My back turns to them in appalled defense. This is betrayal. Dad narrates the features of his shower. Wants the man to see every inch of it. I know this when his hand vices my wrist. “Get out of the goddamned way!” he says through his teeth. I am ripped from the stall with such abrupt fury my soul remains behind. Near the sawhorse, my body stands a shivering husk, soap blind, feet together, hands cupped over hairless boyhood.

The man only feigns interest in the slip-resistant shower pan, the swiveling chrome nozzle. He palms the water texture with diplomacy. My father’s disjointed rage has shocked him—I’ve seen that look before. He no longer draws from his beer even as Dad tilts his own way up. Doesn’t swallow. Tricks open his throat so the liquid gurgles down and the can pops and buckles to the vacuum rush within. The man’s embarrassment, the aversion of his eyes, kindles my own. Dad finishes his spiel around the time my soul re-orientates to my body. He turns, and as if seeing me for the first time, as if I’m not standing stripped and humiliated, says to the man with supreme politeness: “Have you met my number one son?”

We hardly kept in touch once I moved west after college.

News of his illness came.

Same disease that brought down the Iron Horse of Yankee lore.

The continent shifted, tilted me back east.

Strange now to find us here, two men in the liquid murmur of many years past.

Dad festers on the shower bench, unable to stand for long anymore.

In the stall with him I feel smaller.

I wait for him to break song.

Wish for his fierceness, his danger, to return if it would make him strong again.

I chaperone his bathing, wash his hair while his arms dangle, then stand him under the showerhead. Side by side we look into the rain of our days. The magic booth compresses our history, our distance, our opened pores sweating bad blood the water cleanses away. Feel his hand like a delicate bird perch on my bare shoulder. I keep still so the bird won’t fly away. Cut the water. Our feet splat outside the stall, and on the rug they go silent, the way silence can allow grace. I hand him a towel and wonder at the great chasms and mountains one man can hold. The weight of the towel tires him quickly. He hands it back with an instruction: “Dry my legs, Pooper, and stay away from the fancy stuff.”

Chris J. Bahnsen is an assistant editor with Narrative Magazine. His work has appeared in The New York Times, Los Angeles Times, Smithsonian Air & Space, River Teeth, and Hippocampus. Ideally, he divides his time between Southern California and Northwest Ohio.