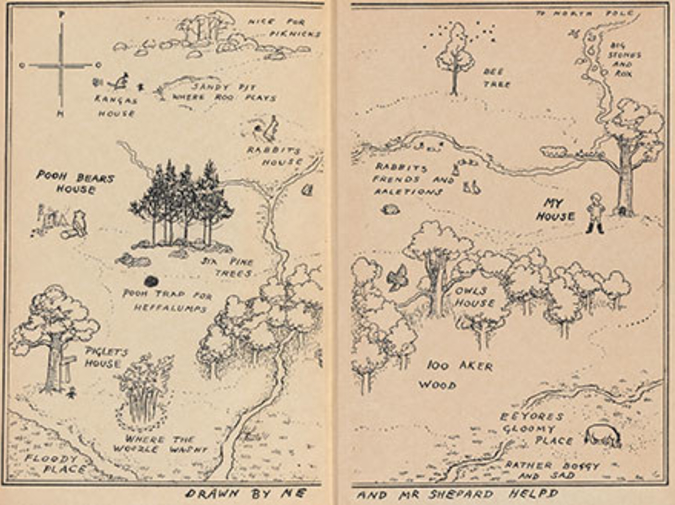 My first love affair was with Winnie-the-Pooh.

I was introduced to Pooh by my mother, who was introduced to him by her father. My mother was in love with Pooh too, but I think her love was more of a child’s love: for the sweet appearance of his rounded belly and for his entourage of adorable animals, all with distinct personalities.  And I believe she loved him because her father—an important man, editor of a major newspaper, with little time for domestic duties—read Winnie-the-Pooh to her at night. I think she liked Pooh’s words of wisdom and the lyrical sound of the language of his creator, A.A. Milne.  My mother was so enamored of him that Pooh became her nickname though college. Friends from her youth still called her Pooh into her old age.

Yes, my mother loved Pooh, but as far as I know her love was platonic.

Perhaps my affection began the same way my mother’s did. My mother was aloof and continually distracted, but when she read Winnie-the-Pooh to me at night, she was completely present. Her voice softened and took on a musical lilt.  I felt safe tucked into my covers, engulfed in my mother’s smells, as she rested her shoulders on the pillow beside me and assumed the voices of her Pooh and his beloved cohort.  My mother usually detested cuteness and baby talk.  Pooh was a toy animal, yet he spoke with wryness and wit. His observations were insightful.

Many years later, when my husband told me he would be making the trek to Cambridge University to work at Medical Research Council (LMB), I looked forward to joining him in the summer and seeing the original Pooh manuscripts held in Wren Library at Trinity College, a part of the university. I had to explain Pooh to my husband, a man of science, who grew up in the projects of Queens and had not read many children’s books. He was not impressed. How could he know what Pooh meant to me? I thought of how when my mother first met him, she compared him to Eeyore. It is true, that like Pooh’s friend, Eeyore, the solemn mule, my husband isn’t frivolous and doesn’t always receive wonderful news with any trace of cheer. My husband is no Eeyore; he has an absurdist sense of humor and a deep sensitivity. Still, he was not excited about the manuscripts and did not consider it a must-do. Why would he? Though I told him about the Winnie-the-Pooh stories, I did not tell him about the sexual arousal I had experienced because of Pooh.

We lived in a tiny two-story apartment above Jordan’s Yard, across from St. John’s Cathedral above an Indian Restaurant. While my husband worked during the day, I sat at the window, looked out at the cathedral and the passersby while writing—or I walked along the Cam or wandered the backs, where I was once chased by a giant white goose straight out of a fairy tale. Cambridge, itself, seemed the land of fables—the Bridge of Sighs, hidden gardens, winding paths, and old stone buildings that all resembled castles or Rapunzel’s tower. I somehow forgot about the A.A. Milne manuscripts until the first time I did our wash in the laundry room located in the bowels of Trinity College.

As I loaded my machine, I noted that despite a sign that said not to leave the machines “whilst in use,” half the machines were crammed and churning without a soul in view.  When I stood and looked around, I spotted a black eye peering at me from the porthole window of the machine next to mine. A section of a stuffed bear’s face—his round black eye and a fluffy ear—pressed against the thick glass. The image reminded me that despite their intellectual achievements and probable posh futures, the undergraduates at Cambridge were still barely young adults. It also reminded me that it might be a good time for my visit to the Wren Library for my rendezvous with Pooh.

The library was across two stately green courtyards (one of which was used in the set of Chariots of Fire). To go there, I needed to leave my machine “whilst in use.” As an outsider, I was aware that it was a privilege for me to have access to the campus and the laundry room, so more inclined to obey the rules than the students.

Rules or not, I knew the washing machines ran for fifty minutes

I took the stone paths skirting the greens to the library. Only Trinity fellows were permitted to cut across the finely manicured grass. I was the first to arrive when the library opened at noon, which was good since only fifteen visitors are permitted inside at a time.

The library was majestic, evoking in me a sense of awe. A long black and white glimmering checkerboard floor, flanked with high book shelves, led to an arched stained glass window from the eighteenth century at the far end.  White plaster busts of writers on plinths topped the shelves at the entrance to each aisle: Homer, Virgil, Spenser and Shakespeare. But there was only one writer that drew me that day.

The Pooh manuscript was kept in a wood-framed glass case just inside the front door. The original handwritten papers were placed beneath an early edition of the book opened to the same words of text, allowing for comparison. The story is the one in which Piglet, running to be the first to give Eeyore his birthday gift (a gigantic balloon bigger than Piglet, himself), trips and falls on the enormous balloon thus popping it with a loud BANG! In the manuscript the bang is followed by only a few exclamation marks. In the book, the number of exclamation marks is greater. I wondered if Milne made the changes or if an editor suggested them. I studied the flourishes with which Milne’s crossed his t’s, and the lovely E. Shepard  line drawings, and remembered the impact the illustrations had on me as a girl—how such simple sketches were evocative of  magical places where toy animals lived and talked.  I wondered if the library kept the manuscript and the book always turned to that episode, or if they switched it up from time to time.

I like the story of piglet and the balloon. I remember sympathizing with his anxiety and need to be the first to give his gift—and identifying with how his own greed had deprived him of the pleasure.

But the story that had the greatest impact on me is the one in which Pooh stuffs himself with honey in rabbit’s warren and grows too fat to crawl from the tight entry hole. He is stuck with his legs sticking straight out in the back and his paws dangling in the front. When I was five or six, I would ask my mother to read that part over and over. The way rabbit used Pooh’s stubby legs inside the warren, like pegs on a towel rack, draping them with steaming towels, excited me. As I listened, a strange sensation surged through my lower extremities—what Pooh might have called an odd hum. A physical awakening and excitement that made me want to arch my back. I felt also felt shame. The feeling seemed connected to peeing but oh, so much more pleasurable.

I loved how Robin and all the animals of the forest lined up at the warren’s entrance forming a chain to pull Pooh from the hole. The plugged hole—what would Freud say!

What would my mother say if she knew why I wanted to hear it over and over!

I had that feeling a few more times in my childhood, once in fourth grade when the girls were given the boys as slaves for the day as the result of the girls winning the spelling bee. My teacher, Ms. George, had to stop me when I got carried away with ordering my “slave” (what was that teacher thinking!) to do sets of push-ups on the black top. That same shameful exciting feeling. It was not for many years, until I was in my teens and mimicked sex with my boyfriend ( through our clothing) for the first that I realized that the fountain of tingling heat that started in my groin and shot up through my stomach and my flat little girl chest was sexual. An orgasm, perhaps with a slight tinge of sadism (the hot towels on Pooh’s legs and the forced push-ups.)  As Pooh said to Piglet about love, “You don't spell it, you feel it.”

When I returned to the laundry room, my wash was still spinning, and in the machine next to mine the stuffed bear’s fur continued to twist and blur against the dense glass, but his dark eye remained focused on me, as if he and I were eternally connected.

Garnett Kilberg Cohen nonfiction has appeared in The New Yorker, The Gettysburg Review, The Antioch Review, Witness, and The Rumpus and others, and has twice been awarded Notable Essay citations from Best American Essays. She has published three collections of short fiction and several of her stories have won awards, such as the Crazyhorse Fiction Prize and the Lawrence Foundation prize from Michigan Quarterly Review. She is a professor at Columbia College Chicago.