Little Johnny Damon Gets No Respect 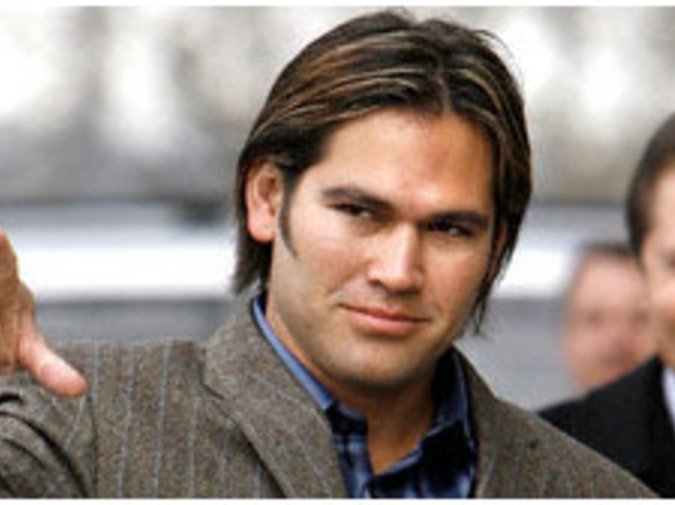 Little Johnny Damon enjoyed working in the produce section at Whole Foods. He took pleasure in stacking the lettuce and arranging the grapefruit and sweeping the dropped green beans from the floor. The job made him feel responsible and important and he liked that.

"Someday I will grow a beard like Jesus and women will think I'm hot," he'd tell himself while stacking radishes.

Little Johnny Damon had a lot of friends at Stop N' Shop. There was Kevin, Manuel, Derek, and Bill. They all got along really well. They called themselves the "dumb dumbs" on account that they did goofy things together and all flunked out of middle school. To pass the time they'd often make up stupid games, like Potato Bowling. They also took a lot of amphetamines.

Then one day he ran into his friend Alan who worked at Whole Foods. Alan told him working at the store was great.

"It is?" Little Johnny Damon asked.

So Little Johnny Damon quit his job at Stop N' Shop and went to work at Whole Foods.

When Little Johnny Damon first started working there, he would tell customers about his time at Stop N' Shop. He'd talk people's ears off about it, telling them how badly he was treated.

"They didn't respect me over there," he'd say, gesturing with a thumb.

"Why didn't the melon section respect you?" the customer would ask.

"No, I meant Stop N' Shop," he'd say. "I didn't mean to gesture at the melon section. I was just gesturing in a general sense, in a, you know, general 'over there' sense."

"Oh," the customer would reply.

"Anyway, they didn't respect me over there. Being respected is important to me, because in the end that's all you have: your respect. No amount of money or fancy cars or big houses matters if you're not respected. Plus their employee's discount sucked. It was the worst employee's discount the likes this world has ever seen. That's why when I grow up I'm going to grow a beard like Jesus and women will think I'm hot. You know what I mean?"

"Yes," the customer would answer.

Usually, the customers never knew what he meant, but they didn't want to listen to him anymore because he was very confusing and looked kind of like a retarded caveman, so they lied and told him they understood what he meant in hopes that the conversation would end shortly thereafter.

"They don't understand the concept of loyalty and togetherness at Stop N' Shop," he said one day to the vegetable section. "I would have stayed over there, but their employee's discount was horrible and I wanted to work some place where they understood loyalty and togetherness and so now, here I am. This place is very loyal and together. There is a rich tradition here unlike the world has ever seen. And the employee's discount is much better. For instance, cilantro, if I bought you at Stop N' Shop I'd be paying fifteen cents more a pound. Isn't that crazy? Yes, it is.

"And you, red leaf lettuce, do you know how much you’d cost at Stop N' Shop? You'd cost twenty-three cents more for me to buy with my employee's discount. How disrespectful is that? Very disrespectful."

"Shut up," the red leaf lettuce said. "Shut the fuck up."

Little Johnny Damon staggered back. Maybe red leaf lettuce did talk. Maybe that was something you learned in the eighth grade. He wished he had never flunked out of middle school.

Another voice chimed in; it was the kale. "Nobody cares about you and your self-esteem issues. Just shut up and stack us."

Little Johnny Damon did not know what to say. He hadn't felt so disrespected in all his life. Plus vegetables were yelling at him and it kind of freaked him out.

"Nobody cares about your plans for a Jesus beard or how women one day will think you're hot," the organic Romaine lettuce added. "You're a loser. You look like a retarded caveman and you're a loser. We spit on you."

"I don't understand what's happening," Little Johnny Damon cried. "Why do the vegetables hate me?"

The next morning Little Johnny Damon woke up, went straight to Stop N' Shop, and begged for his old job back. Unfortunately, there was no longer a job there for him to have; the new guy in produce was working out and he didn't take advantage of the employee's discount nearly as much.

So Little Johnny Damon returned to Whole Foods with his head hung low, knowing he had made an enormous mistake. There would be no Jesus beard. There would be no women thinking he was hot. In the end it would just be him. Him and the mean, talking vegetables forever telling him he fucking sucked.