Little Girls by the Side of the Pool 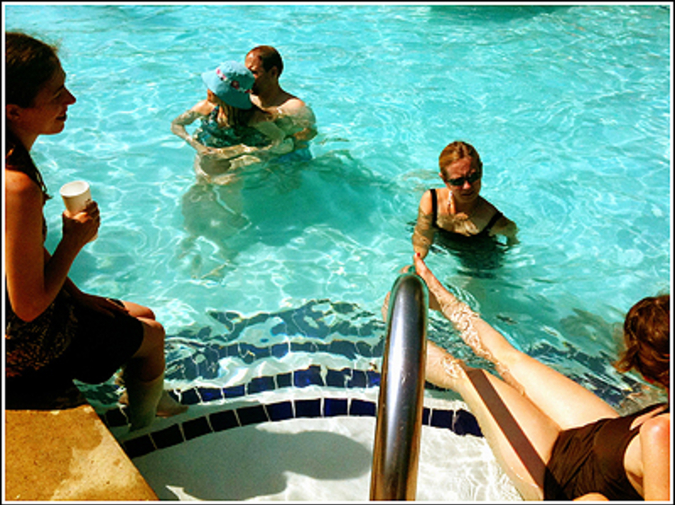 “Did you see what Suzy did when her father tossed her into the air?”

“She screamed. She screamed like a little piglet right until she hit the water.”

“My father is really good at tossing me into the water.”

“Yes, my father can toss me so high that I get afraid I'll never come down.”

“My father once threw me like ten feet out of the water and I did two cartwheels in the air before splashing.”

“My father once tossed me so high into the air that I was at eye level with the top of a tall tree and in that tree was a bird and that bird unfurled its wings and looked at me in a loving way, like a sister.”

“When I see you and your father in the pool he is not tossing you or throwing you. Rather, he is holding you under the water and you are trying to swim between his legs to twist him up or else clawing his knees, trying to reach the air.”

“Yes. My father is good at tossing, but he is also good at holding.”

“Does he hold you only in the water?”

“No. Many places. Sometimes I will walk into a room and his hand, laid on the armrest of his chair, will begin to twitch.”

“I hate all fathers. It is the way they touch you.”

“Their hands are swollen. When you are born they can carry you in their palm. You grow older and taller and yet their hands never shrink. When one wraps around your shoulder, the weight sinks down into your stomach.”

“And those hands, they can take control of you. You will be standing in the doorway to the kitchen and on the kitchen table is something wretched, some burnt meat, and in the chair at the table is someone wretched, some boy that has been invited over to talk to you, but who you already talk to in school and despise. Your mother has dressed you up too, in some blue dress that would look stupid even on a doll, and you are standing in the door frame about to retreat, to flee, back to your room where you cannot see or smell any of the wretched things in the kitchen, but just as you are about to turn the hand of your father appears on your shoulder and it moves through you, it pilots you and suddenly you are walking into the kitchen even though you didn't want to go into the kitchen—or maybe it is the dentist’s or a therapist’s office or piano lessons and the hand just appears there and wills you to enter, without the father even speaking, wills itself over the will of your own bones, forcing you into the room even though the hand itself does not move, does not even flinch.”

“But even so, those are also the hands that send you cartwheeling through the air above a body of water the exact color of Windex.”

“My father is not the only one who tosses me out of the water.”

“Oh? And who tosses you? Your filthy brothers?”

“Yes, my brothers. Tossing me together, one on each side, a leg and arm held in the hands by one, the other leg and other arm gripped in the fists of the other. They look at each other and then they count to a number while swinging me and then when they reach the number they release me. I never know what the number will be. That is part of the game. They tell me a number, but the number they tell me is never the number that occurs.”

“Brothers are even worse than fathers. Brothers are fathers in training. They carry a father around in their belly and the beard of this father irritates the walls of their stomach and this is the reason they are angry, all the time, when they see you.”

“I have noticed their hands twitching in a familiar way.”

“They are not the same hands as the hands of fathers, but they share the same hardness.”

“Well, my father and my brothers are not the only ones who toss me out of the water. Sometimes I will wait until the lifeguards rotate shifts and when Jimmy gets his turn to take a break, he will slide off his white tank top and pull off his red whistle. When I see him do this I slip into the water. I fill my lungs with as much air as I can and swim underwater from the deep end to the shallow end where Jimmy will be standing, leaning against the wall of the pool really, when I emerge. He does not say anything and I cannot look him in the eye. I look down at his stomach. The sun reflects off the mix of water and sunscreen on his chest in a way that hurts my eyes, yet makes me feel protected.”

“And then he tosses you out of the water?”

“Sometimes. If I open my eyes large enough.”

“He tosses you away.”

“I can only see his eyes vaguely behind the sunglasses. They are like two beautiful fish in the depths of a muddy lake.”

“They are different eyes when the sunglasses are off.”

“Sometimes Jimmy takes me to a place that is dark and he takes off his sunglasses with one hand while the other hand approaches me.”

“And these are the eyes you hate. The eyes that thin to the size of a knife when he approaches?”

“No, it is as if his eyes are clouds that have emptied themselves of rain.”

“Like a villain? Like some foreign villain in a cartoon show? His left hand stroking his thin early-pubescent mustache, his right held high in anger!”

“The way his eyes grab hold of you at the same time his hands do? The way his fingers tear into your shoulder blades as his eyes move closer—”

“No. Jimmy's hands go other places.”

“Those cold dead eyes that sting you like a handful of snow sliding down the back of your neck?”

“The eyes that are lit with a flame you do not want to recognize?”

“The way his eyes dart back and forth, looking at every point around you but at no point where you are, even as he bears down upon you?”

“It is the way he looks at me afterwards, in the light, with a great sadness...like a father.”

Lincoln Michel's work appears or is forthcoming in Tin House, Oxford American, NOON, Unsaid, The Believer, and elsewhere. He is a co-editor of Gigantic and the books editor of The Faster Times. He keeps a personal blog at lincolnmichel.com.