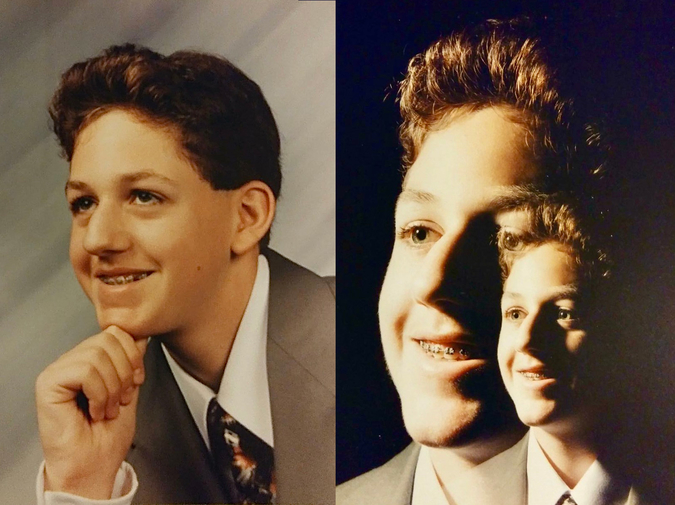 My brother got a stereo/cd player for his Bar Mitzvah and I, two years later, expected the same. I was so over my boombox, and my parents did not disappoint: a sleek silver Aiwa three-disc changer with two big speakers and two tape decks: the perfect mixtape machine.

What I did not have, however, were any cds.

And then: Chanukah. Eight days of presents, and on the first night, along with a few packs of Magic cards, was Dr. Dre’s The Chronic.

My parents came of age in the 1960s but supposedly, they’d never done drugs. I always kind of doubted this, due to the mythology of Woodstock and free love and all that stuff, and my mom saw The Doors in concert and my dad’s favorite album was Abbey Road. But I’m fairly certain she did not recognize the pot leaf emblazoned on the disc, nor had any idea what “chronic” was.

And of course, neither did I. Even for a skinny little Jewish kid from the suburbs, I was an exceptional dweeb. My Magic cards were the coolest thing about me. Any my penchant for hardcore rap, I guess. A few months earlier I’d purloined Bacdafucup by Onyx (on tape, of course) from the local video store (remember those places?), and listened to it incessantly. When my parents bought my brother that CD for the very same Chanukah, he couldn’t understand how I already knew all the words.

It wasn’t uncommon for young white boys from the suburbs to like gangsta rap in the early 90s – “Slam” was a huge hit at my Bar Mitzvah – but I can say with confidence that, despite having been born in the Bronx, we moved away when I was two and I had absolutely zero experience that related to what I was listening to, including most of the music that was being sampled (it would be some time before I knew about George Clinton, Zapp, or Sam & Dave).

What happened was that my only friend, with whom I grew up listening to Weird Al, The Beach Boys, and The Monkees, got really into Pearl Jam, Nirvana, and Led Zeppelin, and I didn’t. I stagnated. I didn’t leave my room, didn’t play sports, didn’t go ice skating with everyone else in my grade, I didn’t do shit. I watched Comedy Central and read the encyclopedia and played SimCity 2000 with a soundtrack indelibly etched into my brain: Snoop Dogg, Souls of Mischief, Lords of the Underground, Fu-Schnickens, 2pac.

I was horribly, intensely alone.

If I’m being honest, I was actually a little scandalized by the sheer amount of curse words in the songs – I actually felt guilty! – and I didn’t get the jokes, but I loved the bass lines, and though I’d never touched a girl and felt guilty about the ubiquitous misogyny, I was obsessed with the blurred-out tits in the “Nuthin’ but a ‘G’ Thang” video.

Perhaps the biggest thing about it was that I was a poseur, and I knew it. I sagged my jeans, so very low, though they weren’t “baggy” jeans per se—they were cut to be worn at my waist—and other guys in my school wore it the same way, as everyone did, and I when I saw them from behind I thought, Man, that looks so stupid, like they have a second butt under their butt, but I had no idea I looked exactly the same. Even to this day I feel very uncomfortable in clothes that actually fit me well.

The truth was, I didn’t have anyone to make mix tapes for, anyway.

But it could’ve been worse. I never pretended to drop gang signs and, even then, I knew uttering the N-word when singing along was verboten. Yet I sometimes long for the innocent love I had for those songs. I didn’t think about cultural appropriation or privilege – this was the early nineties – I just liked the music (it’s considered classic now for a reason, after all), and I remember listening to Onyx’s second album, All We Got Iz Us, on repeat while playing Doom II in the dark of my parents’ basement. The bullying and abuse I’d received for the first fourteen years of my life had created a stone carapace around my heart but also ossified my will—I couldn’t bring myself to do anything, out of fear. I didn’t understand the songs, for most of the part—but I did connect with the anger.

This was a few years before Columbine, and I remember fantasizing about coming to school and murdering all the bullies. I’d never actually seen or held a real firearm, and my fantasy was more about being a superhero with twin machine guns on my arms, and fighting evil villains, than it was about doing real violence to anyone. Yet I look back on it and think…I was close. I was so fucking close.

But things changed. I made some friends and it wasn’t long before I discovered William S. Burroughs and Dave Matthews and Phish, following in perhaps the most cliché white boy journey of all time, but by that point I was so knee-deep in misery and shame, it didn’t matter. If this was an essay about my first poem, I wouldn’t have the guts to write it. Eventually I even met a girl and made mixtapes for her, and I went to the mall and then to college—I did exactly what you would expect—and became obsessed with coolness, masculinity, identity, and premature ejaculation.

But The Chronic was always in my blood. (Literally, actually: I smoked a ton of weed in college.) And though I don’t know most of the hip hop artists out these days (for a while I thought Travis Scott was a country singer), if you’re cruising around Austin and you hear “Let Me Ride” blasting out of a dented 2010 Nissan Altima, it just might be me rolling by.

Phillip Scott Mandel is a writer and musician in Austin. He holds an MFA from Texas State University and his work has appeared in The Gettysburg Review, Passages North, The Boiler Journal, among others. He did the running man at his Bar Mitzvah.