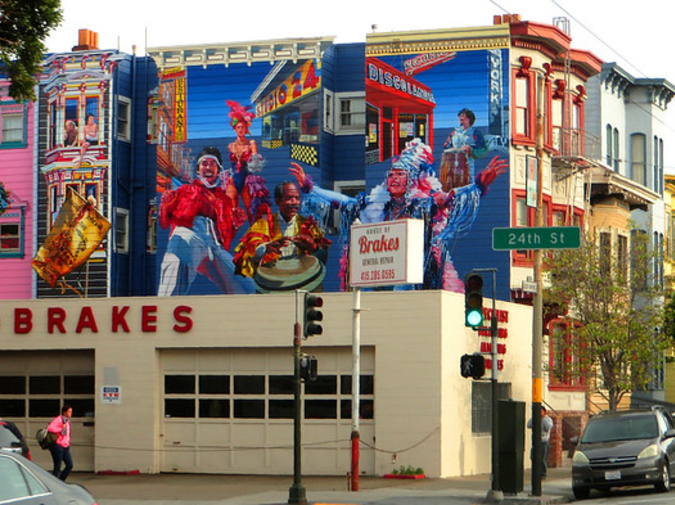 It was a sidewalk funeral. Golden bottles of cerveza stood, like glorified guests, around the pile of weeds in the center. Heaps of vibrant, wild plants that grew in between cracks on sidewalks and every place beauty shouldn’t be, all came together as a bouquet for her. And every now and then a man, who knew nothing of the tragedy, would marvel at the display, or sit, pop open a bottle and drink us empty, happy for the free booze. It was only we, who knew her, that could make out the cross, barbed wire looped together from a fence, engulfed in the weeds. Only we, who knew her as kids, who played beneath her watchful eye until fog or streetlights forced us inside. Only we whispered her name as we dropped anything we had to pay our respects. The ladies from the panderia dropped their end of day hardened conchas, the abuelas their virgin candles — everyone left a piece of themselves for her. I walked by with my favorite lipstick, and instead of laying it down, I wrote, until the crimson stick was a nub, here lies … the spirit of us all. And two hooded homeless men nodded in unison. One didn’t even have teeth left in this world. “She will be missed,” the skeleton said, signing the cross, backwards, as more homeless started to gather. Whether they had known her, or just knew what it was like to lose, it didn’t matter, we embraced them like our own.

If we had known she’d be gone, that one day, we’d wake to her absence, quiet and gaping, we could have said goodbye, the right way. We could have rung up our tios from the valley, the ones who slung fireworks from the back of Chevy Impala’s, year around, because there was always something to celebrate. Or, we could have blown the caps off soda bottles like we did that one year when even tios couldn’t afford fireworks, and we just wanted to make some noise, to say, “we’re still here.” We could have fired up the grill that we rarely clean, so the char on the carne asada always tastes like home. Watch as salty clouds of smoke dissolve into the sky, an invitation for familia from down the block to come by the freezing front porch for a plate and beer like a Happy Meal. Throw those corner store streamers everywhere — the reds and greens and white spheres of wrinkled goodness, string them on the light post, tape them to the neighbor’s house, throw them in the air like beads at Carnival. Blast the music so high that the old cranky tias come out in their robes and tell us to turn it down. Or better yet bring out the low riders—the OGs with their fat arms resting on glittered paint jobs, bobbing their heads to the bass we can feel in our hearts. Party like its 1999 or any other time, before now, where we are standing on the sidewalk, mourning over a pile of weeds in remembrance of her.

My winged eyeliner started to melt down my cheeks. “If only black tears could bring her back,” I exclaimed, and everyone seemed to be listening. The cholos leaned in close, and took off their SF hats and gold chains, tucked in their airbrushed 415 tall t-shirts, and bowed their heads. “She’ll be missed, for real,” they say, in a way that only we understand, dapping each other into embraces that end with loud sniffles, tears pressed into each other’s shoulders. But for once, no one cares who sees. The inmigrantes were hiding behind others, peaking between windows of bodies to quietly claim whatever space they could. Most, paying their respects in hushed whispers, shy, because they hadn’t been back to the street since the last time they could remember seeing her.

People rode along the street on their electrical scooters where the procession should have been. They were so close, that hot exhaust kicked up to our faces. We coughed and spat but swallowed our curses as they sped by. Soon, the sky was a dusty dark cloud, and fog made our ears ache. There were only a few of us left. The virgin candles were a mere flash of light, illuminating our shadowed bodies. I looked around and realized there were no children. At least none like us, our brown faces like those faded murals that even without her, remained. Childhood beat proud in our chests. Our dearly departed was in our memory. We shared stories of youth—stories of etching our names in sidewalks in front of our abuela’s houses, of dancing in the street at block parties, of that one kid, from down the block, with the community Nintendo 64, of front doors that stayed open, of every memory that was ours. We laughed, cried, and laughed until the sound rattled through all the houses where we once lived. I cleared my throat. Someone should say a few final words. It was getting late. Soon the street would be as quiet as it was before we all returned. Before I could speak, a man raised his 40 to the sky and poured until the gold fountain splashed and sizzled the candles out. I couldn’t have said it better myself. It was over. She was gone.

I came back the next day and where there had been bottles, there were just a few shards of glass. The wildflowers were all stomped out, pushed back between cracks of cement where they belonged. All that remained were three lines, written so big on the cement, she’d surely be able to see it, wherever she was now. First, in broken graffiti, spray painted in giant, loopy letters. Then, written in crimson red lipstick, like blood, so even they couldn’t touch it:

Here lies The Mission, the spirit of us all.

Olivia Peña is a Black-Salvadoran writer and storyteller from the Mission District of San Francisco. She earned her MFA from the University of San Francisco. Her writing has been supported by the Tin House Summer Workshop and her work has appeared in PANK Magazine and The Acentos Review. You can find her on Twitter @Oliviapenya.