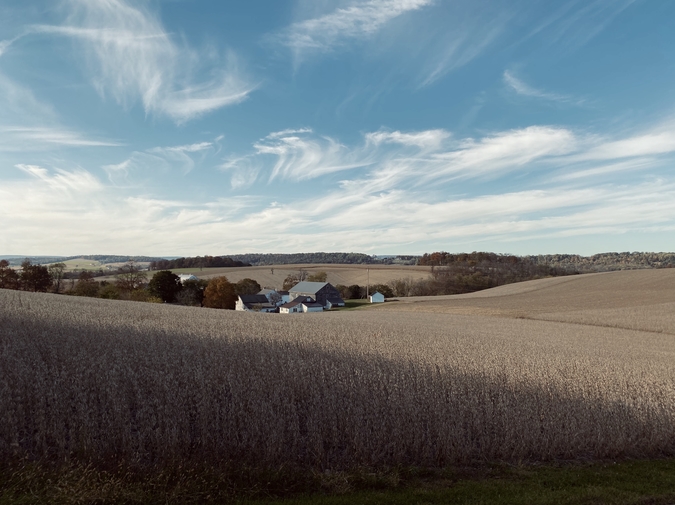 Moths are burning in the porch light. It’s a chilly night for August, and I’m already wishing I’d brought a cardigan as my key turns in the lock. The DeJulio sisters are waiting in the driveway for me to come out. I’ve warned them not to honk. It’s nine o’clock, and Mom and Dad are already in bed. No curfew tonight because it’s a Friday in summer, and my parents have made the mistake of trusting me to make good decisions.

Melissa and I are in the same grade. Two weeks until we start junior year, I think glumly, my stomach clenching as I climb into the backseat. She’s sitting shotgun. A few months ago, she’d dyed hair cerulean blue, but now it’s faded to a swampy green. Her hair is cut short, and tonight, she’s wrestled it into two tiny pigtails, accented with the plastic Goody barrettes we wore as little girls and are wearing again at sixteen.

Summer is dying in broad strokes now––the sky has gone plummy and all the fields are filled with overgrown corn. Kelly, Melissa’s older sister, is driving. She’s freshly graduated from high school and off to university in Plymouth, England. Why? Because it’s as fucking far away as she can get from our small Ohio town.

“Wadsworth, Ohio,” we used to deadpan as we drove around aimlessly, filling Kelly’s Toyota Tercel with smoke from our clove cigarettes, “Nothing to do since 1814.” But tonight there is something to do. One of the older guys Kelly works with at Kentucky Fried Chicken knows another guy who’s throwing a party. First, we cruise to Waffle House. “We can’t show up too early,” Kelly explains. Melissa and I blink dumbly back at her. We’ve sat in pot smoke-filled basements, watching boys play video games, and I’ve sipped wine with my parents on special occasions, but neither of us have been to an actual party before.

We’re not regulars at the Waffle House, but the waitress with permed, puffy hair and too much blue eye shadow still calls us all “sweetie” anyway. We take over a corner booth, and I order hash browns, scattered all the way, and a cup of coffee, so I can stay up late. I spoon ice cubes from my water glass to get the black sludge to cool faster—a trick I learned from my grandmother. She’s withering away in a nursing home now.

“Amy and Jen are gonna meet us there,” Kelly says, looking up from her Razr flip phone. With Kelly, Amy, and Jen, I feel strange—both older and younger at the same time, if that can be possible. It’s a thrill when they include Melissa and me, but I always realize how little I know, how sheltered I’ve been. They’re getting out of this town in a few weeks, off to big cities like Cincinnati or Columbus. Kelly has begun to pack for Plymouth. “I just don’t understand why you have to go so far away,” Mrs. DeJulio keeps saying, her eyes sad, reminding Kelly that she won’t have a car over there, that she’ll have to leave almost everything in her bedroom behind, that she’ll be entirely alone. As if that wasn’t the point.

Earlier this summer, I’d gone shopping at the mall with Kelly and Amy. We scarfed down massive, grease-saturated slices of pizza in the food court. We doused ourselves in Love Spell body spray at Victoria’s Secret, and Kelly and Amy bought lacey thongs. They dug through racks of bejeweled dresses and slinky tops at Wet Seal and Express, hunting for “going out” clothes. I’d struggled into a pair of low-rise dark jeans with large white stitching. Even in the dimly lit dressing room, I could tell I looked ridiculous. I felt like my internal organs were being squashed, and I regretted devouring that slice of pizza so quickly. I didn’t bother to model the pants for the girls, emerging from the dressing room empty-handed. I knew—a mix of sadness and acceptance—that I’d never be the kind of girl who could be comfortable in jeans like that.

Tonight, I’m wearing a vintage Victorian-style dress, the lace on its high collar scratching my throat. Melissa’s in her usual t-shirt and jeans, a more appropriate outfit for where we’re going. The party is in Doylestown, a nearby village with one stoplight. In the 1800s, it was a coal mining town named Rogues Hollow. Its residents worked dangerous jobs and lived notoriously rough lives. Convinced it’s a haunted place, we spend late nights on weekends waiting for a ghost child’s wails at Crybaby Bridge. We blow through the Devil’s Triangle, an intersection where three stop signs form a triangle on a steep hill. Do it six times and you’ll summon a demon. Or just get carsick.

But tonight, we aren’t searching for a ghost train with a headless conductor. Kelly winds through the back roads, careful not to startle any deer, and she pulls into a long driveway, up to the largest house I’ve ever seen in person. There’s even a small lake with a pontoon boat in the sprawling front yard. Raucous laugher spills from the garage, where a small crowd has gathered. Kelly spots her coworker, Adam, a barrel-chested guy in cargo shorts who’s double-fisting cans of Keystone Light. He’s probably only six or seven years older than me, but at my age, that gap seems more like a canyon.

“You made it!” He says, embracing Kelly for just a moment too long. Melissa and I exchange glances.

“She only hangs out with him because he can buy alcohol,” she whispers to me.

“Whose house is this?” I ask. Mosquitoes land on my arms, and I swat them away.

“My buddy Nick’s. His parents are in Cancun,” Adam says. “Let’s get you all something to drink.” We follow him into the garage. Amy and Jen are playing beer pong, their eyes already glassy.

“There’s Jungle Juice in that jug over there,” he tells us. Kelly sticks to beer because she’s driving, but Melissa fills a cup. I’ve been warned about drinks like that—sweet punch masking the lethal combination of cheap vodka, gin, tequila, and rum. I decide that straight vodka is the better choice, so I grab a bottle of Smirnoff and pour two shots into a solo cup. It burns when I sip it, but my body feels warm.

“You’re hardcore,” Adam says approvingly, but I’m really just inexperienced. Melissa and I watch as he and Kelly face off against Amy and Jen in a game of beer pong. I think Amy and Jen are losing on purpose.

“That’s so gross,” I say as the pong ball rolls across the filthy floor of the garage.

“That’s what the rinse cup is for,” Melissa says with a shrug. She finishes her punch and refills her cup. I down the rest of my vodka, trying not to shiver.

“Do you want to play?” Adam asks, but I shake my head, no. His voice is booming, and his jokes are stupid. The more Melissa and I drink, the funnier they become. He asks us what grade we’re in, what books we like to read. He doesn’t really listen to our answers; he’s staring at Kelly. He says he likes Bukowski, and I elbow Melissa in the ribs. Red flag.

“Can I have a cigarette?” I ask, but every time Melissa hands me one from her pack, I drop it. We giggle, and I gather them up, tripping a little on the hem of my dress.

“You’re kind of drunk,” she says, pointing at me.

“So are you.” We smash our red cups together.

Nick, the party host, introduces himself to us, but he loses interest when we tell him how old we are. We’re the youngest people here, and I feel a little like I’m at the kids’ table at a family gathering. A group of guys, playing darts on the other side of the garage, leers at us. We turn our backs to them. They look so old. Some of them are even balding like my dad. I thought I wanted to be noticed, but these guys are just a bunch of creeps, and I hate how their eyes feel, flicking up and down my body.

“Girls!” Amy drapes her arms over Melissa and me, drawing us in conspiratorially. She smells sweet, like candy, but flammable. “Those guys over there keep checking you out. Get drunk and fuck something!” She doubles over in laughter, spilling her drink. Melissa and I don’t bother to tell her that we’re still virgins. We’ve had sloppy make-out sessions with heavy-breathing nerds, but that’s about it. Jen’s already hooking up with a guy inside. At one party in June, she’d had sex with a migrant worker on the kitchen floor while everyone watched. “That’s just what Jen does,” Kelly had explained. “Does she like the guys?” I’d asked. Kelly had just laughed.

As I down more vodka, I imagine walking up to one of the dart-players and pulling him away from the game, leading him into one of the mansion’s many bedrooms and closing the door behind me. What would it feel like to crush my body against his, to let him do whatever he wanted to me? To touch him, knowing I’d never have to see him again? I could fuck him without even learning his name. I’m excited at the thought, even though the dart players repulse me—probably because they repulse me.

“We should probably get going,” Kelly says. “Melissa’s shit-faced.” We peel her away from a game of Flip Cup. She and I sit in the backseat together, sharing a cigarette, a Turkish Jade. Kelly’s quiet in the front seat. Maybe she’s planning how she’ll sneak Melissa into the house without waking their parents. Maybe she’s tallying the days until her departure. Her iPod is hooked up to her stereo through an adapter, but the music always sounds staticky and far away, like a transatlantic phone call. She’s playing “I Know It’s Over” by the Smiths, a dirge we all know by heart. Melissa and I start crying, quietly, as Morrissey sings. It’s not just the song, so what is it? The vodka? The knowledge that so few nights like these remain?

I want the Tercel to slow down, for time to stretch and bend. In one month, Kelly will be in England, and the car will be permanently parked in the DeJulios’ driveway. Melissa and I will be back at school, shuffling from class to class in hallways that smell like eraser shavings and hot dog water. On Friday nights, we’ll haunt the Waffle House or the 24-hour Wal Mart, just killing time until curfew. We’ll feel the heft of Kelly’s absence and miss her fiercely, envying her even when she instant messages us to say that she’s homesick, that she cries almost every night, that the food is terrible. We’ll mail her boxes of Kraft Macaroni and Cheese and mix CDs. We’ll dream about visiting her, how small Ohio will look from our vantage point in a plane.

We race past dairy farms and over train tracks. I roll down my window, inhale the scent of burning leaves. Bats collide in the sky above us. Melissa’s eyes are closed, and I don’t know if she’s sleeping or if she’s about to puke. It hasn’t been a great night, but I still wish it wouldn’t end. I want to linger––just a little longer––in this awkward body, on this lonely stretch of road, sitting with the taste of my tears and stale vodka.

Kat Saunders lives in Cuyahoga Falls, Ohio, where she works as the assistant editor at Kent State University Press. Her essays have appeared in the Los Angeles Review, Harpur Palate, Cleaver, and other publications. She's currently working on a memoir-in-essays about her adolescence in Rust Belt Ohio.