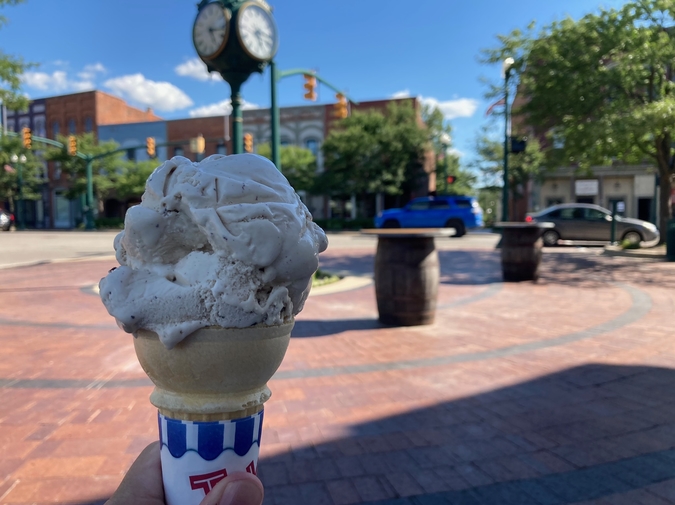 My best friend was Jonathan Ben-Porat. We were in 5th grade and he was still a thumb sucker.

I’d always sit on the carpet next to Jonathan so that I could reach over and pull his thumb out of his mouth, even though he’d always put it right back in.

Until one time our teacher made us sit apart, so I wasn’t there to help him.

He sat on his thumb.

Our teacher asked us what we wanted to be when we grew up. One girl said I want to rap with 50 Cent. I was thinking “he’ll be an old man by the time you’re old enough to do that.”

When she stopped talking I checked up on Jonathan. He had his damn thumb in his mouth again.

So I made a vow, right then and there—one day I was going to throw Jonathan on my back and run so fast we’d both become men.

I was chubby and was miserable and Jonathan was obese and happy. He was the most comfortable boy in the world and I was the least comfortable. That’s why we were such a good team.

He wore sweatpants and I wore jeans. He said you have to wear pants that move with your tummy.

Whenever Jonathan came over for dinner he’d always get a stomachache. My mom would drop off two big plates of Ortega tacos and he’d wait for her to go back into the kitchen and then whisper to me: lets have a taco-eating contest. He’d get this crazed smile like he wanted dangerous things.

We were rich Jewish kids who needed to make trouble where no trouble was around.

So every time Jonathan came over for dinner we had a taco-eating contest. And every time he’d win.

By the time we’d finished, by the time we had opened up the pull-out couch and were laying together playing Mario Tennis against the backdrop of a sunset going down behind the Statue of Liberty, he would always have developed some kind of serious indigestion.

So I would take care of him—I would go into our medicine cabinet and get all the things my mom got for me whenever I needed help. First I fed him two Advil’s and then I handed him a cup of Pepto-Bismol and said “here you go Jonathan, drink this and you’ll feel better," and he would.

Jonathan would drink the Pepto-Bismol and then lick the pink off his lips.

This went on for a long time, until Jonathan blew our cover. One day he asked his mom if she could get him some Pepto-Bismol because he wanted it as a snack.

Here’s the e-mail my mom received from Jonathan’s mom after our last Pepto night together:

Your son is not a doctor. Please don’t let him medicate my child.

Smadar was an Israeli housewife. She made the food, made the house, jerked off her husband, and bought Jonathan all the DVDs he ever wanted.

She also had pink nail extensions. This isn’t the kind of thing I could ever know for sure, but it felt to me like her fingernails were the last part left of her old life.

In lower Manhattan it felt like all the Jewish mothers were in two kinds of competition with each other: for the glory of their nails and the success of their children.

Sometimes I’d go with my mom to get her nails done. I’d sit by the door eating miniature tootsie rolls from a jar while a Vietnamese woman put sponges between my mom’s toes and held them close.

My mom would always read a magazine when she was getting her toes done. I think she was embarrassed that her toes were the center of someone’s universe, even for just a moment.

When she was done she’d come over and put her hands between two layers of marble where cold air was circulating just to dry her nails.

The manicurist would say “he eats very good”, and point to me and to the big pile of leaves next to me that was actually just tootsie roll wrappers, and then they would laugh at me. I suppose sometimes women have more in common with each other than they do with their own children, even if they’re strangers.

One time my mom whispered a secret into the manicurist’s ear and the two of them laughed. I don’t know what she said exactly, but I bet it had to do with my mom’s recent retirement.

She had just retired from wiping my ass.

For my seventh birthday my mom and I went to Disneyland. She’d always told me when I turned seven she’d be done wiping for good, but I thought she was just bluffing—I never really believed her. So first thing when we got to the hotel room I did my business and called out to her.

So I sat there, looking into the toilet, worried that I might not be able to do it alone. I said “but I’m on vacation.”

That’s how I learned there’s no such thing as a real vacation.

The next time Jonathan and I had a playdate I told him what had happened. I was sitting on his bed and he was sitting at his desk when he told me a secret.

He told me that if I ever needed to go I could go at his house, that his mom would wipe my ass.

I could just yell “I’m ready Smadar!” from the toilet seat and she would say “I’m coming, Sam.” She would turn off the kitchen tap, wipe her hands on the dishtowel, and then her pink nails would just appear around my side of the bathroom door.

She would bend over and tear off just the right amount of squares. She’d get on her knees and say in an almost whisper, sit up a little dear. And then I would close my eyes, because I, too, would be getting my nails done.

But there’s a catch, he said. He put his feet up on his desk and folded his hands together.

No more pulling my thumb out of my mouth, no more alpha shit. From now on, the only person you’re allowed to bully is yourself.

So I hung my head low. I whispered ok.

He said what was that.

So I said it again, but this time I said it louder.

He opened his closet and took something from his dresser. When he turned around I could see that he was holding up a pair of sweatpants.

He said these are yours now.

Sam Fishman is a writer in Los Angeles. You can read his work in Expat Press or The Nervous Breakdown.