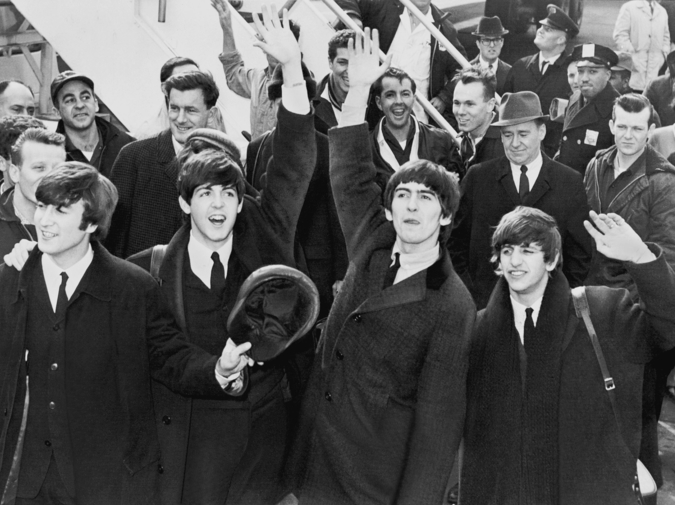 Lights go dark, cut out, and settle into the kind of epic silence that would only come before fucking Black Sabbath are set to take the stage. Everybody around me jazzed. A palpable hush that’s so thick people are likely to flip their lids. Nobody knows what’s to happen next. And that’s very very intoxicating. I don’t even need more drugs. Okay, maybe a little bit of coke.

Fog pours out of the smoke machine. Or is it smoke from the fog? Out amongst us, the people, filling the ether, the space between until we’re all covered in a thin haze. A voice comes through the speakers, lo-fi with the white noise rattle of a very old recording turned up louder than it has any right to be. Is that Ed Sullivan?

“England. September of 1963 we first heard the Beatles and signed them right there on the spot. Ringo Starr, Paul McCartney, John Lennon and George Harrison.”

The flash of white strobe lights hitting the stage in one smoothly executed movement is followed by a single scream from somewhere in the audience. More of a hoot really, breaking the tension, causing some to laugh and others to tense up in even more excitement. I peer over heads looking for the source, but just see a sea of hats and hair. A long drawn out pause before Ed Sullivan continues: “Ladies and Gentlemen, The Beatles.”

Lights up. Everybody screams, hands to cheeks, doing their best impression of the teenage girls on the loose in 1964 New York City. Four DJs: Love Language, TimeCop, Trevor and Paul McCartney II step out on stage in full Sgt. Pepper’s regalia and I can’t help but throw errant thoughts away and let myself be taken over by the moment.

“Woo! Yeah!,” I scream at the top of my lungs, even adding a “Hell Yeah!” for good measure.

The foursome step to the decks waving—royal, cupped hands—before dropping in on a remix of Lucy in the Sky with Diamonds. Jealous of those high on LSD as they picture themselves on a boat on a river, with tangerine trees and marmalade skies. The couple next to me in particular have their eyes closed in what I can only imagine is a head full of gorgeous hallucinations based on the dumbstruck smiles on their faces.

Blackbird singing in the dead of night take these broken wings and learn to fly fly fly fly untz untz untz. The drum breaks from Come Together laid out into a consistent four on the floor beat, an anthem that could be played at every sporting event from here on eternity. We scream about being able to work it out, getting by with a little help from our friends, and how our troubles felt so far away, yesterday.

Grab a brother or sister next to me—don’t even look—swaying in perfect accompaniment to the horn-driven repetition of love love love, building a beat with a fresh slap of Trevor’s all too familiar sound design and we all believe for one simple, uncomplicated moment that truly, all you need is love. All together now.

Awestruck, mouth agape, dazed and confused on a psychedelic journey through hit after hit from the band that those without any discerning taste cite as their favorite. That’s because, I guess, as is revealed to us over the course of these sacred 120 minutes, they really are the best there ever was.

Or does this extremely curated set of house versions give that title over to these DJs instead? Who gets credit? Curator or innovator? Reinventor or originator? Ain’t that the charm of the remix?

Time slips by and the minute hands start to not stretch as slowly anymore. Nervous feet patter as people check cell phones and watches confirming sneaking suspicions that this paradise is not long for. Ten minutes remain, as they kick into Here Comes the Sun, stripped down to its original elements and just left alone to play as is. It’s beautiful, sweeping, and though the sun is long gone, we can feel its warmth encompassing us.

The song fades out and there’s a pause. A brief interim of silence. Oh no, is that it? It can’t! It mustn’t be! The show literally fuckin has to go on.

The vocals come back before any instrumentation, rip-roaring out of the speakers like they’re being howled through the microphone at the edge of the known universe. “When I get to the bottom, I go back to the top of the slide. Where I stop and I turn and I go for a ride til I get to the bottom and I see you again.”

Boom, back into the drums and we’re all jumping and bouncing, laughing, and landing, on top of each other and not minding in the goddamn least.

When they finish and the song cuts out as suddenly as it came in, we all collapse to the ground. 5,000 people in the world’s most geeked up cuddle puddle, rolling around in the dirt, like one 20,000 limbed animal loving every second of it.

Love Language lifts the microphone, and in his best attempt at a British accent says “Thank You America, Good Night!” Boom! The Helter Skelter (Drum & Bass Remix) ramps back up for one last drop. We leap to our feet, and shake it out for the track’s final spin.

The boys leave the stage, and we stand, shook, unable to compose ourselves. Faces completely melted off of skeleton and muscle and skin. Piles of the artist formerly known as face oozing below our feet. Okay, now what?

KKUURRTT is glad you read his thing. His novel GOOD AT DRUGS is out on Back Patio Press. He can be found on twitter at @wwwkurtcom.