It's Just A Flower 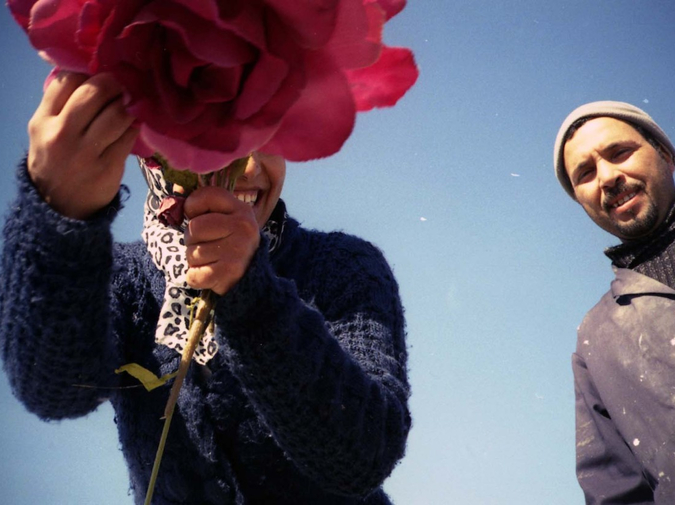 Garden centre romance does exist. You really can feel adoration and prickly physical urges as you saunter between greenhouses and walkways lined with plastic pots. And plants can make you feel all dizzy and hopeful. A respite, especially where we live.

Casablanca. City of steaming tempers and gulping fumes. Hub of disapproving voices condemning a surname, an origin, with a sharp flick of the tongue. Stupid names. Small collections of letters that fucked up us. Names that carry ill-remembered histories of now-irrelevant tribes, that our families (yours in particular, being so prestigious) still clutch at. That preoccupation with being the best Moroccan dynasty, some vain clasp at glory.

So you and I and our mismatched names went to the garden centre. Went to that slightly crappy place on the hideous dual carriageway to buy two plants in two pots. There, where nobody knew us, we brushed against each other behind the baby palms, tickled one another’s fingertips as the hibiscus glared red.

Initially it was an act of gratitude, getting those plants. A present to say Thank you, Sophia, for everything. For ridiculing the your-surname-defines-you tenet. For making herself scarce just when negotiating our spats. Convincing one to stay, cajoling the other into calm. Who does that?

Sophia knows how to handle puerile people who live off bloated pride, floating them down softly onto a cloud, from their highchairs, into something a little more…reasonable. She also knows what love looks like when it’s real. And for Sophia, any real love is worth nurturance.

We’d stood like rainy-day kids at my yellow window, dust of rust falling from the frame. Pondering the thank you gift, scratching for inspiration, flopping gazes over the traffic exhaust and the staring exhaustion of people.

Casablancans. So dead from repression and judgement, from the pace and angry tension of too-much-sound. Irate streets grumble-growled beneath us, people heaving around their invisible names.

You said it didn’t matter.

I said it didn’t matter.

“We need a gift that’s really her,” I said. “Really Sophia.”

“Could you define her?”

“A truly independent mind, a renovator, a cultivator.”

“That’s it.” You tipped your forehead onto mine. “The opposite of us.” We laughed but it ended up being the truth.

So, garden centre romance it was, for us. Felt like one of those beautifully normal things to do. An ambling, hourless afternoon. We mumbled banal, repetitious stuff.

“Oh those with the yellow buds are nice.”

“I like that one with the tiny indigo flowers– smells just gorgeous!”

“You’re the one that smells gorgeous,” I still remember you saying.

We didn’t know many plant names. We asked the bored girl who had her phone stuck against her ear with her headscarf, listening to something long and chanty.

She adjusted the phone closer to her ear. Tightened the knot at her neck. We dawdled off. Giggles, complicity. It was fun and warm.

“Casablanca is bad to flora,” Sophia said. “Cities like ours are full of people who don’t know plant names. Barely anything grows.”

True. There are places where it’s hard to grow. Where nature is a scary stranger. Where people see soil as dirty, animals as threats, petals and pollen as magnets to nasty insects.

Even with all the sunshine necessary for photosynthesis, humidity so prevalent that the heat is no threat to hydration, soft wind for pollination--even with all that--growing is so hard.

Sophia says the air is so gunged with filth that life just withers. All those miniscule particles of carbon scratch at leaves, like shrieking, malicious vermin. Scratching them open, inviting infection, sickeningly wounded soldiers in pits. What did she call it again? A chlorophyllic catastrophe. Ha!

So hostile is the city to plants, that there are none. And once there are no plants, people don’t miss them. They have cars, malls, and drive-thrus. Sophia says this as she clips dead leaves, caresses sprouting shoots that jungle over her flat. She flutters around misting her indoor garden until it drenches us with the smell of joyful verdure.

That’s her. All harmony and life and so on and et cetera. You and I, though, Big Fail in that department. I felt the change in you. Those early avoidances, disappearances, cuts in contact.

“If something’s changed for you, tell me.”

Sophia was wearing a blue skirt, long as the sky, the kind nobody wears. She wasn’t expecting potted stephanotis, let alone two of them, elated white blooms blowing smog-thick scent.

Let me call it reverie, ardour and also something very real.

You: My grail, my wonder, my castle in the air.

Why did it end?

Because everything has an end.

Your fault. You bottled, slid away, lied. Sided with your name while smiling at me.

I could tell. Maybe I’d have understood, had you explained. Admitted your name was too important to abandon. That the forbidden scenario was too frightening in the long run.

But guess what? Even in the forbidden, there are rules. One rule: don’t pretend.

Call it an act of final retribution, what I did. Because we’d bought them together, the two matching stephanotis. His and hers, she and he, me and….

I was happy to look after Sophia’s flat while she was away–-anything for her. Happy to change cat litter, pay the cleaner and play sentry to the plumber. Happy to tend to her plants, I really was.

But the stephanotis, I couldn’t do it. I let them wilt slowly away. Passive revenge. I confess to enjoying it a bit.

I know it’s small and sad and acerbic. Perhaps unfair.

Olivia Gunning's fiction has been published or is forthcoming in The Forge Literary Magazine, Pithead Chapel, Crack the Spine, Five on the Fifth and STORGY among others. She left her native London years and years ago to write, teach and live in Casablanca, Morocco. As a journalist, Olivia has written for Fodor's Travel Guide, The National, and Elle Decoration as well as several travel supplements.