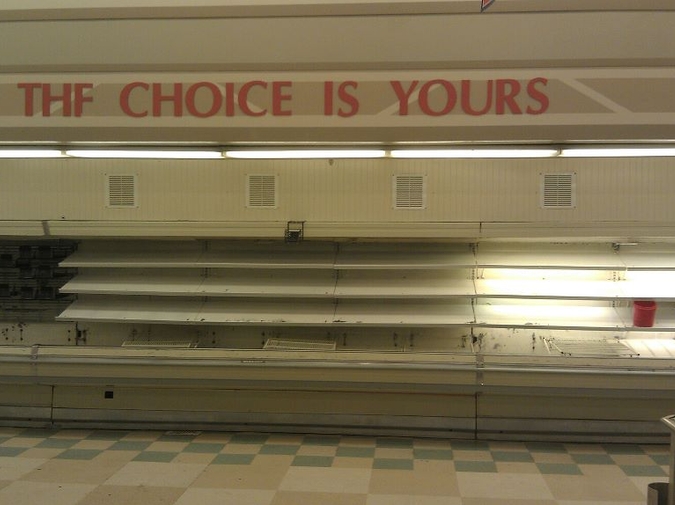 He was her first virgin, and he waited to do it in a bed. He came on her stomach and when she got back from the bathroom he looked like he had cried or would be crying soon enough. He left the room without saying anything and she looked around, at the pack of untouched cigarettes on the dresser, at the tapes arranged in perfect rows on his desk, at the tooth-colored venetian blinds. She was still looking at the blinds when he came back with two bowls of ice cream and handed one to her. Eat up, he said.

He is nineteen. His name is James. None of this matters, really. He is working his first real job and she’s already had seven. He met her when he came into the pancake house where she worked, sat at the counter and ordered coffee. It’s not the kind of place where you can sit at a counter and hope to talk to anyone, but she talked to him. He asked her out and they met in the parking lot when she got off at eight, the sky streaky with some bright behind thing, like the foil on a lottery card.

Her name is Janet. She is twenty. She has lived in this town her whole life, a place at the bottom of a medium-sized city, a few miles away from an Interstate that leads to bigger cities to the north and south, and maybe she would have hitched a ride and gone north or south if she hadn’t known all about what happened to girls who hitched rides on the Interstate. That was her mother’s warning for her: Stay close to home, or you’ll end up like one of those girls who hitch rides on the Interstate. So she stayed.

She knew what happened to girls who hitched rides on the Interstate, because her sister had been one of them. This is a story she also hasn’t told the boy, partly because it isn’t true, though she thought it was until a year or so ago. One morning her sister left the house and hitched a ride on the Interstate, and her mother told her the I-5 Killer had got her. The I-5 killer was on the news every day: he picked girls up and shot them, but first he put his penis in their mouths. Did Janet want that?

One day a woman sits down at the counter and orders a piece of lemon sour cream pie and a cup of coffee, and when Janet comes over to give her a refill she recognizes not her sister but herself. The same rabbity flaring of the nose, same child-looking hands, same blond hair the colorless color the Clairol boxes called ash. When they were little their mother would take them to the Sav-On and hold boxes of hair dye up against their hair until she found a match, then go home and dye herself to match her two young daughters.

When Janet’s sister came back, they went out and sat in the parking lot and smoked menthols from Janet’s pack.

She said the I-5 Killer got you, Janet said.

The sister only smiled, weak as skim milk.

Janet thought of asking: Why did you leave me? Where did you go? Is it far? Is it better? Do you live on the beach? Did you meet the I-5 Killer and make him love you, and did he take you to LA and give you the jewelry he took from all the dead girls?

She asked: Where did you get that sweater?

It’s a story she hasn’t told him yet because she told it to her last boyfriend, and the one before that, and she isn’t smart but she knows enough to stop doing something that never does any good. After she told the last one he went to the bathroom and got some water, drank it, and threw the glass against the wall. She heard the glass breaking but didn’t come in for five more minutes, when she saw he had taken a piece and driven it into his chest. I’m sorry, he said, and she drove him to the hospital.

The one before that was better—didn’t decide to hurt himself like it would make her feel better, didn’t start calling her at strange hours. But he stopped touching her—they all stop touching her. The one before that nodded and said, Too bad, and she said, Yeah, well, it happens to a lot of girls, and he said, What the fuck are you trying to say, exactly? The next time she came over she tried to give him a blow job and he pushed her away, went into the bathroom and jerked off. They all go into the bathroom.

She was twelve when it started, which isn’t that young, she’s decided. Twelve year old girls go missing all the time, run away from home. A girl in her class had a baby that year, around the time it started, and a baby is worse. She was twelve when it started and it lasted a year, until her father moved back to Clovis and Jesse stopped coming around. He was still in town, still worked at the Sony Only. She still saw him sometimes at the Sav-On. He just stopped coming around, like he hadn’t ever needed to at all.

For their fourth date James and Janet go to the movies. She shows him how to sneak in the fire exit at the multiplex, and they see part of a superhero movie and part of a history movie. She’s a little stoned, and all she can pay attention to in the history movie is the clothes, the big skirts and the corsets that press the actresses boobs up and pull their waists in until they look like the hollyhock ladies she made when she was little: one hollyhock blossom jammed into the other, and suddenly you have a pretty girl.

Janet’s sister was pretty when they were growing up, always a little older and always spread a little more outward, like the day she woke up in had gone on just a little longer. But when she got home she looked like Janet: face sharper, elbows held in. She had been living in Hawaii with a Chinese guy, but then he got arrested for dogfighting and she ran out of money, so she came home.

You thought there was money here?

I got sick of the sun.

When’s he get out?

Might be already. I’m just sick of the sun.

They caught the I-5 killer the year Janet was supposed to finish high school. She was working at a convenience store and was allowed to watch TV behind the counter, and when he came on she turned it to mute and sat back and watched him, his face, his hands, until a customer came in. He was as handsome as she had imagined. His hair was dark and he had a thick beard. She still didn’t think of any man without a beard as being all the way grown. She knew he would escape soon, and she only wondered how.

Her father got Jesse some construction work, and after the first day they came home and showered, and her father went out for some fried chicken. Janet was sitting on the couch watching Alice when Jesse came down and sat next to her. There was something boy in his chest flushed from the shower, and he untucked his towel and pulled out his dick, not jerking off but stroking like a girl would, and put his other hand on her neck and pushed her onto him, grabbed her by the hair and pulled and pushed her until he was done.

She started gagging when he came, and he found an empty ice cream carton in the garbage and had her throw up in it, rubbed her back and kissed her forehead and told her how brave she was, like she had gotten sick and that was all. Alice was over and he turned the TV off. He put his shirt and pants on and lay down on the couch and had her lie down beside him, put his arms around her and had her put her arms around him, and soon her father was home again and it was dinnertime.

He was so lonely that he started coming to her mother’s house at night, opening the door that was always left unlocked and coming into her room. She used to share it with her sister but her sister was gone. He would lie down in bed beside her and tell her to make him feel good, and she made him feel good. He put his fingers inside her, but never his dick. He cried sometimes, and he seemed so pathetic, so weak, so little. She never felt like the strong one again. She thought she might with the I-5 Killer.

She doesn’t know. She turns thirteen and her father moves and Jesse stops, like he hadn’t ever needed to at all.

For their fifth date James and Janet are supposed to go to the fair, but instead Janet pretends to forget, and goes out to the freeway rest stop where she imagined going to meet the I-5 Killer. She is wearing her best dress, the one that looks like silver from far away. She sits on the dying grass and picks the daisies around her and starts a daisy chain, a good occupation for waiting. He is serving life in Salem, about an hour away, and if he escapes tonight she will be ready to hear what he has to say.

Sarah Marshall is a student in the MFA program at Portland State University, and is currently at work on a novel in stories. Her writing has recently appeared in Hayden's Ferry Review, the Rumpus, Knee-Jerk, and Necessary Fiction, and she is a frequent contributor to the Hairpin and the Awl.