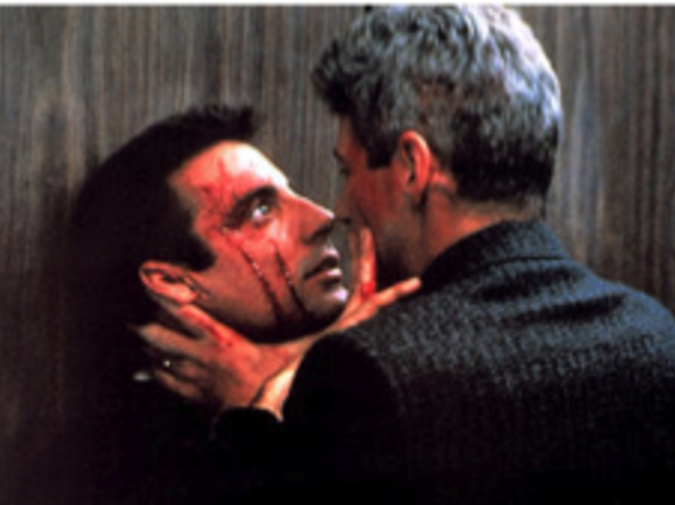 There’s an era of neon baths and tricky editing, slick cinematography beaming crack-sped malevolence – early 90s malevolence theatre. Crime was the throwaway genre behind the spectacle and Henry Bean strode his take meaner than most. He made Richard Gere anally slither as icon of voyeur fetish kill fantasies. Internal Affairs is a nihilist crack pipe noir that answers the problem of jealousy. Bean cures hetero monogamy of squareness, backwardly complete of its unnecessary evolution. He solved the worthless hetero problem. Watch Garcia fetishize his way out of being cuckolded by having his offending love join him in the voyeurism of her (possible, ambiguous) deed and assist with the home wrecking other’s (Gere) destruction, not in order to exonerate herself, but to attend a necrophilic second honeymoon. If the inwardly atomic scrape caused by cheating could morph legally into a sex game with lines this good and an ending in which your reinvigorated lover encourages and sexualizes with you the violent death of her second man, jealousy would work, would hold hands with love, and yes, that is the best conclusion of jealousy, and, henceforth, marriage: murder is okay. If you’re done with life, save your friend’s relationship and be his Dennis Peck. Loyalty does not exist without some kind of amendment. Deep Cover is also a bleak poem. Bean’s characters need and receive in a circle. Characters still bounce under the rolling pin of their psychological mishap. He’s dribbling the void or vice versa. You can hear Bill Duke growling in the edit. Style surpassing construct, construct eschewed, chopped and frozen, enhancement as a joke. Style like a small kicked fence more about the beauty of fences than the pretension of boundary.