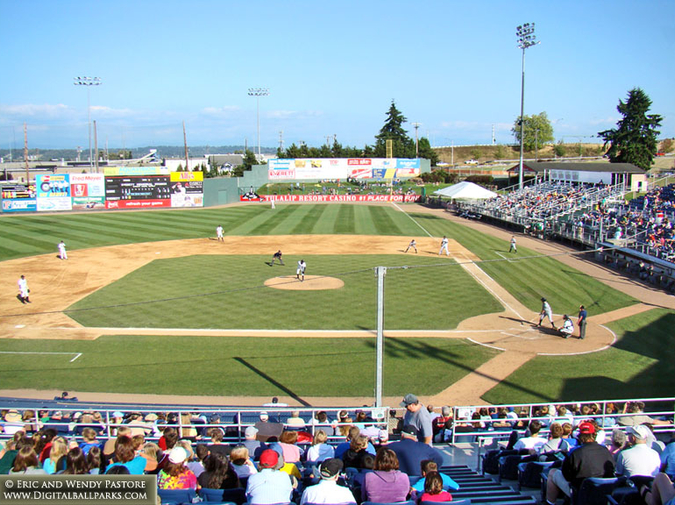 In the summer of 1987, my father took me to my first minor league baseball game. At the time I only vaguely understood the hierarchy of professional baseball. It didn't matter to me that most of the players I was going to see that night would never step on a Major League field – these guys were pros, and I was excited to watch them play.

I was seven years old. I had disproportionately large teeth and, potentially, a mullet (I know unequivocally that I had a truly horrific mullet during this era of my childhood, but the exact chronology is a little hazy). I was just learning to play baseball, blissfully unaware that I was already nearing the peak of my trajectory as a player. I topped out somewhere between the daily whiffle ball games in my backyard and little league, but I very quickly acquired the hallmarks of lifelong fandom. I collected baseball cards. I memorized stats. I watched my hometown team, the Seattle Mariners, consistently lose in the gloomy confines of the Kingdome.

Now here I was getting set to watch a Single A game between the Everett Giants and the Bellingham Mariners. Located an hour north of Seattle, Everett is a blue collar place, a smoky, rusty-trestled town situated between Port Gardner Bay and the Snohomish River. The people of Everett have a proud industrial history. They are lumber people, Navy people. They  build airplanes. The ballpark is visible from the freeway. All of which makes it a quintessential minor league baseball town.

I could see the advertisements on the outfield wall as we made our way through the gates. We found our seats along the first base line. My dad bought me a hot dog and a soda. We watched the players warming up, the fans settling in.

The game started. In the first inning a kid sauntered up to the plate. He dug into the left-handed batter's box, wagged his bat a few times.

"That's Ken Griffey Jr.," my father said. "His dad is a big leaguer. He'll be a special player one day." I have no recollection of the at bat.

The game wore on. We saw players make plays. We heard bats crack and gloves being struck with balled fists. Between one of the innings an overweight and unexpectedly fleet-footed speed-walker defeated a fan in a race around the base path. We laughed.

As the sun set we left our seats and moved to the grass near the foul pole. The lights above the field popped into being. Behind us clusters of kids were gathered in an open field, mitts poised, waiting for a foul ball to come sailing over the back of the bleachers. I don't remember who won the game.

When it was over my dad took me on the field with the other kids to get autographs. I ended up somewhere in the middle of a long line. At the front of that line was Junior, smiling, signing gloves and baseballs. I was almost to him when someone from the team tapped his shoulder. It was time to go. He signed one more baseball. Then he apologized, waved at the crowd and jogged off.

I was content with the evening. I didn't need an autograph from someone I'd never heard of. But my dad wasn't quite ready to give up.

"C'mon," he said, leading me by the hand. We followed Junior down the path to the parking lot, watched him disappear into the team bus.

"Sometimes you have to be persistent," he said. We walked up to the bus. Its engine was idling, the door was shut. My father knocked three times. The door opened. The driver looked at my father with contempt.

"Is Griffey on here?" my father asked, already knowing the answer to his question. "My son was hoping to get an autograph."

I heard loud chatter and laughter coming from inside the bus, the sum total of youthful hope. One of the players was standing near the door. He heard my dad's question and walked over to say hello.

My father laughed, so I laughed. The player chatted with my dad for a minute. He signed my glove. Then he looked back down the aisle of the bus.

"Kenny!" he yelled in mock anger. "Get up here. There's someone here to see you."

I heard the sound of baseball cleats clomping down the aisle. Then he was standing there at the top of the steps. He was still buckling his belt. He had a big smile in his face.

"Sorry to bother you," my dad said. "Sounds like you were in the middle of something. My son was hoping you could sign his glove."

"It's fine," Junior said. He was soft spoken, polite. He reached out for my glove. I handed it to him.

"This your glove?" he said.

"I used to have one just like this," he said as he scrawled his name across it with my dad's ballpoint pen.

He laughed. Someone inside the bus called his name. It was time to go again. My father thanked him, and he disappeared back down the aisle. The next time I saw him he was on television, playing for the Seattle Mariners.

It was only a brief exchange, I know, but it's something I look back on with gratitude as I prepare to watch Junior's induction into the Hall of Fame this summer. I'm grateful for the game, of course, the thing that drew me, my dad and the kid who would become greatest player I ever saw to a patch of grass in an old Northwestern lumber town. I'm grateful my dad had the guts to knock on that bus door. And I'm grateful for the kid from Donora, Pennsylvania, the one who wore his hat backwards and played pranks on his teammates and went on to hit 630 Major League home runs – the kid I emulated in my backyard, the kid who signed my glove, the kid whose now-famous signature slowly vanished from said glove during the course of thousands of games of catch (I know, I know – who continues using a glove signed by a Hall of Famer?)

I'm too old now to glorify athletes. Ken Griffey Jr. is just a man. He played baseball exceptionally well, historically well, so well that it came to define his life. I congratulate him on his success. I have many fond memories of his time with the Mariners, and I look forward to watching him enter the Hall. But my favorite memory of him will always be that night in Everett, when we were more or less equal, just two kids talking baseball in the doorway of a bus.

My son turned four in January. This spring he will play his first game of t-ball. In a few years his hand will fit the glove Junior signed all those years ago. I'll give him the glove and tell him the story and he'll nod as if he cares, but Junior won't mean anything to him. He'll be more interested in some other player, someone working their way through the ranks right now, toiling away in obscurity. So it goes.

I do hope he comes to love the game. I hope he learns to respect its history. The choice will be all his. I will encourage him to pursue his own interests, whatever those may be, but I reserve the right to expose him to baseball. I look forward to exercising that right this summer, when I plan to take him to a game in Everett.

We will wear our Mariners hats and sit in the grass along the right field line. I won't say anything about that night, but I will think about it. I will walk by the spot in the parking lot where my dad stopped the team bus and I will chuckle to myself. My son won't notice. He will be over-stimulated, trying to process the sights and sounds of his first ballgame. I suspect he will smile often, the way Junior so famously did throughout his career.

Much has been said about that smile. I'm not in the business of describing smiles. I won't ascribe to it any special powers, nor do I wish to romanticize it more than I already have. I am, however, willing to verify that I noticed it too – me and a whole generation of kids who grew up watching him. All of us remember. I don't know why he smiled so much. He probably just loved baseball. Whatever it was, whether he knew it or not, whether my characterization is fair or not, it sort of felt like the Kid was smiling for all of us.

Chad Schuster‘s fiction has appeared or is forthcoming in Glimmer Train, Gulf Stream, Pithead Chapel, Literary Orphans, Juked and elsewhere. He lives near Seattle with his wife and two children. Find him at www.chadschuster.com or on Twitter @Chad_Schuster.