I Keep Bumping Into Candy Maldonado 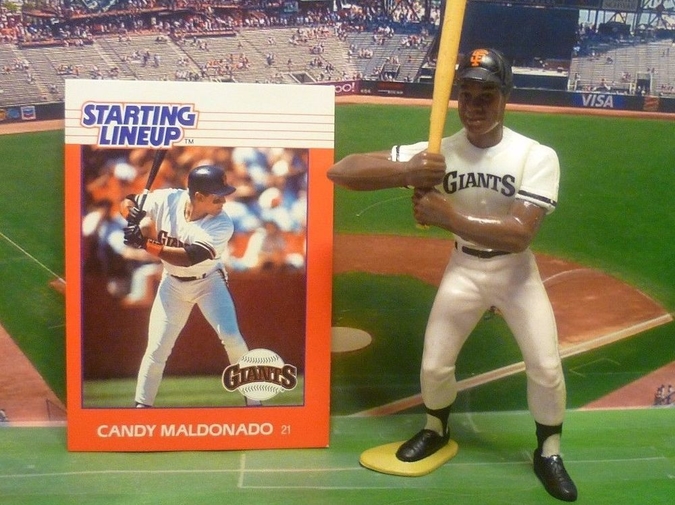 I was standing in line at the new hard-boiled egg place when I looked behind me and saw that I was standing in front of the famous retired baseball outfielder Candy “The Candyman” Maldonado.

“You’re Candy Maldonado,” I said both out loud and in my head.

So he bought me a hard-boiled egg, then I said thanks, and then he said he had to get going because he had to go give a motivational speech at a local elementary school. When I got home I told my girlfriend Mary-Kate everything: that there’s a hip new takeout place that only serves hard-boiled eggs and that I bumped into my favourite former Blue Jay while I was there.

“If only I was wearing my jersey! I would’ve asked him to sign it!”

“You are wearing your jersey.”

I looked down at my torso and she was right as always.

“What a missed opportunity,” I moaned. “What are the chances that I’ll ever bump into The Candyman again?”

It was a rhetorical question meant to imply that the chances were very low that I’d ever bump into The Candyman again, so low that it was likely that I’d never bump into him again.

I bumped into him again the next day.

I was getting my bicycle tuned up at the new bespoke bicycle mechanic, Spoke Bespoke’s, when who should walk in but Candy Maldonado.

“Hey you’re that guy from the egg place!” Candy said.

“You two know each other?” said Spoke.

“We met at the new hard-boiled egg place,” I explained.

“I only realized when I got home yesterday that I was wearing a jersey with your name on it,” I said to Candy .

“I thought it was weird that you didn’t want me to sign it,” he said.

“Maybe next time we see each other!”

And we laughed because we knew we’d never see each other.

When I told Mary-Kate that I saw Candy again at the bike place she said I should bring the jersey with me wherever I went from then on, just in case, and so right before I left the next morning for work I made a big show out of stuffing the jersey in my messenger bag. And we laughed and laughed.

Well there Candy was, having an espresso allonge in the coffee shop where I get my morning coffee.

I took the jersey out of my bag and got him to sign it. He was really nice about it. We agreed that it was a nice way to wrap up our relationship.

That night I met up with my friends at our pub, Guernsey’s, which isn’t the name of the person who runs it (Irene), but where she’s from (Guernsey). I was telling my friends about the whole Candy thing and they were in awe because they too were huge fans of his, and then Irene came over with a fresh round and of pints that we didn’t order and explained that it was compliments of the nice tall man in the corner and we all looked over and there was Candy Maldonado, waving a friendly smile at us. We invited him over and he wowed me and my friends with stories of his time in the bigs and the big World Series win with the Blue Jays in ‘92 and we stayed out late, had several more rounds, and really had a great night, and Candy, the great generous guy he is, grabbed the whole bill. I stumbled home thinking to myself how lucky it was that I got to have Candy Maldonado in my life, even though we had reached the end of our time together.

Except that wasn’t the end.

I saw Candy the next time I went out. And the time after that. And the time after that. I saw Candy Maldonado literally every time I went outside. At first I thought it was funny and cute, a sort of haha we can’t stop meeting like this kind of thing, but after a few weeks it stopped being funny and cute and started being worrying and concerning. Why did Candy Maldonado and I stop at the same five-pin bowling alley on a Wednesday afternoon? Why did Candy Maldonado and I both decide to go to the craft beer brew-pub at 6pm on a Sunday? How did he manage to be everywhere I went at any time of day? I couldn’t stand it anymore. I felt cursed. No matter where I went when I left my apartment, Candy Maldonado would be there too. There must’ve been something bigger at play here. Like something was in control other than myself. How could I trust that the ideas I had were my own? I asked my scientist friend if this had something to do with quantum coupling and he told me that’s not really how it works. But something big was at play. Whenever I had a thought to go somewhere, Candy must’ve had that same thought at the same time and vice-versa. Whatever the mechanism was, I wasn’t in control of it — my actions were being determined by a source outside of myself. It scared me. I told Mary-Kate that I would never leave my apartment again.

“And what would that solve?” she said.

I stayed inside for four days and I was right that it solved the Candy Maldonado problem but Mary-Kate was right that it started other problems. I was like a dog who needed a walk, except I pee indoors. What I mean is that I was restless.

I went outside. Didn’t see Candy. I hopped on my bicycle and started riding. I rode 15km, found a park, walked as deep as I could into the centre and sat down beside a tree. Candy Maldonado was on the other side of the tree.

“So are you stalking me?” he asked. “Like, are you one of those weird fans? I retired 23 years ago dude, you need to let it go.”

“Then why do we see each other wherever we go?”

We agreed that it had to be stopped and we only had one good idea to do that: I would move into Candy's home, and we would only be allowed to leave the house one at a time. It’s worked.

Candy and I don’t see much of each other these days. When he goes out, I stay in; when he stays in, I go out. That’s the agreement we made. It’s a pretty good setup in that it feels like we beat whatever curse we had against us. But, as horrifying as it was to see somebody everywhere I went, Candy was a pretty good person to be that somebody. And even though I finally feel that I have my free will back, I’m sad that it was at the expense of becoming friends with a nice man and a great ballplayer.

Jordan Moffatt lives in Ottawa, where the Ottawa Champions play in the Can-Am league. Jordan’s short fiction has appeared in many places online and in print, including Bad Nudes Magazine, The Feathertale Review, and This Magazine.