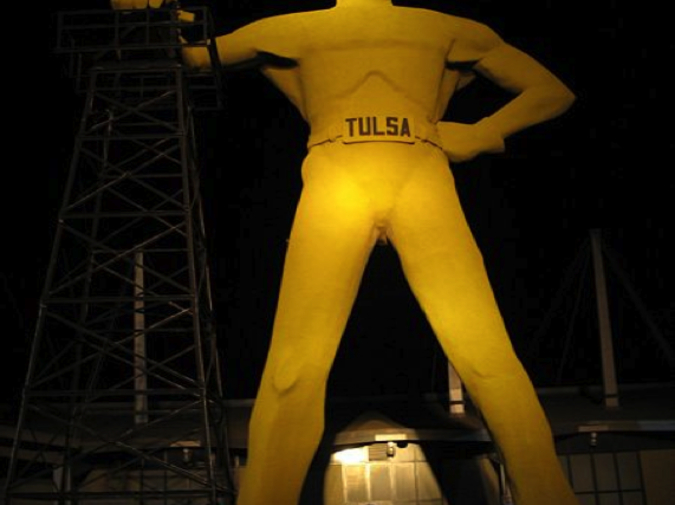 Today, to kick it all off, we've got the first sentence from every story/poem/essay/comic in the issue...

I worked as a flight attendant for seven years, probably 5460 flights. I’ve said hey and goodbye, Coke or Diet Coke, and tray-table-up-please to about 546,000 people.

546,000 people is more than the entire population of Tulsa, Oklahoma.

Tulsa is famous for The Golden Driller, the biggest free-standing statue in the world, though the driller is more yellow-mustard than golden. He’s ripped and cocky and has a massive belt buckle that says TULSA. He has his own oil derrick to lean on. Tourists stand under the statue and get pictures of themselves staring up at his impressive golden crotch.

I flew from 1994 until 2001. The weirdest in-flight story was the one about an investment banker from my home-base New York City.

On a flight from Buenos Aires to JFK, the banker got drunk. Flight attendants cut him off. The banker got angry. He helped himself to the liquor cart, stumbled to first-class, climbed on a service cart, dropped his pants, and, in front of everyone, took a shit. Then he stepped in his shit and tracked it through the cabin.

No flight attendant I’ve known ever questioned the story, even before it made international news, even before the banker had to cough up a $5,000 fine and 300 hours of community service and reimburse over $50,000 to the other passengers who had paid good airfare to watch him shit on a service cart.

What every flight attendant wanted to know was this: if the guy was so drunk, how did he get up on the cart? And how did he hold his balance once he was up there?

One time, professional wrestler Jake the Snake handed me his bag, then told me his pet python was inside.

I saw him in a movie once and all he wanted to do was cocaine.

Another guy zipped a Chihuahua into his jacket pocket, then put the jacket on the screening belt when he went through security. Two TSA agents saw the tiny skeleton and called Security, who escorted the guy and his dog off the plane.

During beverage service, a fat guy in suspenders snuck up and licked me. He nailed my neck, behind my right ear, in the little gap between my regulation scarf and my hairline. I will always be traumatized by this. He wasn’t wearing shoes. He had on red socks. People who take their shoes off on airplanes are terrible people. Shoeless people who lick flight attendants are worse. All I could think to say was, “You. Step back. Now.” I wiped the wet spot with my scarf and kept pouring drinks. I didn’t report it. It was embarrassing and I was pretty new. I felt like licking might happen a lot. It didn’t.

Passengers bicker and slap each other over arm rests. They fistfight for overhead space. They tattle on each other for cell phones and tray tables and seatbelts that need buckling.

They want upgrades. They want free round-trip tickets, free drinks, one of those turkeys the airline used to give out at Thanksgiving.

A Furby malfunctioned and smack-talked Furbish from inside a little girl’s backpack. The mother was embarrassed, exhausted. She mouthed “sorry, sorry,” to all the other passengers who scowled as she took the Furby out of the backpack and tried to get it to stop.

She couldn’t get it to stop.  She needed a screwdriver to pop the batteries. Screwdrivers are weapons and not allowed on board.

A woman huffed and slammed her head into her seatback.  A man hit his call button.

I took the Furby and wrapped it in a blanket. I stuffed it into the overhead where it was muffled to a nub. People complained. They said they could still hear it. It was giving them headaches. It was making them crazy.

“I did not pay good money to listen to that garbage,” the seatback woman said. She wanted a free ticket. She wanted free drinks.

I brought her drinks.

Then I brought drinks to everyone, including a bottle of champagne for the little girl’s mother, who looked like she could use a drink most of all.

It’s not o.k. to poke a flight attendant in the ass like the ass is a doorbell that might be broken. It’s not appropriate to do this even if you want to know what time it is in Iceland.

The first time I saw passengers try to have sex, it was a low-key thing, the back row in coach, not too crowded. The girl was giving the guy head. She was kneeling between the seats, buried in his lap.

“Excuse me,” I said, “Can I get you both something to drink?”

I went back to the galley. Della, a senior flight attendant was there. I asked her what I should do.

“Cinderella,” she said. Della called all junior flight attendants Cinderella. “You have to learn.”

Della walked over to the couple, threw a blanket over them, and let them be.

“My dear,” Della said, adjusting her scarf, “some things we don’t get paid enough to do.”

On a flight from New York to Boston, a group of kids were headed for tennis camp. The overheads were loaded with rackets and the kids all looked like they popped from a J. Crew catalog.

On descent, something went wrong with our hydraulics, which control the flaps, which steer the plane and help it slow down on landing. The captain, blonde and blow-dried, all starch and chisel, popped from the same J. Crew catalog as the kids, briefed the flight attendants. We prepared for an emergency landing.

The flight attendant I was working with was the meanest person I’d met. She was all muscle and bitch. Everything about her was short: her height, her hair, her temper. “Fuck these people,” she’d said before boarding, like she planned for everyone to have the shitty day it turned out to be. When I looked at her I saw a desiccated chicken wing. I thought, I will not die next to a chicken wing.

Still, Chicken Wing and I showed people how to brace. We pointed out exits, explained what would happened if we had a hard landing, which is what we said instead of crash.

The people in the emergency exits froze.

A woman started talking loudly about her cat Sniggles.

Half the kids started throwing up.

We didn’t crash in the ocean.

In Boston, they gave us a long runway and foamed it down. There were fire trucks, ambulances. The plane made it to a full stop, and the captain came over the PA to let everyone know things were o.k.

The woman with the cat started crying.

The kids who were throwing up stopped.

The kids who were chanting were disappointed. They made a new chant. It went: “Aw.”

I don’t know why anyone would want to have sex on an airplane. It’s cramped. The seats are uncomfortable. The lavs are disgusting. At any minute oxygen masks can fall from the ceiling.

Everything is inexplicably sticky on airplanes, maybe because people keep insisting on having sex in the sky because it makes them feel like they can go on breathing.

Lori Jakiela is the author of two memoirs -- The Bridge to Take When Things Get Serious (C&R Press, 2013) and Miss New York Has Everything (Hatchette, 2006) -- as well as a poetry collection, Spot the Terrorist! (Turning Point, 2012) and several poetry chapbooks.  Her work has been published in The New York Times, The Washington Post, The Pittsburgh Post-Gazette, The Chicago Tribune, Brevity, KGB BarLit, Superstition Review, 5 AM and more. She worked as a flight attendant for Delta Air Lines for seven years and spent most of that time in hotels or in the air. These days she lives in a normal house just outside of Pittsburgh with her husband, the writer Dave Newman, and their two children. She teaches in the writing programs at Pitt-Greensburg and Chatham University. Her website is ljwritesbooks.com.