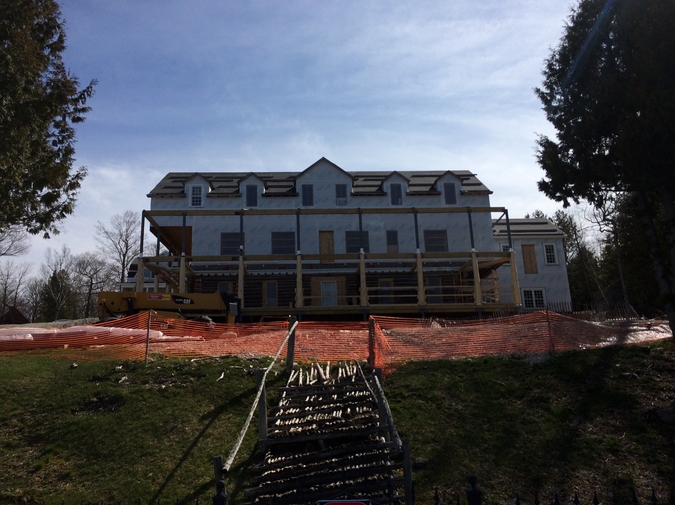 The first time Bill and Mary ran into the other couple was at Shellback’s, the local bar. Bill and Mary were leaving because Mary felt old, when a woman’s hand fell on his shoulder. It was Gwen from high school, and her husband. Gwen and Mary had done cheer together. Bill couldn’t remember the husband’s name, just that they had all gone to the same high school, dated the same people, and were now married to different people but somehow the same. They lived in the same town, in different houses and went to the same bars with different names.

She’s good people, Mary said. I like her husband, too.

I can’t remember, but he was one of the popular kids, Mary said.

The next weekend Bill and Mary were at Boccatto’s standing in line to pay for their deli sandwiches. It was a beach day, and they were going to bring the sandwiches down with them.

Oh my God, Mary said, turning and seeing Gwen. Both Gwen and her husband wore orange beach chairs, the kind with straps like backpacks. Bill and Mary had the same chairs, Tommy Bahamas, but in blue. Last year’s model.

This is a sign, Bill said. Gwen insisted on getting Mary’s number. They needed to get together for drinks soon, they all agreed.

Monday morning, Bill was exiting the 405 for work. There were two exit lanes and traffic had come to a full stop. Casually, Bill looked over at the driver next to him in the black SUV. The woman had long brown hair and she was wearing a dress, Bill could tell. She fixed herself in the mirror. He rolled down his window and smiled, honking his horn until she looked. Gwen shook her head and lowered her window.

What are you doing here? Gwen asked.

What are you doing here? he asked.

They worked across the street from each other, they found out.

Bill called his wife from the car.

Guess who I just saw?

When Bill came home from work, Mary sat in front of the TV with Mexican take-out. Bill could smell it. Her t-shirt was damp and her yoga mat partially unfurled on the hardwood. Bill went into the kitchen and heated up a frozen pizza.

Honey, his wife said over the TV. Guess who was in my yoga class tonight?

Who? Bill asked from the kitchen.

Bill came out of the kitchen.

His name is Trevor, Mary said. Bill watched her face tilt down and her mouth open to meet the fish taco. She kept her eyes on the TV.

The universe is telling us something, she said, chewing.

That Sunday, on their way back from brunch, Bill and Mary pulled onto their street. Across from their home was a brand new house with white slats and blue trim, and a grey shingled roof. There was a moving truck parked alongside with movers in grey jumpsuits unloading furniture. The movers had upended a blue velvet couch so it could fit on the dolly and roll.

Finally someone is moving in, Bill said.

As they passed the moving van, standing on the front lawn was a couple, surveying the move. Bill rolled down the window. The couple turned and Bill stomped on the brake.

Gwen ran up to the window.

Trevor winked and waved from the lawn.

Later that week, after his morning run, Bill caught Trevor on the front lawn heading to work.

How do you like the neighborhood? Bill called. Trevor gave a thumbs up and turned away, putting his briefcase in the car.

You guys getting settled?

Yup, Trevor said, taking off his coat before entering the driver’s side. Maybe Trevor didn’t recognize him.

Yup, Trevor said, getting into the car and backing out of the driveway. Bill waved goodbye but the wave was not returned. After the car was gone, Bill looked at their lawn, the grass. It was the greenest, softest looking grass Bill had ever seen. From the sidewalk, he stepped onto it, just to see what it felt like. He looked around. No one saw him. He sat down on the grass, and it tickled his legs. Then he rolled onto his back and lay there, slowly closing his eyes.

That night, Bill was home before dark, before Mary. The doorbell rang. When he answered it Gwen was there.

You got off early too, huh? Bill asked.

She needed help with the grill. Trevor was at power yoga. They had a smoker and she was having trouble getting it going.

Bill found it in her backyard, one of those Big Green Eggs. He diagnosed the situation quickly. She needed to layer the coals, he said. She watched him stack the coals gently inside and then she drenched the whole mound in lighter fluid.

Not too much, Bill said. You’ll burn off my eyebrows.

Then he lit it, stepping away from the eruption of flame, and left the lid open. He explained to her the phases of the burn and she listened intently. Trevor had never properly explained it to her, Bill could tell.

Afterwards, she offered to cook him a turkey burger, but he declined. She put her hand on his shoulder and gave him a hug, more of an embrace really, at the front door. They both smelled like smoke.

The next morning, Bill woke up to an empty house. The pillows on Mary’s side of the bed were neatly propped against the headboard, and her side of the sheets was tucked in and perfect. In the bathroom, the blue towels they used were dry on the rack.

Pasted on the pink tiled wall of the shower were a few strands of brown hair.

On his way to work, when he tried calling his wife, she didn’t answer.

Leaving the office at dusk, Bill found himself driving behind a black SUV. He was sure it was Gwen’s. She entered the freeway and he followed, following all the way to the exit home. But when it came time to turn into her driveway, her car was still ahead of his. She slowed at his long driveway and pulled in all the way, parking in Mary’s usual spot. Maybe Mary had invited her over. Yes, Bill thought, even though he did not see Mary’s car on the street either. Bill pressed the button for the garage and parked inside. He checked his phone for missed calls from Mary. Then he entered the house.

Hi, Gwen said from kitchen. She had an empty salad bowl on the counter and a bag of unopened kale right next to it. She tore open the bag and poured the kale into the bowl.

Bill took a seat at the counter and watched her toss the salad.

Later in bed, he spooned Gwen from behind. He sniffed her hair. It smelled minty.

The next morning was a Saturday, and when he woke he was alone in the bed.

He got up, his right knee cracking in place as he took a step. He checked the bathroom, the kitchen, the driveway. Gwen’s car was gone. The spot was empty.

He changed into sweatpants and a hoodie and went outside and walked the few houses down until he was at the front door. He rang the bell. No one answered. He peeked inside through the window. He could see them all in there, laughing. He heard the faint sound of music, too. Holiday music. They were sitting at the dining room table, Trevor, Gwen, and his own wife Mary. They were clinking champagne flutes filled to the brim. They were celebrating something.

He banged on the door. He kept ringing. Finally, he took a step back, and grabbed one of the loose pebbles that surrounded the walkway and side-armed it right through the window, shattering the bottom corner, leaving a hole the size of his heart.

Ashton Politanoff lives in Redondo Beach, CA. His writing has appeared in NOON, Sleepingfish, and elsewhere.