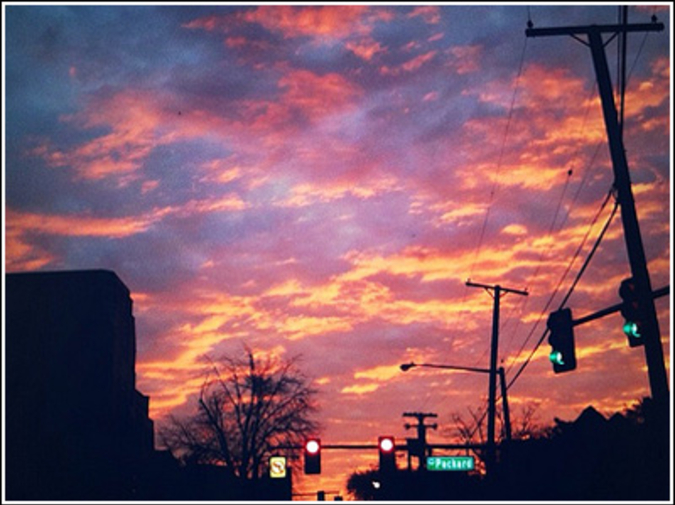 The sun wasn't even fully up yet and there I was, on some stranger's roof, about to begin work for the day, when this girl, maybe four or five years old, tottered down the front steps of the house across the street in an old-fashioned nurse's uniform.

There was a white cap emblazoned with a tiny red cross, a white dress with a hemline a few inches below the girl's knees, and a red shawl that hung from her shoulders like a cape. She had a stethoscope around her neck and a small nurse's bag she carried like a purse, draped over her wrist.

I imagined a grim-looking boy inside the house, her younger brother, maybe, lying on his back, pretending to be a sick old man.

The way I saw it, the two of them woke up early. She had slept in the nurse costume — something maybe her father had bought for her, even though Halloween was a good two months away — and she and her brother, crusty bits of sleep in their eyes, fell immediately into the game. The boy coughed and muttered something about his liver. The girl put her stethoscope to his chest and listened to his heartbeat. She pressed her pale fingers into his abdomen. "Does it hurt when I do this?" she asked.

The girl retrieved her nurse's bag from beside her bed and went to work.

She disinfected the skin with a dry cotton ball. She opened a bandage and secured it to the boy's side, just below his ribs.

She sat vigil a little while longer, taking his pulse, placing the back of her hand against the boy's forehead to check for a fever, and then she exited the house.

In a couple of minutes, I would begin scraping the old shingles from the roof, working them loose one row at a time. I would begin carefully descending the roof's steep pitch. But an hour earlier, before Carl came to pick me up for work, I was drinking coffee and sitting in the computer room at the shelter. My shoulders and back were sore, but I managed to sit there long enough to write my wife an email. When I was finished, I wrote a separate email to my daughter and asked my wife to read it to her, please.

I'd sent similar emails the previous three mornings. I'd told my wife I that I hadn't yet unpacked my bag. I'd told her I hadn't drunk a drop in days.

I won't say what I'd written to my daughter.

The girl was all the way down the front steps now and onto the sidewalk, walking away from me. She had her shoulders thrown back, her chin raised. It looked like she was headed to the next house over, to see how some other patient was doing.

She adjusted her bag, pulled it up a little on her forearm, and it took everything I had not to call out to her. Not to point to the spot on my chest and say, "Here. Come back. Let me show you where it hurts."

Chad Simpson's work has appeared in several magazines, including McSweeney's Quarterly, Esquire, Barrelhouse, and The Sun. He lives in Monmouth, Illinois, and teaches fiction writing and literature classes at Knox College. He irregularly keeps up with a blog at http://sadchimpson.blogspot.com.