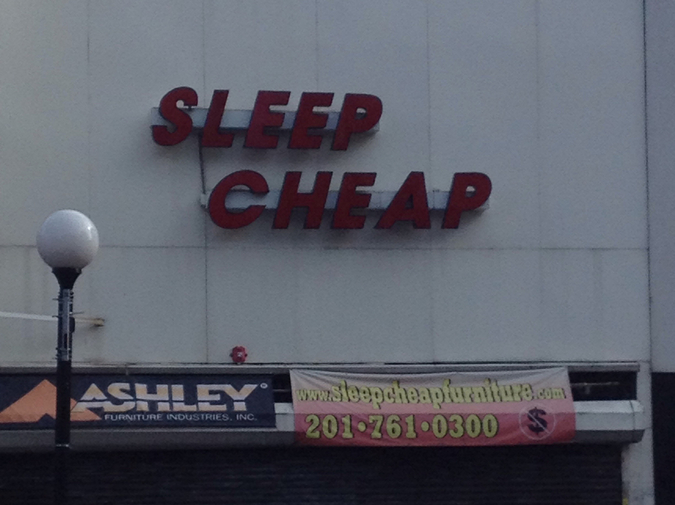 Disclaimer; my memories of the day in question are cloudy (the cause of which I suspect to be years of substance abuse finally taking their toll) and should not be taken as a factual account. Enjoy!

I wake under a heavy pile of blankets. The air around me crisp and conditioned. There's the creek of a floor in the other room. I follow it. Joey is sitting in an old chair. Hunched over his phone. He looks up at me. Big smile on his face. These are nice people. I shouldn't be filled with so much anxiety.

Bud comes in from the kitchen. A mug of coffee in both hands. A smile from ear to ear. The kind that warms you. He hands a coffee to Joey and asks if I want one too. He turns back to the kitchen. I pace around a bit. Look out the window to the street. Watch cars zoom pass. Turn around. No plan. So I sit at the dining room table.

We bounce around ideas about what to do. There's a feeling in the air. That because I've never been to the New York. That maybe we should see some things. But my I don't give a shit attitude extends far beyond the internet. And I'm more than happy to follow along. No special treatment for me.

Joey needs to get some beer for the reading tonight, says it's cheaper in Jersey.

Most days. By this time. I've smoked a few joints. High as a kite. But I don't have a connection in New York. And no good prospects. So I ask if there's any beer in the fridge left from last night. I drink it down. No one else indulges.

Before we head out. Bud treats us to a local delicacy. Fried pork roll. On the way to the train. We stop at a corner store. And even this far from Texas. There's a giant glass cowboy boot full of bottom shelf tequila. I stare at it, but I don't want to lug it around all day. It's just not in me. Instead I buy a small bottle of Evan Williams to keep me company.

I follow along like a lost kid. Carrying a case of beer. Listening to Joey and Bud talk. Put in what I can. Talk shit when appropriate. Try to pass as many jokes as possible. Try to feel like I'm a part of something.

As we walk I watch the street. Take in landmarks. Ask Bud questions. I'm going to have to do this on my own Saturday morning. Find my way back to Port Authority. Probably suffering an appalling hangover. I have to commit it to memory now.

We take a train into the city. Then a subway. Up to street level. People and buildings and cars. Follow along.  Don't lag or get lost. Take a deep breath. Things are going well. Better than I thought.

I don't like most people. And have been jealous of Bud for ages. With reason. He has lots of good stuff out there. Has the vote of the people. And I normally shun from those with approval.

But fuck. That's just me being shitty. I figure that I should just be happy. Thrilled that I'm not completely bored with literature. And he's one of the reasons. And I'm here walking along beside him. So while I'm in New York I'll feel a little less alone. Shed myself of some unnecessary envy.

We get to a tall building. Joey says this is the place. He opens the large heavy front doors. A security guard is sitting at a desk. I think to myself there's no way we're getting through here. This place has class. And we're all weighed down with this god damn beer in our arms.

But Joey talks him through things. And in a grand dereliction of duty the security guard waves us on. The fool.

We get off on the top floor. The reading is in a children's therapy center. Seems odd. But I don't ask any questions. What do I know. I'm a simple Canadian boy. I don't want to come across as unhip.

There's children there. Fucking disturbed ones. I eye them suspiciously. Wondering what violent thoughts they're thinking behind those tiny faces. I hear Joey say We're here to drop off the beer for later. The receptionist says sure thing hon, just take it in the back. There's a small fridge there. We put as much as we can in it without displacing any lunches.

The rest will be piss warm. But it's fine. Those are for everyone else.

We leave. Go to Joey's work. A bookstore nearby. We kill some time. After that we're hungry. We decide to go to some taco place a few blocks away. It's in an old garage. A hollowed out VW minibus is the kitchen. We order food. Drinks bursting with vitamin C. I admit I'm more hungover than I thought.

Bud gets a call or a text from Rae. She left work. Is coming to meet us. We eat. Flirt with the waitress. Drink coffee. Our conversation flows pretty easily. Mentally I take a deep breath. Give myself an old fashioned pep talk. Ok you dumb piece of shit. You can keep this up.

Rae shows. She has some food. We pay the bill. Leave. We walk slowly along the street. Trendy fashion shops on the opposite side. A cabby lays on his horn. I yell you ain't helping shit. A nearby postman agrees. Starts hollering at the asshole too. I smile. My kind of people.

I think this is when we go to CVS for aspirin. I suffer a bout of culture shock. Sure it looks like a Canadian drug store chain. But there's one big difference. You can buy beer. Fucking beer. At a pharmacy. I guess nothing washes down prescription medication quite like a delicious IPA.

We wander around. Bud and Rae go into a store. I say I'll stay out on the sidewalk. Joey offers to keep me company. But he ends up going somewhere. I'm left alone on a street corner. There's some real good feeling freedom in that.

Bud comes out. I confess I'm suffering some paranoia. That I'm going to run out of American money. The three of them wait in the reception area of a bank. The teller says I need to see an associate to change money. I wait at his desk. A woman in her fifties asks me if she can leave her bags on a table behind me. I tell her if you do, I'm going to steal your onion. We have a good laugh. Turns out she used to work in Toronto.

It takes some time. But I exchange my Canadian dollars for American ones. As we leave I wave goodbye to the older woman. Joey asks me how I know her. I tell him she used to work in Toronto. He gives me a real great how fucking small is Canada look. I laugh and tell him about the onion. How we became fast friends.

Joey says his sister Mikaela is in town. She's on her way to where he works. So we go wait there. I feel like an idiot. I don't like stores. They give me the shivers. Make my skin crawl. There's always too many people. Leaning over your shoulder. Bumping into you.

Mikaela shows up pretty quick. And like everyone else. She's nice. Happy to meet me. A little off putting. Not the treatment I'm used to.

Coffees are drank. Books are bought. Someone mentions finding a bar. Get some beers before the reading. Now we're talking. This sounds like bliss. I'm certain that so far today. It's the longest I've been sober in ages.

And I'm more than happy to end the streak right here right now.

I'm the first one to the door. Bud is behind me. And just outside is a woman fiddling with an umbrella. She blocks the entrance. I slowly open the door. Gently pushing her out of the way. She's stubborn though. But I'm no quitter. And don't give in until she's up trapped between the door and the wall.

She starts to protest. I laugh. I'm not sure but I think Bud does too. You're standing in front of the door, lady. What d'ya expect? Rae looks at me. Pleads for me not to embarrass her. And I believe her. My wife used to say the same thing. Before she learned to edge away. Pretend she doesn't know me.

I give myself another pep talk. Keep your mouth shut you old fuck.

We go to a bar a few blocks away. Sit in the back. I look around. Think about how a few weeks ago. When I was in Toronto. All the places looked just like this. And how when I was in there. I thought to myself I bet this is what the owner thinks New York looks like. Turns out they were right.

This is where Mikaela gives me some herbal tonic. She tells me it will cure my craving for smoking weed. Numb the horrors of the sober world. I'm skeptical. Under normal circumstances I'd pass this off as hippie hokum. But I have no access to marijuana. So I believe. And maybe it's my blind faith. But I instantly feel better after a few drops.

We drink a couple rounds. A friend of Joey's comes by. Some more people show up. I'm not sure whose friends they are. Or what they're called. I'm in my head. Shit. I have to read in a few hours. I've only ever done that one other time. And it didn't have the pressure of being in New York tacked on. More beer please. More hippie hokum thank you.

Mikaela and Rae go to pick up food. I refuse. Not now. I can't handle it. Beer is all I can stomach. They come back. After some coaxing I have a bite of a Cuban sandwich Bud and Joey are sharing. Pretty tasty. We drink up. Pay the bill. Go outside.

Soon it will be night in New York city. Shortly after that we'll read. And absolutely no one wants me to write about that.

Steve Anwyll is the author of the novel Welfare (Tyrant Books 2018) he also runs the twitter @oneloveasshole and recommends Dust Bunny City (Disorder Press 2017) by Bud Smith. It's a hell of read baby!