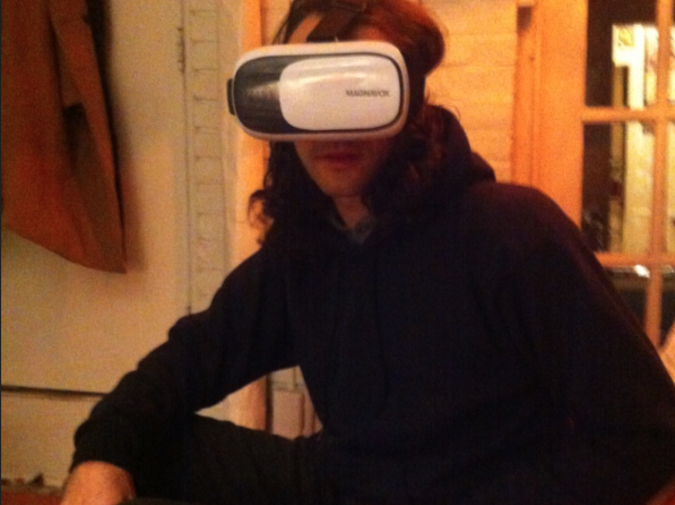 I don’t know if she is a dancer or if she is an actor. It is too late to ask her. She just got into the New School.

“Your father tells me I give him things you cannot fulfill,” I told her the second time I met her.

“Funny,” she said. “My father says the same about you.”

Her father Mark is my best friend. He gives me compliments. It feels like he understands me at the core. It is the kind of friendship that is very hard to find. Her father will soon be my father. Her family will be my family.

After the second meeting she told Mark she thought I was so so so funny. She thought I could make her laugh for long periods of time with minimal effort on my part. The third time we met I did just that. And her friends laughed and giggled when I did. I thought, like, are you sure? I wanted to say, I’m vulgar but I’m not hilarious. I was her source of laughter and so I was her source of everything. I sent her a short story I had written and oh my God could you please send me that other one you were talking about? She said that, “could you please…” And I thought I could please. Please. Could you please allow me to come over to your house? Tell your parents could you please leave for a while? Could I please make you laugh for a whole night just you and I? Could you please let me release those things you carry around all day? I can be the greatest thing ever for you. I can do that.

Promise to not assume that this is the one and only truth about my feelings for Liz. I had this recurring dream of me devouring her. My favorite color is black and my favorite sweater is my p-coat which is black of course and in this dream I am this. I am sucking in and taking her energy. I am taking her youth.

The fourth time we met she threw a fit because she couldn’t find the remote. She threw couch cushions into the air like they were responsible. She yelled at her parents from across the room in a girlish way that’s impossible to take seriously.

“Why the hell do I keep looking for this thing?” she asked.

“Because you’re a sadist,” I said.

She sat too far away on the couch we both occupied. A couch that would take on a huge amount of importance when I thought about her. A couch that signified home. In the fantasy it was always her laying on the couch with me getting minor allergic reactions on my face from the dust particles. Her looking at me with that smile that is real.

She didn’t find the remote so she showed me a Vine video on her phone.

I shook my head.

One day I told Mark that I liked his daughter.

I told him I knew of course but I was lying. I knew kids when I saw them and all of Liz’s friends were kids but when I saw Liz I saw a woman. And it always terrified me to see her next to her friends because they looked like kids. They had those small faces kids have and those grins kids have since they don’t know what real pain is. I’m not saying I know either really, I just know it’s fucked with me ever since I’ve been a real live adult. But the point is that Liz has this smile that is light and I want to call her my little creature. I want to look at her eyes for too long and how long can I keep up this thing?

I told Mark I liked her again. But he just says she’s a kid and if we were older we’d make a beautiful couple and hold on a second, what did I order?

How true is obsession anyways?

Because I imagine a beach with Liz and me on it. No. To be honest I imagine us, we’re always in Mark’s house, we’re on the couch I mentioned before. It’s a dark blue couch that looks like it has gone through the numerous financial changes the Weinberg family has gone through. Upheavals of money. But for some strange reason they kept the couch. I imagine the mother saying, “Oh but I like that couch.” And then it staying with them—going to their large apartment and being forgotten by everyone but me. And so it’s me and Liz in the living room. We’re laying down on the respective sides of the couch. The sun is on her face so I can’t see it and her hair looks like it's trapped pieces of the sun inside it. Her nose is frowning and I want to take whatever it is that she sees in me. I want to have it for myself. And if I can’t do that, I’d like her to be around me for lengthy periods of time.

The last dinner we had together with the whole family she was wearing those shorts that might as well not exist.

“Who do you like more?” she asked. She always wanted to know how much I liked her. I liked her father the most because our friendship was pure and solid. She was chaos and so she was allocated to number 2 and probably always would be number 2. I felt bad for my number 1 friend because I was really going to fuck with him if I kept feeling this way. Anyways, she asked the question and then pointed to herself. She nodded. Then she pointed to Mark. Then she pointed to her mother Laura.

I don’t know what Mark and Laura were doing as Liz pointed back to herself again with that smile but the point is that these clear walls came on both sides of Liz and I. She pointed to herself again and nodded slowly. I shook my head and looked at the table like I’m going to be set on fire soon aren’t I?

Her mother said something loud and I came back.

“I think you just said that to yourself,” said Mark.

I lean back in my chair and pat my stomach. I just want to see those plastic walls again. Nobody else saw them but Liz and I and she’s acting so cool like they didn’t exist at all. Liz showed me more Vine videos on that couch made of a soothing fabric I don’t know the name of.

You didn’t like that one either,” she said and asked.

Then she showed me a meme. I’m not fit for this world at all. My mother wants me to be a college professor and I said, “Are you kidding?”

“You can uber home or you can let me drive you home in 10 minutes,” said her mother.

“I have statistics homework,” said Liz.

As we walked to the elevators I’m noticeably upset but Liz’s mother thinks it’s because they’re not paying attention to me and I double the misconception over and say no it’s just that I have to work for a while and I really don’t want to.

Liz went off to Coachella that weekend and I couldn’t take my racing guts anymore. I resigned myself to the fact that I cannot live a normal happy life with family dinners and Vine videos. I cannot be with these people while Liz is around. I emailed her.

“Did you see those walls that came up between us when we had dinner? I’m certain I saw them but was wondering if you did too?”

I sent it off and there was no reply until Sunday and even Sunday I didn’t get a reply from Liz. Her mother texted me telling me she no longer wanted to pursue a friendship with me and to not try and contact Liz, Thank you.

So I guess those walls really were just for me. I guess the more that I think about it doesn’t really make any sense. It doesn’t make sense that I couldn’t hear anyone else in the room. That my world was occupied only by two. I know Liz didn’t see the walls at all but if she had I bet my small mannerisms would have taken on significant meaning. That when I swatted the fly that buzzed around my food she would think it was not just a movement of my hand but me saying, “I want to know you.”