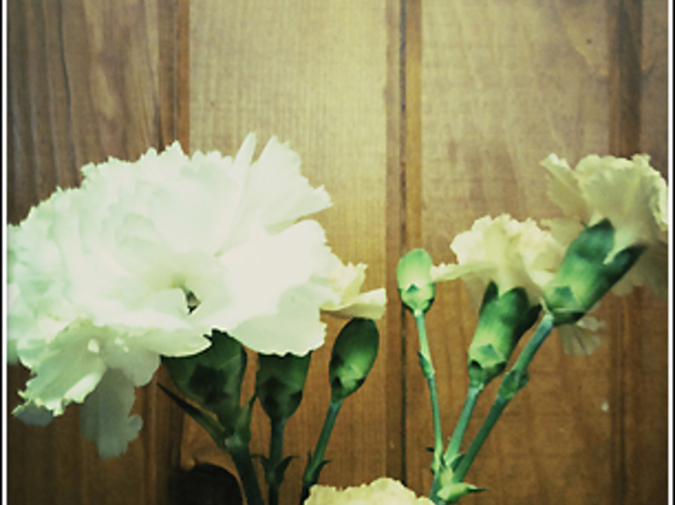 The chemistry started in biology class. It was first period, and Roo had just gotten her first period. She could smell herself. Or she smelled something. It might have been the science room. Weird mushrooms. Plastic. First period always felt wet and new. There was a dew that landed on the morning. The other kids were cheerful, hoping this would be a good day. They sat at desks that were as tall as their waists.

Today they were looking at eggs under a microscope. Or something that looked like eggs. Ovalish orbs that swam and ran into each other, then suddenly divided. Roo was wearing a pad. She didn't know how to do tampons yet. There was a boy next to her.

The boy asked if she would like help holding her eggs in place. She thought he meant her eggs. She turned red. She imagined she was the color of the color of down there. He reached under her microscope and held her petri dish straight. Oh. Those eggs. She leaned over the microscope and looked through its eyes. She liked to imagine that the microscope was a big praying mantis. She watched the egg things flounce and gulp at each other.

She thought of her own eggs floating down her falopian tubes. They had learned about this in Health class, from an orange-colored video where red-colored lines moved through a drawing of a beige-colored body. The Health teacher, Mr. Green, had paused the video and pointed to the screen with his skinny finger. This, he said, is normal. This is not gross. He was being stern and random. What did he mean? she remembered thinking. Why would a red line on a beige body drawing be gross? Roo understood what he had meant now. The smell. The pads wadded up in the woven wastebaskets at her mother's house. And what was also gross was Mr. Green. His breath was sour like old snow and his dandruff flaked onto his sloping shoulders. Mr. Green was sixth period. This was first period. Biology. The biology teacher was Miss Something, and the chemistry was happening between Roo and the boy next to her. She could feel him feeling it.

The boy's name was Sam. His parents hadn't wanted to name him anything, was the rumor. They had wanted to see if they could raise a child. Turned out they couldn't. They didn't have any money. They gave him to his aunt and uncle for adoption. The aunt and uncle raised him well. Better at least. They called him Sam because they liked that name. Seemed honest, strong. Take out the trash, Sam. Go to the bathroom, Sam. He had initially had trouble going to the bathroom at his aunt and uncle's house because it was like going at someone else's house. He hated going at someone else's house because there was the risk that it wouldn't flush. It might go round and round and swim in the water and then everyone would know.

He bent his neck to see in. The eggs looked both impersonal and close under the microscope. Like outer space or a church. Or maybe a big city. You could at once be in command of what you saw and have nothing to do with it. He thought of his game. His game was a video game called Complex. He played whenever he could, usually late into the night. The gist of the game was this: you are a silvery orb floating through a space-like complex, like a star maze. And there are guys lurking everywhere, behind every corner, even though there are no corners, really, because its space. Not really space, but a space-like complex. There are shooting stars: those are good. There are the flat circular ships: bad. There are space animals, planets, etc. but none of them are actual animals or planets. You had to have an imagination.

Sam offered the praying mantis back to Roo. She smiled and one bolt of electricity skidded through his whole brain and body.

Roo looked in to the science eyes. She remembered a carousel in a lonely town she had visited with her family. Her mother had let her go on one ride. Her mother was Indian and dry and only ever allowed one of anything. She had decided on the carousel because it seemed like it lasted the longest. Her mother's hair reached her butt when she let it. It was under a scarf that day. Riding on the carousel horse, getting farther away from her mother and then closer again: intervals of being free. She jolted her head up from the microscope.

This time Sam saw a toilet bowl shape, with water jiggling in it. He saw Roo's new breasts colliding with each other. Then he saw his aunt's bulgy eyes. Do you want me to hold the eggs steady for you? Roo said. Yes please, he said.

He was going to write about one time when his aunt and uncle looked like those two eggs mashing up against each other. White bulgy things touching all over. He had seen them doing it. What they had told them about in Health class. His uncle had taken off his wig and it was sitting on the bedside table like a stuffed animal. He didn't say that. He said: I don't know. What are you going to write?

She said: Do you live with your aunt and uncle? How did she know that? Yes. What happened to your parents? They gave me away. Oh I'm sorry. It's okay. What about you? I live with my parents on Green Hill. Your eyes have green in them. Uh huh.

This was Roo's house: brown couches, brown wood that shone when lamps were on, Indian fabric draped over couch backs, a brother who was still too small to be around for too long, a children's room that she was too old for that had clowns on the end of the bookcases, a mother with hair down to her butt when she let it, a view of thin-bodied trees from every low window, a wooden coffee table with flowers that never died, a dying cat who got hair everywhere, a dead bird that her father had stuffed and erected onto a small metal pin and put up on the wall near a window, wood paneled walls and ceilings, rugs over hardwood floors, lights that hung low over surfaces, warm wood in the fire, usually. She didn't want to go home to dim things. She wanted to stay here, in first period, where it was dewy and light. Maybe she could run away to first period, she thought. Maybe she could land here. But it was more like a carousel, she knew, coming around once a day and then leaving.

After school Sam would go home to his aunt and uncle. They loved him but not like anything new. They would have breakfast for dinner. His aunt sometimes thought that was fun. They would have pancakes and eggs. Roo's breasts would spread out like ovals all over his plate. He would let the yolk swim around and harden. What if her skin did that? Swam around and hardened.

Miss Something walked over them and saw that their papers were blank. Blank as her face. We're brainstorming, Roo said, which worked every time and was also true. Miss Something left them alone. Roo and Sam drew colliding circles that carouseled into each other. He followed her egg-knuckled hand with his eyes. The light from the classroom windows did a thing where it pointed directly onto their table, hit the microscope lens, and then went straight into their eyes. They knew it was love coming for them. They shielded their eyes.

Molly Prentiss has been published in Everyday Genius, MudLuscious, Fourteen Hills, La Petite Zine, Miracle Monocle, Staccato Fiction, and Switchback, and has work forthcoming in >kill author and Ilk. She was a 2010-11 Writer-In-Residence at the Lower Manhattan Cultural Council and is a current resident at the Blue Mountain Center in upstate New York. She lives in Brooklyn as well as on the internet at mollyprentiss.blogspot.com.