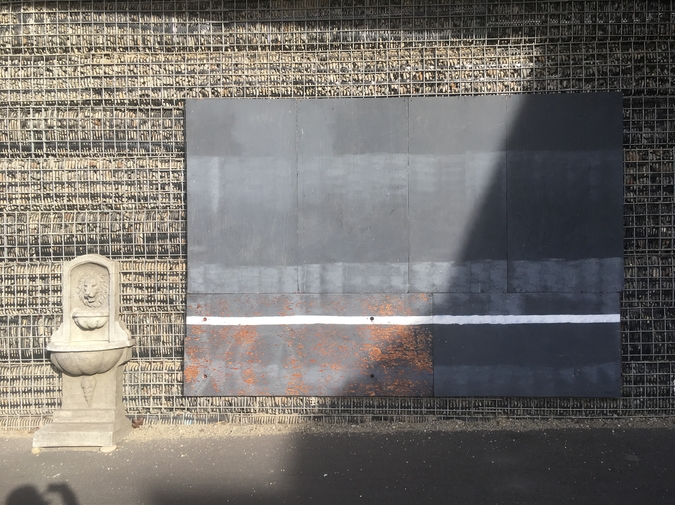 Walking off Ninth Avenue into Raquel’s—my hands shaking, a puke taste in my throat—I wanted to tell everyone everything; the yelling behind me, my quick turn and punch, a man’s body on the sidewalk as I lowered my eyes, weaved back into the crowd and walked away. But I was afraid I couldn’t make them understand.

Before I could figure out what to do—speak or swallow my words—a new waiter burst through the door.

He was a thin, sweating junkie who covered no-money day shifts—fill-ins that none of us wanted—and I couldn’t remember his name. As the door fell shut behind him, he made a sweep between us like a politician. Shaking hands with me, Dean and Guy. Reaching out to Billy, who extended a hand over the bar, his eyes never leaving his paper.

The junkie planted himself in front of us and told us that moments ago, on this bright and golden afternoon, his boyfriend’s parents had stopped by unexpectedly. And when his boyfriend heard his father’s voice through the buzzer, he turned to the junkie waiter and told him in a tone that was calm but firm that he had to get out, just like they’d planned.

The junkie stood before us, silent for a moment. And I looked at him, fascinated, imagining the scene he had just described—the sunlight in the apartment just like the sunlight I’d been walking through moments before, the sound of the buzzer breaking the afternoon stillness.

I swallowed down the taste in my mouth and looked at my hands—steadier now, the feeling of impact fading from my knuckles—as the junkie told us that his boyfriend repeated himself, telling him that they had to remember the plan. They were to stay calm, avoid panic, gather up anything inappropriate and send it with the junkie waiter out the back window, down the fire escape and into the alley below.

His boyfriend ended his speech and buzzed his parents in as the junkie waiter stood, smiling and still.

And as moments passed and the first faint sound of footsteps could be heard in the stairwell, his boyfriend did a quick sweep of the apartment then looped a deli bag filled with cellophane packets and works around the junkie waiter’s belt. The junkie waiter smiled at how beautiful his boyfriend was, and how his boyfriend’s hands were beginning to shake. A twitch took his boyfriend’s mouth and one eye. It was like he was turning into a different person. Off kilter and dangerous but still gentle and beautiful—many things at once—as he backed the junkie waiter toward the fire escape window. And at some point, there was arguing—words back and forth—the backing up turned into pushing, hard shoves to his chest.

But as he was shoved backwards the junkie waiter felt calm. Fascinated by his boyfriend and the way he could change. He widened his eyes and whisper-yelled to his boyfriend that the pushing was too hard—“That hurts,” he said. “Really.”—and the whole thing seemed silly. He tried to explain that they could control this thing that was happening—his boyfriend’s parents descending from Connecticut when he and his boyfriend were on a run. It didn’t have to be like they’d imagined it would be. He lifted his arms to wrap his boyfriend’s shoulders and neck and was shoved backwards against the narrow window. And with the dull impact he realized, this is what this man had planned all along. This is what he’d pictured when we’d had that conversation—this beautiful day, the following of his plan, and then me and this other life he led would just vanish.

His shoulder scraped the rough edge of the window frame as he was bodied like a torn sofa—one leg lifted awkwardly out then the other—onto the rusted fire escape, his boyfriend whisper-hissing an ugly little stream—

Then the world turned topsy-turvy as it would in a movie—a moment of vertigo as he stepped onto the fire escape’s rusted metal bars—the sky becoming ground and the ground the sky. His boyfriend’s red-splotched face above him like an angry little sun. Below him his sneakers peddling over each metal rung.

And the junkie waiter said that while this was happening, the world upside down and his boyfriend’s words a soundtrack in his head—“being such a stupid little selfish little, just, such an ugly little dirty little. Fucking! You know, I have a life and you’re not going to ruin it. You stupid little trailer trash selfish fucking…”—he still didn’t feel a thing other than the sting on his shoulder. Nothing on the inside that he could name.

Then the window above him shut and the sound of his boyfriend’s voice ended.

Standing there before us in Raquel’s, looking at the sunlight in the room, he said that even as these things were happening—the buzzer, the footsteps, climbing down the fire escape and realizing that something huge had taken place—it was like he was watching something on TV. He was the person he was—living his life—but he was also a character, a junkie, in an alley on TV.

And then he realized where he was. On the crabgrass and butt-littered pavement of the alley behind his ex-boyfriend’s building—beneath an apartment and a life he used to live—looking out toward the light where the alley met 45th Street near the corner of dirty Ninth Avenue. And it was at that moment—seeing that light and realizing that other people were together in the world in that very same light while he was in an alley watching himself on TV—that he finally felt something: an overwhelming, honest and simple sense of sadness that felt like a beautiful release.

He paused, stalled out for a moment in the story he was telling. He looked around the room at each of us in turn as if we had been in the alley with him. As if there was no difference between the moment he had gotten to in his story and the quiet golden moment that all of us were in as we listened to that moment from our own private worlds. As if what we were imagining was the same as what had happened.

He looked in my eyes and said that it was at that moment—as he was standing in the alley looking between the window where his life had vanished and the light and normal people out on 45th Street—that he saw him. That beat cop from the neighborhood. The new one with the biceps and beautiful face.

And the cop, seeing him at the very same moment, stopped. Broke stride in the light of the street amidst all those bodies and turned to face him where he stood.

The junkie’s sadness morphed into panic. He was sure that the cop was going to pick him up since the same cop had seen him so often behind the Adonis. And now the cop had him trapped, alone with nowhere to hide and with jail time looped to his belt in a used plastic bag.

But for a moment the cop stood still. And it was in that moment when it was unclear what would happen next—the junkie’s heart racing and his breath coming fast, his feet frozen and the fear inside him making his bones and muscles as weightless as sunlight—that the cop put his big cop hand below his thick cop belt, grabbed his cock through his blue cop trousers, and yelled down the alley, “Hey! Fucking fag boy. I’ve got you fucking now! I own you now you little alley fag.” The cop tensed like he was going to run down the alley, then he cocked his head to the side, put on an exaggerated smile, raised his eyebrows and held that position, mugging.

And then the cop did a little salsa quick-step—forward-forward-side-back-back—his hips feeling it and that smile on his face.

Then the cop’s face went professional and he walked casually away.

And with his story now told—and with a smile and slight salsa quick-step—the junkie waiter turned and walked out of Raquel’s, leaving nothing behind him that anyone could see but the golden sunlight in the place he had been.

Matt Basiliere’s stories are forthcoming or have appeared in Solstice, KGB Bar Lit, Eclectica, Verdad and other publications. His work was selected as a New Millennium Awards for Fiction finalist, and his poetry has appeared in Ghazals for Foley, an Hinchas Press publication celebrating the spirit, life, and work of conflict journalist James Foley. Matt is a graduate of Hunter College in New York City and holds an MFA from the University of Massachusetts, Amherst.