He Maketh Fire Come Down 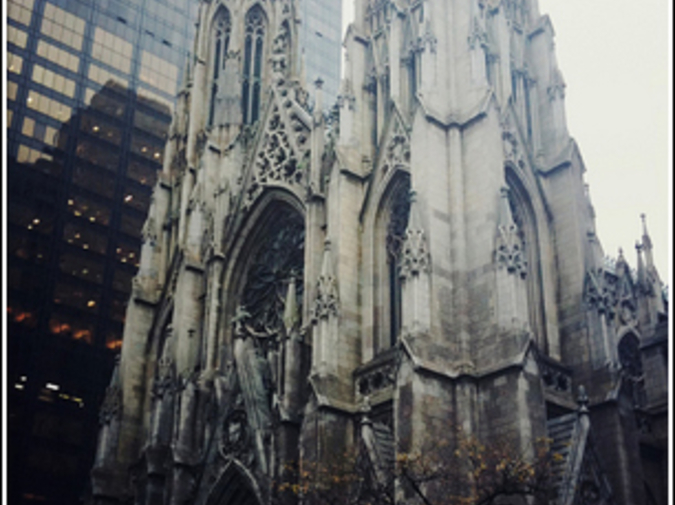 He was on the TV again. That pudgy-faced man strutting up and down the stage. Preaching about the downfall of the species. Working himself up again until he got down on the balls of his knees and cried like a baby. We were watching him, my husband Nick and me.

Goddamn it, Nick said. Goddamn why does he have to be on every time I turn on the TV?

I said I didn't know. Maybe it was because some people liked him somewhere out there. Some kind of sad, hopeless people that slept with their guns and put knives in their doors.

That man was really having at it that day. He was stepping high into the air and proclaiming the evils of the liberals, the follies of the progressives, saying even Lenin and Marx had to answer to God someday.

Fuck him, he said. Fuck them.

He was on a display at the bookstore. Nick and I went there to look through the back issues of National Geographic. I liked to imagine myself a giraffe tripping through the brush and Nick said he could be a hippo, bobbing there in the dark.

Christ, Nick said, nearly knocking over that cardboard cutout. In it that man was holding a book in his hands and a sign that offered ten percent off the new hardcover edition. Fucking marketing trash, Nick said. Fucking trash.

I said, These are the types of books that end up in old women's yard sales. Scattered among the closeout bins.

Another sign sticking out of the stack of new books said that man was going to be at a signing later that week. Said you could even bring in your merchandise and get that signed. Your door mats and magazines. Any and all of his twelve previously published volumes.

Nick spat on it and shuffled along.

So I pulled on a shirt and we went to get breakfast in a little diner across the street so we could watch them line up.

Each one of these people votes, Nick said. I mean, fuck, they get out and vote.

I was watching this woman across the place. She was looking at how pretty she was in a mirror on the wall.

I was watching the woman in front of the mirror, so I said okay. You do that.

He was on the TV and across the street at the same time. I sat in that diner and watched him pray for retribution for the socialists and wondered just how somebody could do that. I had a lot of time to wonder because Nick was giving that group of idiots a piece of his mind. Didn't really figure I needed to check in on him.

When we left it was almost dark and I could tell right off something wasn't right. He was quiet. When I turned the radio up because a good song came on he reached for the dial. I asked him what was the matter but he wouldn't turn away from the window.

We got inside. I hung my bag on the hook by the door. I said Honey, what's wrong?

We need to talk, he said, grabbing a chair from the table. I've been doing some thinking.

You have? I said.

I have. I believe in the wonder and majesty of George Washington and the simple poetry of the Constitution. There is no greater concern than the spread of infant ideas by infant minds. Mine and ours are destinies linked by the same great road many great men have travelled. There is no one God but the one God.

I asked what he was talking about and he said it was time that we stopped fornicating in such a varied way. Any good wife of God's, he said, would submit herself only in the true and proper fashion, that of submission. That he had a burning heart that beat with the words of Christ and Madison.

He was on TV again, preaching to us the value of productivity. John and Abigail Adams went to bed by a quarter 'til nine and so would we. We needed the energy to stand up to the lies and smears of the president and his gang of biased news networks. No one could speak ill of that man on the television and get away with it.

Nick turned off the lamps by the bed and put the TV on the channel that man's always on. By the count of his voice we made love and delivered unto him a new generation of founding fathers. The segment was over by the half-hour and it was on to learning our history and our future.

After that man was off the television and we shut it down, I stayed awake while Nick drifted into an easy sleep. My mind was racing about what that man had said. I had heard him say we held the new tomorrow in our hands. I wanted to ask Nick what he thought that meant. I wanted to ask him about all of the changes, about how everything was turning into something else. How quick it all was. I reached for him, reached to turn him toward me, and my hand caught him there in his chest. My fingers stayed even though they burned. There it was. That curious, curious heat.

Jared Yates Sexton works as an Assistant Professor of English at Ball State University in Muncie, Indiana and serves as an Assistant Editor at Bull. His stories have appeared in magazines and journals around the country.