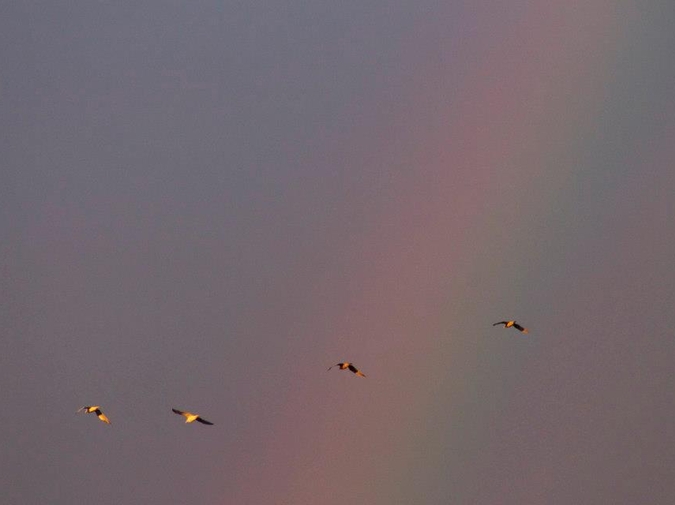 God moves me up from the Shrub Design Department—an easy, non-intelligence job where I scribble messes of twigs—to the Wind Durations Department. God makes all the adjustments himself.

He shows up in front of my desk wearing a car mechanic jumper and wiping his hands on a rag. His badge reads: Alpha & Omega. “You make nice shrubs,” He says. “How are you with wind?” I shrug and ask him if He thinks I’m good with wind. He smiles and nods his Head. “I know you’re good.” He crouches down low and looks at me straight in the eye and says, “I know everything about you.” Then He cackles and stands back up. I laugh but I’m nervous.

So now I'm here, holding a mock globe, learning to work the wind on earth. The person in this position before me was, well, God. He said He needed some help. Of course I didn't lament because God won't have any of that.

He comes to me wearing a lab coat this time. Liquid mercury is rolling off his shoulders, down his beard, and landing around his bare feet. “It's pretty simple,” He says, “you getting the hang of it?” Again I shrug because I know He knows, and He likes to do this joke where He says, I knew you were going to say that before I can answer.

“I knew you were going to say that,” says God. He slaps me on the shoulder with a spark of epiphany and booms out a laugh that smells like a newborn.

“So if I were to blow in this direction—” God blows towards the Caribbean islands, a cold fog coming out of his mouth “—what would happen to the east coast of Florida?”

He already knows if my answer is right or wrong. I look into His eyes. God doesn't squint. His eyes are open and wide and did I mention they are green? The kind of green that is perfect? You can't look at them for too long either, because He starts to put things in your head. One time when I asked, what do you mean? He stuck an image in my brain of a rhino inside a small camping tent. The rhino didn’t poke a single hole and was able to calmly work the tent’s zipper. God's mind isn't like everyone else's; He can make sense of all things.

I answer him and He allows me to answer: if the wind current is heading west at a temperature of fifty degrees Fahrenheit, and about twenty miles an hour, then the ocean will swell around five feet on the east coast of Florida and dropping as it moves up the east coast of the North American continent. Fishermen would see fit to not go too far from the dock because the catch-of-the-day would come to them.

God moves his head side to side and frowns. “Not bad,” He says. “Now what if I were to do this?” And God pokes his finger into the Pacific Ocean and begins to swirl it in circles. He’s not careful—his finger bangs into the side of Chile, then pushes Hawaii way up north. God crouches down low and He looks wild, smiling and showing his teeth. It bothers me and I ask for the globe back, which He does, then slaps me on the shoulder before walking away. Sure He's God, but Jesus Christ.

The explosion and smoke of bright colors is the first incident. God rushes out of the lab coughing, his goggles caked in dye. He sees us outside and no one asks if He's all right because He is The Almighty. He laughs and looks back at the lab. Some galvanized sheets from the roof are blown off and bent in a frightening twist, wobbling on the ground.

“Now that’s a big bang,” He says, releasing some tension. We all laugh, hard, and keep reaching for more laughter deep in our heavenly bodies because it distracts us from thinking the same thing: God is slipping.

Employees from the Creation Department avoid their worries about God by causing pain to themselves. Nothing too drastic. I scramble my thoughts by jamming a pen in my eye. I now wear a patch and receive compliments. Cute Daisy takes the steamer that is used for de-wrinkling the white robes and scalds her face swollen. Boyd eats Heavenly Baking Soda, which is used as a staple for a majority of creations, until he’s sick. Gordon masturbates and feels guilty. Lisa drops her Planet Project on her foot, the same density as an actual planet, but bowling ball size. Frankie clips his wings and it hurts like a motherfucker. Calvin doesn't do anything to hurt himself. He just runs away. No one’s done that before.

Animal Creation Day is when God supplies the demands of certain species. It's a regular chore, an easy wiggle of the finger. But even slamming our heads in doors isn’t enough to distract our thoughts when God accidentally releases misshapen giraffes, and everyone sees the show. Some don't have stiffness in their necks and gallop with their heads dragging between their legs and behind their bodies. One giraffe has at least six extra heads. Some are missing a leg and a few are missing all of their legs and are barrel rolling over recently grown celestial shrubs. Then there is one giraffe that looks normal but seems to be in pain because it's shouting in the clearest and most pleasing British accent, “I'm in pain, please help, I don't feel well at all.” The really hard part is watching God try to wrangle them up. He doesn’t look at us. He just keeps his eyes focused on his Unfortunates like it’s all part of the plan.

Just as I'm getting the hang of statewide wind gusts, He moves me up to Rock Layers. By the time I'm flicking igneous intrusions between three different soils, He moves me up to Humility Quality Control. And then He comes to me wearing a barbeque apron that reads: Kiss Me Gentiley, I'm a Jew.

“You organized?” He asks. We stare at each other and then He says He wants me to be his scheduler. He says He also wants me to follow him around and take notes and dictate what He declares and also be a reminder of appointments. “Be my assistant,” He says. I wrinkle my forehead to stretch my brow—still healing—which causes me a tinge of pain because I had a brief vision of Him, sullen and rolling one of the giraffes back into his lab to disassemble. I accept his offer by saying yes. He says He's pleased and tells me He wasn't sure what I'd think about the offer. I smirk because I think He's joking. But He doesn't laugh. He slaps my back without an epiphany spark, and his breath smells like breath.

Heath Wilcock is an MFA candidate at Arizona State University and currently serves as the Special Projects Editor for Hayden's Ferry Review. He lives in Tempe with his wife and four-year-old daughter.